UPDATED JULY 10, 2009
For some reason, the transmission had no closed caption, I tried all my TVs but none had it. Closed Caption helps me when Dr. K says her long winded speeches.
Episode Summary: 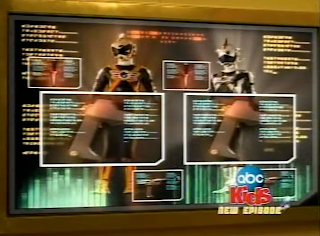 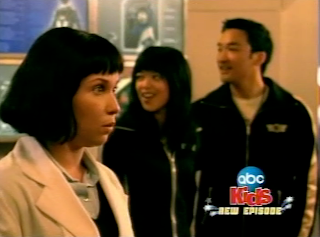 Dr. K has a meeting with all the Rangers and explains that her 'dear friends' Gem and Gema escaped through their 'Gold and Silver Series Morphers.' They have been fighting the Venjix in the wastelands. They say they like to shoot first and ask questions later, making the main five a bit uneasy. Meanwhile, Tenaya and the two generals enter the city. They plan to take away the city's oxygen. Back in the base, Dr. K says the twins have confronted her that she has treated the five coldly in order to prevent emotional trauma (like when she thought she lost Gem and Gema). Everyone denies her on being 'bordering on coldness.' 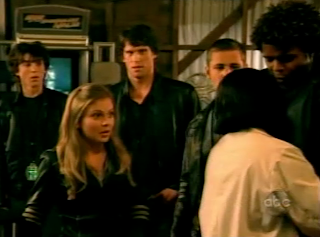 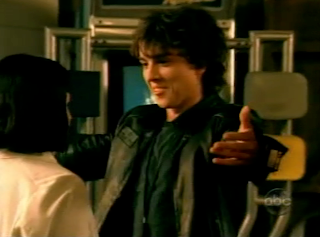 She says that 'as your mentor'--- Ziggy interrupts and says that they are older than her. So as their mentor, she proceeds to say something she likes about each of them and then say their real name. And then she uncomfortably hugs them, starting with Scott. Gem and Gema encourage her. Dr. K admires his honor, integrity, and hair... As for Summer, she says that as the only other female in the group, her feelings for her override her instincts to sabotage her in effort to get the attention of the males. Summer says the feeling is mutual... she thinks. Then for Flynn, she likes his passion, optimism and delightfully musical but sometimes incomprehensible accent. When she gets to Dillon, he tries to duck out (leave) but Flynn stops him and she says that he is psychologically unstable but considers him a true hero. Ziggy waits for his hug and she says 'You too Series Green.' She wants them to know she loves them.

Flynn wants everyone to agree that never happened. Ziggy is upset she hasn't said anything nice about him and the alarm goes off and he just can't let it go. They go off. Ziggy spells his name. Dillon grabs him. Meanwhile, the generals play with the air exhaust and make damage. The five Rangers morphed arrive and fight the Grinders. Blue helps Green, Yellow fights the Generals, Black fights Tenaya... Tenaya gets to the controls and a big fan sucks everything in. The Rangers hold on to dear life. All the Grinders are sucked in and sliced and destroyed. The Generals for some reason seem invulnerable to the sucking. Yellow gets loose and Black saves her. Green gets loose and heads for the fans.
Commercial Break.

Gold and Silver arrive and smash the controls and the fan stops and Ziggy falls, saying he was not worried. The enemies leave, silver and gold go after them, Scott's dad wants them to fall back, Red stands in front of the twins and tries to stop them from going outside. Red says they have to defend the city, Silver and Gold say, "But who says?" The seven and K are in Truman's base and he wants them to stay inside. Gem and Gema want to go outside, Truman wants to seal in the enemy but diverting the energy of the shields. Meaning, they will not be able to open the shield again for a long amount of hours. The twins have another plan... the bad guys have an outpost outside and they want to blow it up.

Truman is amused ("you make it sound so easy"), Hicks tell them that they will be living on air for only 30 days until fixed and they can't let it be hit again. Gem and Gema head out, Truman says once he overcharges the shield, he can't let them back in, Gem scoffs like he doesn't care. Scott thinks they might have a point. Truman ask, "What are you two trying to do?" "We are trying to win. Why? What are you trying to do, colonel?" The twins answer. Back at the evil lair, Venjix brings out his new Vacuum Bot (Vacuum Banki from Ep 18). Back at Dr. K's lab, Ziggy keeps bugging Dr. K to see if she wanted to make another announcement. Scott and Summer show Dr. K a line. She says it is prehistoric underground river bend. Scott realizes they might be trying to get something out.

At the gate, Hicks and Scott's dad are about to overcharge the shields. Scott arrives in his car and warns him, that Venjix wants them to overcharge the shields, which they do do. Scott rolls under the gate as it lowers. Truman wants to raise it to save his son, saying he is trapped out there, Hicks makes him realizes that they are trapped in there. After the commercial break, Gem and Gema arrive to the outpost and see the air tunnel. Scott arrives and informs them with the new information, that the are sucking the oxygen from the city. He wants to them to split up, they say they don't ever spit up. Scott says there is a first time for everything and grabs them. Silver and Red enter the cave-like place full of Grinders. Gold fights the Grinders and Generals outside.

In the city, Dr. K says that Scott and the twins were right, oxygen is leaving. There is no way out. Station 19... they can escape through there. Dillon says it only lets go flames at dawn, so Flynn says they re-program it. Dr. K says the problem is that now that the shields are overcharged, the fire is bigger. The four run off. Red spots the Vacuum bot sucking up air. Silver runs in, Red pulls her back and tells her a plan but she runs off anyway. He tells her the pressure is too high. At the gate, Ziggy still complains about Dr. K. They morph and use their individual powers to get through the gate (the stop time, the shield and teleporting, etc.). Back at the outpost, Gema fires and Vacuum Bot explodes out of the cave. Silver and Red fight the bot. Meanwhile, Green wants Dr. K to say kind words from the self-proclaimed Mentor or he won't move, Blue pulls him to safety as fire ges ner him. Tenaya coughs as she gets out of the cave. She gets in the fight with Gold.

Gold tells Tenaya and the generals to wait where they are in order to join in with Red and Silver. Tenaya leaves, saying they will be destroyed. The three destroy and blow away the bot. He is made bigger and ValveMax arrives and fights it. Red calls for his zord and they make High Octane. The bot sucks in their sword and sucks in the finisher from ValveMax. Dr. K sends the two zords of Gold and Silver and they combine with High Octane Megazord and they say "you are toasted" as they destroy the monster with a new finisher. Back at the garage, Dr. K reprts that the oxygen levels are back to normal. Dr. K gives each Ranger a compliment on the battle in order to improve her role as their mentor. Ziggy complains again that they are older. Dr. K tells Summer she has nice shoes. She compliments Gem and Gema and goes to Ziggy with a bright smile (big scary) and calls him "You." The alarm goes off and everyone runs off. Ziggy says it could be the last time she ever sees him.

Review:
If you can't see the ep today, you didn't miss much. We don't see the twins morph and we don't get the names o their zords. If fans complained about Gem and Gema finishing their sentences and being too goofy, then they will be complaining now. The only difference in their personality is that they like to blow things up. Anyway, it was really really funny, I have never laughed so loud for a Power Ranger episode in a long time. As for why Red split up with Silver, that is from the Go-Onger footage but they didn't use any except for the megazord! Anyhoo, the most funny and emotional parts came from Dr. K and Ziggy, making the possible romance between them that fans are hoping for more apparent.

Posted by Lavender Ranger at 9:21 AM 7 comments:

My computer is still on the fritz and still being fixed and it may still take yet another week. So I am sure someone else will release the new episode tomorrow. I will not be apply to. I have access to a computer but I can't edit or upload anything since it is not my computer. So sorry. I might post a summary about it but not at the same time I usually do it (6am est) but maybe like at 9am est. Again, I am sure someone else can post the episode.
UPDATED 7/3/09 9pm EST
Thank You for the support! I am going through a trying time, almost loosing my information and it is being backed up rather slowly and I will share the whole thing about what happened when its over.
Posted by Lavender Ranger at 12:46 PM 4 comments: