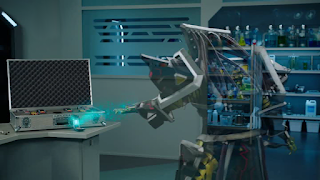 Nate programmed the Ultra Blaster to destroy Evox. Devon and Ravi are guarding Evox. Nate and the others enter the room and Zoey lowers the shields. Nate blasts Evox two times and he flows. A wire from him goes into Zoey's computer, infecting it. They try shooting him but The wall is build up again. Evox laughs. Evox becomes a virus and enters the computer. They destroy the computer. He leaves. He wants to get into the morphin grid. People can physically see him enter computers, workers run out. He appears in the main base, trying to get the access codes. The gang blast computers. Zoey finds him in the research room. The Rangers run into the research room and blast him and a computer. Shaw says someone accessed the vault. Evox glows in and out takes out a Cell Shift Morpher. He repairs himself and becomes whole. 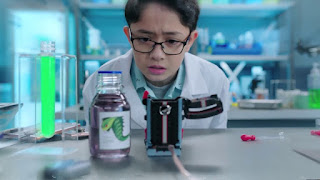 They shoot him and he stops the blast. He says Nate should know who he truly is. He says he experimented with old Ranger technology. In a flashback, Nate tried to power old morphers with Morph-X and snake DNA. He did it to the Shell Shift Morpher and released Evox into the system. His voice changes to Venjix and says he is Venjix. Ravi figures out he was the virus that almost destroyed the RPM dimension. He blasts the Rangers back. He laughs and leaves. Devon asks if it is true. They leave but Nate is depressed. Zoey gets him hot Evox walks through the halls and face ben and Betty. He ties them up. Jax and the beast bota follow Evox. The rangers morph. They find him outside. He creates Robotrona. The rangers fight. Evox pulls Devons weapon away. Nate is hurt and I morph. Evox leaves and Nate cries and leaves. Back at the base, Zoey talks to Nate is mad at himself. He says he absorbed all of venjix code. He lashes out at Zoey. Shaw wants a solution, Zoey says he needs to talk to Dr K, someone who understands him. A portal opens and dr k meets Nate. He knows about the book. They flashback to RPM. Dr k says venjix escaped her dimension and they must work together. Nate doesn’t want fox dr k uses reverse psychology. She says she felt the same and sit down and says the world needs him. Dr K says to take the first step. 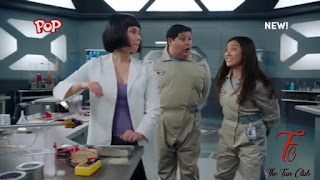 Nate says they can find weakness and dr k asks about the morph x. The others tell Zoey good plan. Evox tells Blaze to upload his access codes to the world. Blaze leaves and he gives the access codes copies to Scrozzle. Ben and Betty offer their help and she gives them a simple task. The rangers fight blaze. Dr k says the arrow is ready and Nate gets the box and defeats Blaze. Nate and Zoey hold hands. Shaw wants Dr. K o stay. She says she has to find traces of the virus in Corinth. They thank her and she leaves through the portal. Then they get an alert. Evox communicates with them saying while they fought Blaze, Scrozzle sneaked the codes to the towers and are spreading his virus throughout the world and they failed. 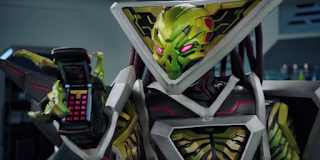 A great episode and Dr. K even did what other episodes could not, reduce Ben and Betty to their essential cameo than outlandish slapstick comedy that serve no other porpose to keep the younger kids entertained for a chuckle. Nate's struggle is just made whiny but Dr. K is such a delight to watch. It is great to see Olivia Tennent again and she is a prescence. Also great to see she is much calmer and mature than she was in RPM, she is a worthy mentor now. Not that she was bad before, but now she has an interesting teaching technique to pupils and more patience. Hasbro hasn't had an easy task with Power Rangers Beast Morphers. To appeal to Mighty Morphin fans (with Ben and Betty, Riptide gym, martial arts and Jason), RPM fans (with Dr. K and Venjix) and references to other seasons. They want a serious seasonw ith light moments, but also stuck doing Bowlderiwse with morals and lessons for Nickeldeon or the Moral Guardians (parents). That being said, they have done an admirable job, not perfect but at least they are trying. As for the storyline of Evox being Venjix, it was handled very well. Andrew Laing voiced Venjix in RPM and is credited as Randall Ewing in Beast Morphers. So it is great to have his voice actor back, which is unlike the mess made with Breaking Bad, with different voice actors used for characters and especially Goldar. It wouldve been nice to have the original Goldar voice as his voice is so iconic.

Posted by Lavender Ranger at 8:56 AM No comments: