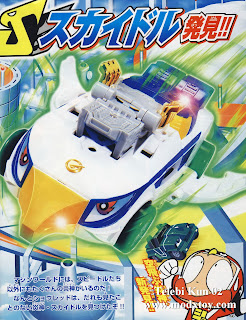 As expected, we are getting a repainted Speedor, his name is Skydor. I don't know yet if it is an upgrade to Speedor or a relative. 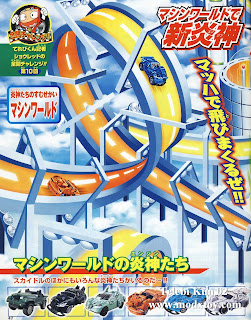 But now there seems to be more Engines. The zords from the Power Ranger RPM Torque Megazord are much elaborate. But I am sure since the Engines below look like the other Engines on the show (puppets/models), they will appear on the show again. Some of them appeared on the show's first episode. But you never know. 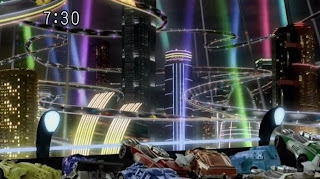 I was curious about the zords from the Torque Megazord and the extra mini zords and everyone has said things here and there but not a full list. And I think a reason why people haven't said what the zords are. --Let me clarify I don't think this will appear on the show.

My guesses:
Torque Megazord
Purple bat/race car?
Blue bird/drill car? at first I thought it was a Enchilla but looks more like a bird
Black panther/fire engine---looks like a panther to me.


UPDATE 2/9/09:
Yeah, the Engines from above only appear in Episode 1. SkyDor is a toy-only deal.

Maybe it is too early to be jumping the gun, but I am already thinking about if the American version of Kamen Rider franchise becomes a franchise and if Kamen Rider will follow in suit of the Power Rangers, in changing the gender of a male Rider to accommodate the fact of the lack of female Riders. Kamen Rider Dragon Knight's source Kamen Rider Ryuki (2002) has one female, while the series that follows it: Kamen Rider 555 (2003) has no female rider. That is also provided that Kamen Rider 555 will even be adapted. 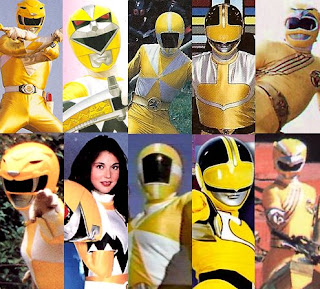 [chest to boobs: Zyuranger(1992)/MMPR(1993), Gingaman(1998)/Lost Galaxy(1999), GoGoV(1999)/Lightspeed Rescue(2000), Timeranger(2000)/Time Force(2001), and Gaoranger(2001)/Wild Force (2002).]
In five Super Sentai series that were adapted into Power Rangers, there were just one female in a five-ranger team, so a yellow male ranger became female. For those who don't know this or never noticed it as a kid, this is why some Yellow Rangers had no skirts like the Pink Rangers. Contrary to popular belief, most Yellow Rangers in Japan are not female but male. Anyhoo, one would ask: Why even add a female Rider? Well, I figure they would want to keep it balanced (some what) and don't leave little girls feeling left out. And have someone else than the dasmel-in-distress role that all the Kamen Riders have. I know that the people behind the American Kamen Rider want to stay away from Power Rangers, so they might not even follow in suit. 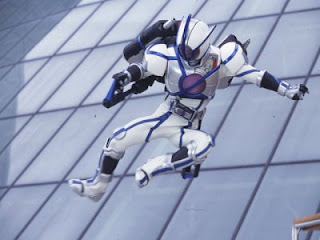 But just for the hell of it, I would like to point out my guesses to which rider would be most likely to be gender-changed. Even though I think it is ridiculous to assign a certain color to a gender or even think one suit is more feminine than another, I go with my gut instinct to what a producer would think would be justifiable to the American society to what could constitute as a female suit. First up is Kamen Rider Pysga from Kamen Rider 555 (2003). He was a pretty much masculine character but his suit could go for either gender. For American audiences, I think it is buyable as a female suit. Unfortunately, Kamen Rider doesn't have easy to pick male to female suits like the color yellow. 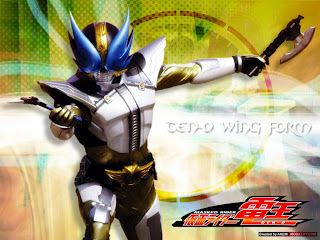 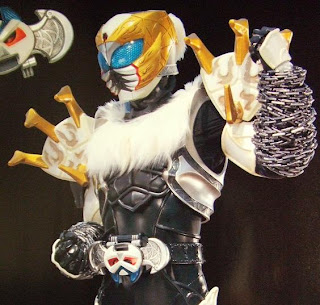 2008's Kamen Rider Kiva has Kamen Rider Rey, whose furryness doesn't look completely feminine but I think it is the white color. Also, there is Kamen Rider Ixa and Saga, Ixa's both forms have been don by women but doesn't look as feminine as Kamen Rider Saga, whose suit can be buyable as female.
Now, the American company can be creative and make their own female riders, I would find that just plain awesome. Here are some of my ideas...

Kamen Rider 555
"Kamen Rider Lambda"
Her color scheme is green and light blue and black. This is the most gender-neutral of my four designs, I liked using green and there was no green in the series, so I thought this would fit in. 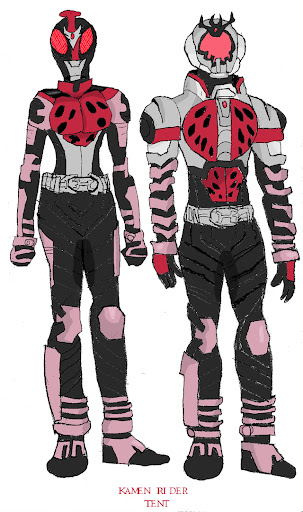 Kamen Rider Kabuto
"Kamen Rider Tent"
Her insect is the Lady Beetle, her color scheme is red, pink and black, since Kamen Rider Kabuto is a darker red. I made her knee-caps and other attachments pink like how Kamer Rider Bee and Kamen Rider Sawsword has theirs in their colors. For the Masked Form, it was hard to make her look female. 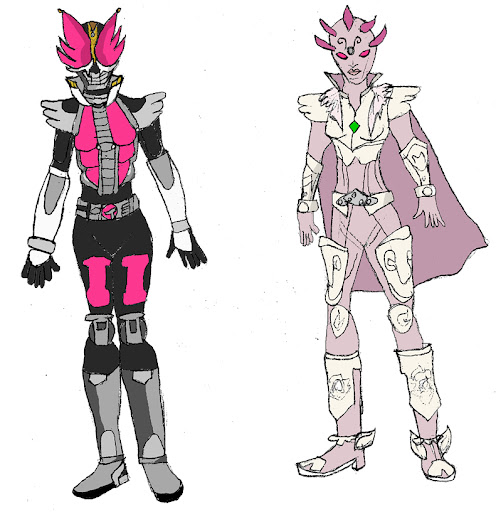 Kamen Rider Den-O
"Kamen Rider Larius" / "Rosetaros"
I thought the name was pretty. Her color scheme is pink. Her Imagin is Rosetaros, I tried giving her hot pink armor but I think this cream one is a little more tasteful. I am aware that the Kamen Rider looks like a mash-up of Den-O's Sword and Wing forms.

Kamen Rider Kiva
"Kamen Rider Bride"
Her motif is based off the Bride of Frankenstein and her color scheme is grey-ish black and rasberry red. Originally, I wanted her cream white and black but I fell into the pink/red bag. I know her hair is a bit unpopular but I am happy with it. I couldn't come up with a color for her eye visor, so I thought of yellow-orange.