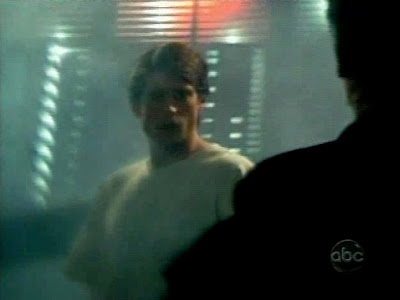 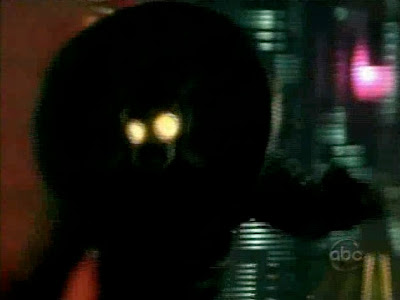 Dillon is walking down the stairs and into his car, he drops his morpher and has his pocket watch in his other hand. He stops in his tracks as Dr. K's door opens and we hear the watch music play. Dillon checks the end of his chain and there is nothing there. He walks toward the room and he groans as he gets a flashback as he twirls around. Suddenly he is elsewhere and sees a man with his pocket watch. He takes it out of the man's hands. The man turns around and it is Dillon and he asks "Who am I?" Dillon puts his hand in the air and then becomes the Dillon in the gown. A woman with a walking cane comes towards him and is attacked by Grinders. Dillon tries to save her but she falls and he grabs her hand and tries to pull her up. He is pulled away from her and she slips and falls. A bot with a satellite (Go-Onger Episode 11 Antana Banki) comes up to him and asks Venjix if he should do the upload on Subject D44. It is take his memories. 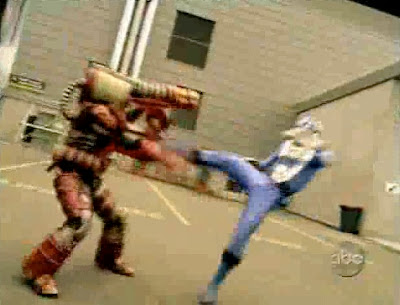 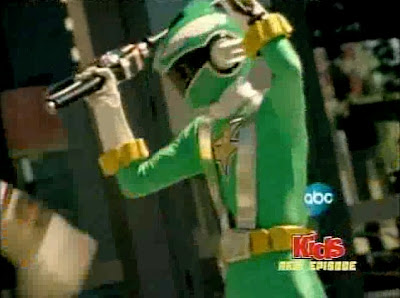 Dillon wakes up in a cold sweat, the Rangers are after two signals, one is trying to destroy the city's dome shield. Dr. K tracks the signal. Summer asks Dillon about his dreams and he lies. They race off and morph. At the evil lair, Venjix shows the generals what is going on. They fight the red Go-Onger Episode 13 monster Hikigane Banki (a water gun). Black and Green fight the monster and Black tells Green that he needs a bath. They get washed out by the monster, Yellow and Red try to fight him but he is hard to defeat. Dr. K tells Blue to conduct 'Wishbone Alpha,' which has nothing to do with a wishbone. Blue uses his time stop to beat up the red monster and they use the RPM Enforcer (5 weapons in one) to defeat him, he then becomes bigger because bigger is better. Zenith Megazord plays tag with the monster and then destroys it. Crunch says something against the monster and Venjix blasts him. Tenaya is to go to bed but Venjix wants her to stay, she says it is his fault since he gave her human body and emotions. Venjix's plan is to keep sending down attack bots while the shield is disrupted by his most reliable bot. 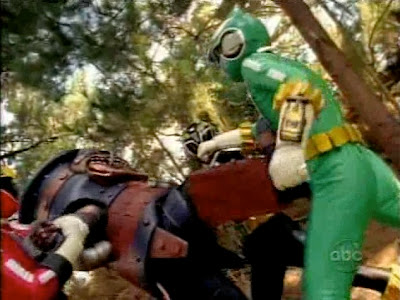 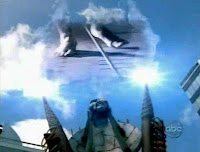 The Rangers then fight Kama Banki of Go-Onger Episode 14 in the forest, it is a big vat with teeth, which bites Ziggy. Dr. K has pinpointed the moving signal finally. The Rangers fight the monster with their individual weapons and then finish him off with the RPM Enforcer. The team then splits, Ziggy and Dillon go to the signal and the other three go to the 'alarms.' With all the cars are screeching, I wonder if they are using fuel-efficient cars. Ziggy and Dillon find the monster on top of a building. Dillon faces it and recognizes it from his dream/flashback. The bot says he still holds his memories and shows it to Dillon, he now knows it was not a dream. Dillon morphs and fights the bot. 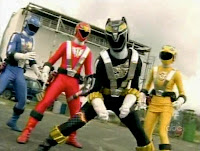 The bot says his modifications are incomplete and he can fix that, he zaps his arm. He then zaps up in the air, effecting the climate controls. Ziggy jumps in as Dillon is capped from above, falls down the building and Ziggy saves him by teleporting mid-air. Their helmets come off and they stand up. K and the colonel track the monster. The trio says they are finished at the docks, we didn't see who they fought. The trio meet the SatBot and fight him. K tells them to destroy it. Red is about to but Black stops him, telling him it has his memories. The bot runs off. Dr. K wants it destroyed. Summer is for not destroying it, Scott says they have no choice and tells Ziggy to 'get him.' Ziggy teleports and fights the Satbot. Black is against it. K says she has no choice but to put him offline. Black fights it and sends a big signal of energy pouring through the other three, bringing them down. 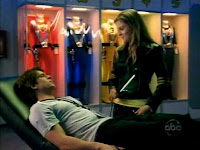 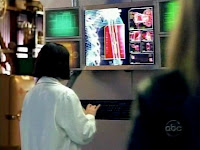 The Satbot attacks upward and the blasts come down, blasting the five. Black gets up, saying about his memories, K tries shutting him down again, he says he doesn't shut down so easily and fights it again and then fights the bot. Black wants the memories back and now the Bot's hits don't phase him anymore. Black says it is over for him and beats him up. He then wants to destroy it. They form the RPM Enforcer, the Satbot says the old memories are all he has, Dillon says he has something else.. new ones and destroys the monster, not before him saying he'll never know the truth. The shields are then at 100%. Venjix is not happy. Tenaya goes to bed. Dillon is being analyzed by Summer and Dr. K. Dr. K says that SatBot activated a dormant virus inside him, meaning that the machinery inside him has restarted self-generation process that is growing. It will grow until it takes Dillon over entirely, there is no cure.

Episode Review:
It seems that the showrunner Eddie finally realized he had to get cracking with the footage and skip some monsters, and this case squeeze in a couple of monsters. They didn't use Episode 12 robot, which switched minds with the red ranger, so maybe they will use that for next week. Anyhoo, interesting they went back to the Dillon backstory, of course we are not going to find out everything so early, so they are going to spread it throughout the series. And the Dillon/Summer relationship hits a snag as Dillon isn't exactly letting Summer in. Also, I think it is a bit curious that Dillon switches his mind rather quickly to destroy the monster. This is another rushed episode and could have been a 2-parter.

This episode has no watermarks.
Posted by Lavender Ranger at 7:53 AM 5 comments: 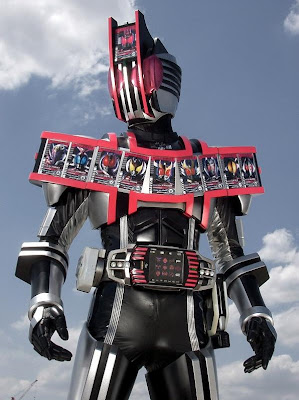 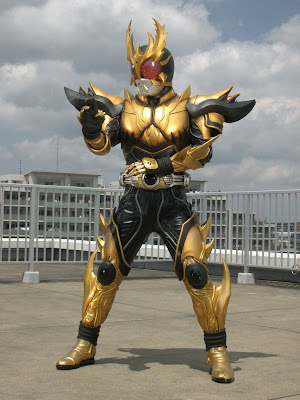 My friend says the song Dr. K plays on her violin is from the baroque period, but doesn't know the name. And the other classic music in the episode in this is Chopin.

UPDATE MAY 17, 2009
Thanks to Ballerinafairy, it is not baroque, it does sound like Paganini's Caprice.
Posted by Lavender Ranger at 7:48 AM 1 comment: