UPDATED DECEMBER 31, 2008
I am most obsessed with heroines and since Kamen Rider is mostly a 'boys only' club, I decided to cover the quite few female Kamen Riders that have graced the screens. 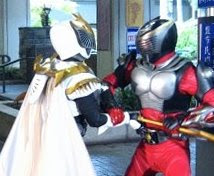 Kamen Rider Femme (2002)
She is the first official female Kamen Rider. There was debate if the character, Tackle, from Kamen Rider Stronger was a Rider, but it was agreed she was more of a sidekick rather than a legitimate Rider. Femme's true identity is Miho Kirishima, and was portrayed by Natsuki Kato. She was only in the movie Kamen Rider Ryuki Episode: Final and in the costume a cameo in Kamen Rider Ryuki: 13 Riders. Her power was of the Swan. As for action figures, there is a articulated Sôchaku-Henshin figure, a vinyl figure, and a small bust (which I own). She will appear in the upcoming American Kamen Rider: Dragon Knight as Kamen Rider Siren and I am told she will appear for quite a few episodes.

In Kamen Rider 555 (2003), many people who transform into the same armor or 'gear.' Where many men would wear one gear, one female would. One girl (Rina) wore the Delta armor but was kicked out of it a few seconds later. Both Yuri and Megumi become different versions of Kamen Rider Ixa in the Kamen Rider Kiva movie (2008). 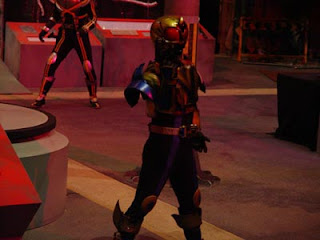 Kamen Rider Alpha (2003)
Even though not official (stage show Riders aren't consider canon), the Alpha suit was used by a female in the Kamen Rider 555 stage show. Pictures avaliable here in this Japanese site. 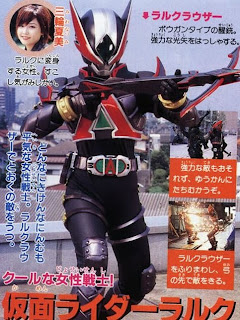 Kamen Rider L-arc (2004)
Her true identity is Miwa Natsumi and she was portrayed by Yoko Mitsuya in the movie Kamen Rider Blade: Missing Ace. She is sometimes called Kamen Rider Lark or Kamen Rider L'arc. Her rider name, "Larc", is French for "Archer." Miwa Natsumi originally applied as an office worker, but was berated by the boss. As a result, she knocked him out after having enough of his words. She was handpicked, along with two others to become the New Generation Riders for BOARD to capture the Undead released by the Albino Joker. As for toys, she has one vinyl figure. 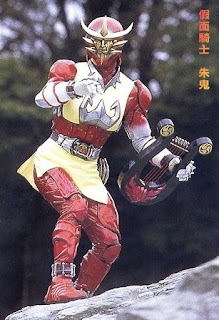 Kamen Rider Shuki (2005)
In the series Kamen Rider Hibiki, she appears in one episode. All the warriors had motifs of instruments, hers was a harp. Although she is in her 80's, Shuki used her power to assume a form that resemble herself in her early 30's. When she was young, her entire family was murdered by the villains. She used this as a reason to become an Oni. She used personal grudge and not the desire to uphold justice and protect the weak as a reason to fight. Unlike the others, the demon face took over her helmet. She ended up killing herself to get her revenge. To me, her outfit was tacky. She is the only Kamen Rider to ever have a skirt. She is the first female to actually be in the TV series, not a movie. She only got a small gasphon figure.

A second (fourth overall) female Rider for Kamen Rider Hibiki by the name of Mishiki went as far as having a DX Otoukenban marketed and a prop suit made for her before she was dropped.--This has been repeated in almost every Wiki-like page or blog, but no picture or backup. Since 2005, there has been no more female Riders, I can't wait to see what comes next.

To prove I will not only be covering Sentai, but other Tokusatsu. 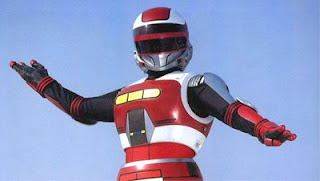 I always wondered this and I got my answer last year when researching to do TokuCentral.com VR Troopers got its footage from the now-defunct Metal Heroes series of Toei, in fact three series. The series Jikuu Senshi Spielban (Spacetime Warrior Spielban) was where the footage of the transformed JB and Kaitlin came from. Kaitlin's counterpart was Diana Lady (above) but I heard Spielban's sister who was bad, became good and was a hero too. Her name was Helen Lady but wondered how she looked like. 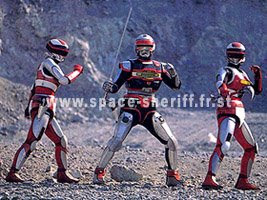 Actually Helen Lady had the same costume as Diana Lady. I thought the costume would at least had a difference but none at all. So instead of having a new girl play her in VR Troopers, they made up ' VR Kaitlin Double Team'---which was that Kaitlin had a mirror twin that was bad but then became good and she could call her when it battle. In Speilban, his older sister was actually the evil Helen/Hellvira who was raised that way and then wet to their side. The armored footage of Hallvira was used for a two-parter where a girl was brainwashed to become 'Red Python.'

So basically Speilban was the only Tokusatsu series (so far) to have one male hero and two female teammates. Most tokusatsu series have two male and one female.

Jungle Fury: It has happened! 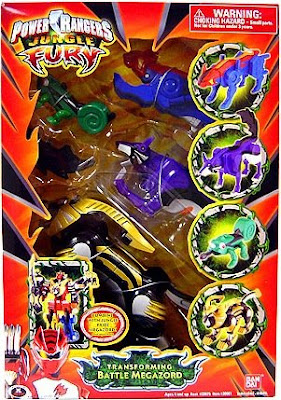 Has hell frozen over? This year, Bandai America has definitely redeemed itself. I dunno if it has completely redeemed itself for the shabby Operation Overdrive line last year, but it has been incredible. The above picture is the newly revealed Transforming Battle Megazord. This product was not pre-mentioned, scheduled or anything else. It contains zords that many thought would not be released because they were released separately in Japan. In this package, there is Lion, Chameleon, Wolf, and a re-painted Jaguar. It is not named but it is colored in red and blue, a bit of yellow, which resembles their group weapon, the Claw Cannon.

I have been wrong before. But, it is getting sort of debatable over the gender of Toripter/Triptor. Triptor is a mix of a helicopter and a chicken. Some believed it was a rooster, but from its hologram, it has a waddle, and 'Niwatori' means chicken in Japanese. Triptor is voiced by a voice actress, Shizuka Ishikawa. Now, it was originally believed that their helper Bomper was female, because he has a voice actress and his pink color but it has been accessed that the actress is simply playing a young boy's voice. Now, some have thought Triptor is a young boy, but the voice clearly sounds to be female to me. Also, Go-On Gold's sister Go-On Silver has a male partner Jetoras. So I believe if the girl has a boy, then the boy should have a girl partner. I do not know why everyone is so against Triptor being female. On the show, they haven't referred to Triptor as either male nor female. But Bomper has been referred to as male.

Posted by Lavender Ranger at 7:29 PM No comments: