Speculations: What could not adapting Sentai mean for Power Rangers

UPDATED 7/20/20
Last week Illuminerdi brought out news that Hasbro would no longer be adapting Super Sentai footage from Toei, the majority of the fandom does not believe this unless Hasbro makes an 'official' announcement. As the news broke, there has been confusion. Some fans thinking Hasbro no longer being connected to Toei meant they would lose copyright to existing Power Rangers characters. As Jason Bischoff, who used to work for Saban Brands and briefly Hasbro told me via tweet once that if it is already Power Rangers, there is no copyright problem. Toei can't take that away. Hasbro cutting ties with Toei means Dino Fury will be the last season (for now at least) adapting from Toei's Super Sentai.

So by the chart above, Dino Fury will be the last season in 2022. This is my projection as presently the Nick contract ends in 2021. But since they have been doing 2 years each season, it makes sense they would extend it for a year. What is to come for 2023 is unknown. Michael Louie, former webmaster of Power Rangers Now, said in a recent interview with Illuminerdi that is unlikely Hasbro will be making their own footage for Power Rangers as that would be expensive and Toei was doing a good job, so why do it? Michael made it clear Hasbro's choice was not because of Toei's quality. I think it was a money issue and in Hasbro's vision, they don't see the current formula working. I personally see that Hasbro doesn't see that Sentai is part of the DNA of Power Rangers. Many fans have said that the live-action show is part of it and without it, it wouldn't feel like Power Rangers.
Taking a Break
Insiders believe Hasbro is putting all their money in the upcoming movie and toys will continue. They want Power Rangers to be as popular as in 1993 and want to tell more stories of Mighty Morphin team because that is what the public is familiar with. Franchises without a constant show are not unheard of. Transformers, My Little Pony, Ninja Turtles, Marvel and DC franchises have survived without having a constant TV show or movie on. Hasbro probably sees this as a break. As for MMPR, people are more familiar with Jason, Kimberly and Tommy just like mainstream people are more familiar with Bumblebee, Optimus Prime, and Megatron for Transformers. As Super Sentai has never taken a break and even with Covid, it doesn't look like it will end.
What Hasbro sees producing the live-action series
This is just guessing, I don't know the actual details. I don't even know the ratings but word is the ratings are stable but lower than before. Power Rangers the series has not been as popular as it was in the 90's. Some seasons have been popular (good ratings or good sales) but not at the same level. Power Rangers Zeo had 50 episodes in 1996 while Power Rangers Wild Force had 40 in 2002. When Disney started producing Power Rangers, episode counts started at 38 episodes with Ninja Storm in 2003 and then lowered to 32 by RPM in 2009. In 2011 once they joined Nickelodeon, the episode count was down to 20 per year with some specials, and each 'theme' was expanded to 2 years. Let's look at facts:
1995 - Zeo - 50 episodes
2002 - Wild Force - 40 episodes
2003 - Ninja Storm - 38 episodes
2009 - RPM - 32 episodes
2011 - Samurai - 22 episodes
2020 - Beast Morphers - 22 episodes
Episode counts have stayed steady for 9 years on Nickelodeon but it is few and many fans have complained of the few episode count. But it looks like all we can get. There simply is no other network. Cartoon Network is now simply in house cartoons that range to 13 minutes in length. The other choice is a streaming service but no children's franchise is surviving on a streaming service exclusively. The most popular TV series for kids would be Spongebob and that is on Nickelodeon. And Nickelodeon hasn't been kind to Power Rangers as much as the Disney networks were, probably because of the violence and it is not the same anymore on television. The restrictions on television are tighter nowadays. I don't mind the violence but it has always been an issue with Power Rangers. I am not saying it is the ONLY reason but could be a contributing factor. 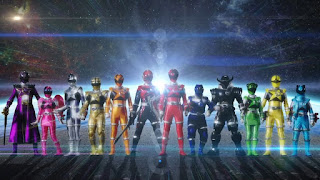 The Future
I foresee if Power Rangers does take a break from Super Sentai, it doesn't mean they can't go back. Let's face facts, Power Rangers has had a lot of different owners--Saban, Disney, Saban (again) and Hasbro. And whoever owns them later or even Hasbro, can always go back to adapting Sentai. Even if Sentai ends, they have plenty of series to choose from (Toqger, Zyuoher, Kyuranger, Lupinranger vs Patranger, and Kiramager). While I am not happy with the live-action factor of Power Rangers taking a break or ending, I do find all of this interesting. I don't see the Power Rangers franchise ending. I would really like to see how an animated series would play out. Without Sentai, Power Rangers could really stretch its wings and come out of the 'make my monster grow' formula and go on its own pace. It would be interesting to see rangers, weapons, zords, and villains designed by Hasbro and a story going by its own pace and not relying on footage. Now for those who don't believe this happening, I am not going to force anyone to see it my way or whatever, everyone is free to their opinion. The truth will come out soon one day. But let me tell you this, I am oddly positive moving forward. What am I basing this on? 27 years of consistency. Ironic that on the 30th anniversary, there won't be a series based on new sentai. But who knows, maybe there will be because of this whole Covid thing. Hasbro could extend the Nick contract for 3 years until 2024.
Posted by Lavender Ranger at 10:09 PM 2 comments: