Why didn't VR Troopers have another season? 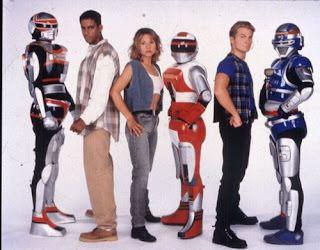 VR Troopers is Haim Saban's second series, the one after Mighty Morphin Power Rangers. It ran from 1994 to 1996. It was syndicated, unlike other Saban series that ran on Fox Kids. VR Troopers was adapted from two different series Metalder and Speilban. They used up most of the footage by using one episode from each series for one episode, bascially two episodes. For Season 2, they replaced the Metalder footage with an older series Shaider, so Ryan got a new 'VR suit.' It had ended with season two and had no proper series finale. Most fans liked it because it was a bit more serious than MMPR and because it was syndicated, it was much more violent, very little was edited. Now this hasn't been discussed much but the number one reason it ended was because they had no more footage. There was plenty other Metal Heroes series they could take from. Initally only Metalder was going to be used and it was to be called Cybertron and star Jason David Frank. But because of the Transformers copyright and that Tommy was popular, it was all scrapped. 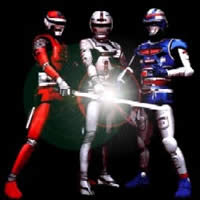 Gavan (center) and Sharivan (left) were series before Shaider. I think they could have used Sharivan for Ryan and Jaspion (below) for JB. Maybe they didn't want to keep changing costumes for the same reason they didn't for Power Rangers. The first three seasons, they didn't change suits because believed kids wouldn't like the change. Most fans say they gave up by Zeo because of the costume change. But I think changing was wise because many combinations were different and hard to explain and the Japanese series only last one year. Same with Metal Heroes. Saban tried again with Metal Heroes in the form of Beetleborgs. B-Fighter only had one spin-off, so they only had 2 years. There was talk of using their own footage for Bettleborgs but that never happened. 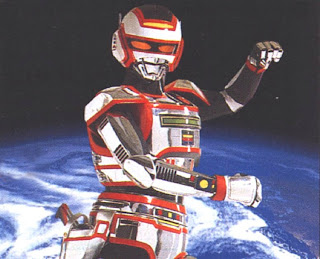 Jaspion really looks like the costume of Speilban and it was the series between Shaider and Metalder. I think they could have used it for JB. But I guess they didn't continue because they had no other suit or footage to replace for Kaitlin. Metal Heroes had no other female in a series other than SolBrain, Blue Swat and B-Fighter. And those series (SolBrain and Blue Swat) didn't have costumes that matched with the ones used in VR Troopers. So I guess the major reason they didn't continue was because they had no more female hero footage. As for the series finale, they really should have had one. There was the reunion between Ryan Steele and his father; but they didn't destroy the main villain of Grimlord.

UPDATED NOVEMBER 1, 2008
Yeah that was 'Battle Grid' space which they wanted to have an equivalent to the rangers fighting putties and also, to have all three troopers together since all footage was derived from two different shows. So they used the Red Ranger's helmets and re-painted them. Above there they are. They did the amazing skill of make the Red Ranger helmet look feminine (right).