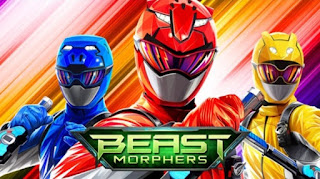 Summary:
Coral Harbor City. Clean X energy will be opened by the mayor and it will supposedly save the planet. The mayor will pull it. Meanwhile, a blonde guy Blaze is training karate with a guy (mayor's son Devon) with headphones and attitude. They challenge each other. They get aggressive with the karate. Ravi and Roxy try to get him to stop. The Mayor--Devon's son comes in and tells him to leave. Blaze says its not over. Devon was supposed to be at a cleaning carper job interview. Mayor is heading for Grid Battlegrid. Devon takes picture of ID. Mayor thinks it is a mistake and is not for it. Devon leavcs the limo as well. The security guard (with Bulk and Skull music) are funny with the mayor. Devon sneaks in with his dad''s ID. One of the laundry ladies Zoey introduces herself--she was cut and Mayor thinks she will go far. Commander Shaw arrives and takes Mayor to the lab. She shows them Morph-X, an energy that was turned into liquid by Nate, a kid genius. 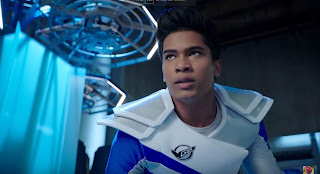 Mayor says it is a mistake. Talking about different monsters who want to rule the universe and now that the grid has been 'wrapped around with a ribbon' an evil can go for it. Devon disguises himself. Now opening Sequence and commercial. Someone tells Devon to go to the lab. He sees three people on beds. Nate and the commander show the Mayor that the grid will mutate with animals the DNA into Power Rangers. Devon notices a purple energy enter a tube. Nate teleports a blade. The Ranger identities have to be secret. The mayor leaves. A snake scares Devon and his identity is revealed. Ravi, Blaze, and Roxy wake up. He tells them of the virus. He is taken to detention. Roxy and Ravi may be romantically involved, Ravi says they can't be together, Rangers can't date Rangers. Roxy seems heartbroken. The three cadets go under the device to change their DNA. Mayor does a speech. They activate the Morph-X. Alarm blares. Evox, the virus says the grid will be his. 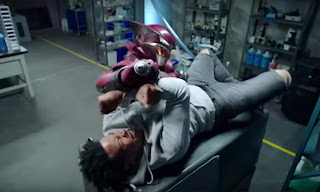 Commander says to abort. Devon escapes. Zoey doesn't run away but runs to the lab. The two goofy security bump intot hings.  Blaze glows and an evil Blaze arises from the real Blaze body. Blaze put sthe mask on. Devon and Zoey get together. Roxy is corrupted. They are avatars. Ravi is about to join them when Devons tops it. The two villains shoot Devon and get run over by Zoey. Ravi is mad about Roxy. Devon and Ravi double team Blaze. Zoey fights Roxy. Roxy wraps the three and put them under the DNA device. Nate shoots it and frees them. He morphs them. Ravi says they aren't Blaze and Roxy. The Rangers fight the two. Ravi tells Nate to teleport the two far away. They successfully do so. They take off their helmets. The real Roxy and Blaze are put under stasis. The three introduce each other. Nate says the virus duplicate the, the evil twins, they are linked. As long as their avatars are awake, they are asleep. Apparently the commander is Ravi's mom. Commander says they are the Power Rangers. Zoey says she is proud to take their place. Devon says he's in. 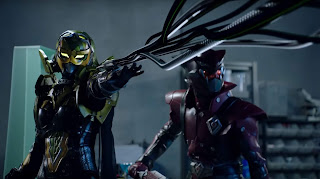 Review:
Greta start and feel. The Rangers have parents that are involved, Ravi has a personal stake on Roxy. They some callbacks. I like that is slow moving and the first episode effectively introduced the whole cast and the characters clearly. Devon is the hyper kid wanting a bigger challenge, Zoey is the Type A go-getter that doesn't give up and Ravi is the follow-the-rules guy. I asked my grandnephew what he thought, he said boring. My grandniece says she is disappointed there is no pink. There is Go-Busters elements like the giant energy thingy, the lab and base and there are MMPR elements such as the youth center, karate and Bulk and Skull music. 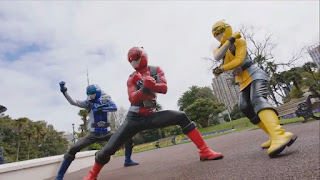 Some people have called this a "Jungle Fury"-"RPM" hybrid. The "DNA" part reminds me of Operation Overdrive, the beasts remind me of Jungle Fury and the whole base reminds me of SPD and RPM. The whole episode feels like a Disney episode with vibrant characters, lots of good story points and pacing. It is not all perfect, the whole karate fight between Blaze and Devon seemed awkward and strange motivations on both parts. The romantic link between Ravi and Roxy didn't feel genuine. Also, the Bulk and Skull music? So obvious. Good points go to the Mayor, Commander and Nate. Nate is a capable character and charming and not annoying like other kid geniuses (Cubert from Futurama and Wesley Crusher from Star Trek). Commander is capable, caring and stern all together. Good start.
Posted by Lavender Ranger at 8:49 AM No comments: 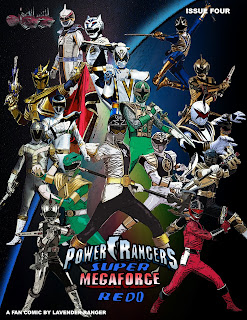 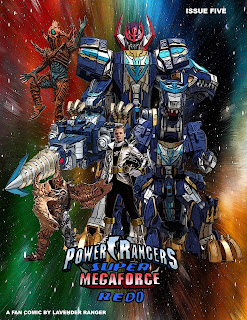 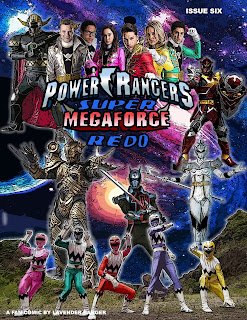