I bought Superhuman Samurai Syber Squad Volume 1 & 2 DVDs from Miller Creek. I have not seen the whole series since 1994. For those who do not know, this series was not produced by Saban. Tsuburaya Productions who created Ultraman had a 38 episode series called Gridman in Japan. The footage was used for this series along with help from DiC, Playmates and Ultracom. Superhuman Samurai Syber Squad had 53 episodes, some had continuity and the majority were stand-alone episodes. It had an announcer that sounded like SNL's Don Pardo or it was Don Pardo uncredited. It not only had one but two Christmas episodes.

Both Gridman and SSSS dealt with teens watching a hero on the computer fight viruses online. In both series, a teenager could become Servo/Gridman. In SSSS, his friends entered the syberworld through the vehicles and in Gridman, they observed him. Kahn Digifer/Kilokahn both had control over a sullen rich kid who deisgned monsters for him. Syd was the tech/brains, she was like Billy of MMPR. Amp was the weird one, like the Screech of Saved by the Bell. Tanker was the jock/drummer who was like Slater of Saved by the Bell. Tanker liked Syd and Syd kind of harbored feelings for him as well. Amp's actor (Troy Slaten) left for unknown reasons and off-screen they said he was an alien and went home and he was replaced by Lucky. "Hasta La Virus Baby" is a clip-show reminiscing on Amp and introduces Lucky (Rembrandt Sabelis). "Little Ditch, Big Glitch" was his last episode.

DiC created two Tokusatsu programs, Superhuman Samurai Syber Squad and Tattooed Teenage Alien Fighters from Beverly Hills (Episode One available as an extra in the Volume Two First DVD) at the same time. Major difference is that SSSS used Gridman footage. While TTAFBH suffered bad acting and bad writing and bad special effects, SSSS had good writing and good acting. Tim Curry played the voice of Kilokahn and Matthew Lawrence (Hot Chick, Ms. Doubtfire, Boy Meets World) played Sam/Servo. It had its arc where Sam wanted Jennifer and finally got her and they were dating. It was an on/off relationship but mostly on. Sam was often teased for his height. His little sister Elizabeth (the brilliant Kath Soucie who was Phil and Lil in Rugrats) is an off-screen character that we hear from a laundry shoot.

In the episode "Kilokahn Is Coming to Town" is the second Christmas episode and shakes things up. It is the 38th episode and seems to use footage from the last episode of Gridman, 38th episode. Kilokahn is out to destroy Malcolm and tracked down the Team Samurai. He 'zaps' the team except for Sam and reveals Malcolm has been helping him so he goes to Malcolm and recruits him and even Jen comes down to his basement and she finds out the truth about Sam. Since there was only 38 Gridman episodes, they use limited footage and plotlines to not use footage like with "Hide and Servo." Also it looks like since Matthew Lawrence was 14 at the time, they limited his appearances as child labor laws. 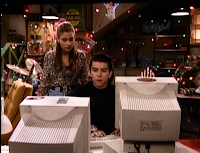 In "Kilokahn Is Coming to Town," Kilokahn looks strange, like his clothes are too big for him. It could be possible this is his only American version. Could be they had the suit but had an American actor play him and the suit didn't fit well. Also, Sam gives Malcolm his digitzer. In Tokusatsu magazines it was revealed Malcolm's Japanese counterpart Takeshi Todo was going to become Gridman Sigma in a sequel series. It is hinted in this episode as Sam gives him his digitizer. Also worth mentioning is "Ashes to Ashes Disk to Disk," Jennifer is tired of being treated like a "sex object." Malcolm is also alludes to a sexual advance to her. 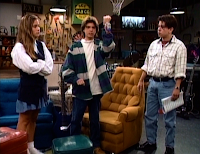 "What a Rad Universe" is one of my favorites, where Sam enters another dimension where Yolanda or Yoli is one helping Kilokahn. Tanker is the Rainman, Syd is clueless as Kelly Bundy, Lucky is a sophisticate snub, Malcolm is as nice as Sam and Yoli and Jennifer is the brains. Ultimately Malcolm and Jennifer help Sam become Servo and fight a virus to return home. Funny part of the episode is Tanker says, "Oh right, like there is an alternative universe where we all Japanese." And yes, Tank, there is. What I do like about the show is that the Team Samurai got along so well. The Tattooed Teenagers did not. At least they had Malcolm to be grumpy and gloomy. 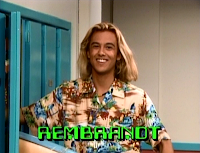 Does this show age well? No. Syd has a "Blossom" hat. They talk about topical stuff back then like New Kids on the Block. It also has timeless stuff like Anthrax, Bill Gates, etc. It has computers that are now 'old school' but deals with the digital world which can now be more fun with iPads, Smart Phones and the like. Both SSSS and TTAFBH had limited sets. TTAFBH had 5 sets: Drew's pool/backyard, Nimbar's command center, a high school hallway, coffee house and bad guy headquarters. SSSS had less with 4: Sam's basement, high school cafeteria, high school hallway, and Malcolm's bedroom but it wasn't as noticeable as TTAFBH.

Worth the watch: YES
Series Grade: B-, not gold but a fun series
Posted by Lavender Ranger at 11:15 PM 1 comment: