Representation of Colors in Super Sentai (2018) 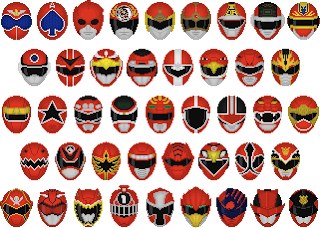 Red
Red usually represents courage, sacrifice, aggression, love, negativity, passion, socialism, heat, fire, beauty, leadership, injury, danger, blood, and conservatism. The As for the Sentai Reds 2011-2018, there is a mix bag of bubbly and serious and stubborn. Alata is positive and Marvelous is firey, aggressive and stubborn. Hiromu is serious and blunt. Daigo is positive and bubbly. Right is positive and bubbly. Takaharu is serious. Yamato is positive and Lucky is bubbly and stubborn. Tsurugi is prideful, arrogant and intelligent. While Kairi and Keiichiro are both serious, Keiichiro being hot-blooded and Kairi being impulsive. Alata, Daigo, Right, Yamato and Lucky have been positive characters, always looking at the bright side. Marvelous, Hiromu, Tsurugi, and Takaharu have been serious but with a sense of humor. 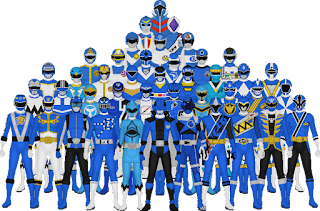 Blue
Blue can represent ice, water, sky, sadness, winter, royalty, cold, calm, magic, and truth. In the English language, blue often represents the human emotion of sadness. Most of the 2000's blues are calm. The 2010's ones are no exception. Hyde is serious, calm, and sometimes sad. Joe is the serious one but can laugh at a joke. Ryuji is reasonable and cool-headed, often referred to as the big brother. Nobuharu is reliable, clumsy, shy and funny, the opposite of calmness, coldness and sadness. Haru is cautious and punctual. Yakumo is actually quick tempered but also has a cool demeanor. Sela doesn't like to lose and doesn't want to show her weakness. She is associated with water as she is a shark. Garu is short-tempered and impulsive. Tooma is the calm one. So Yakumo and Garu are short tempered while the other ones are cool and collected except for Nobuharu who is the opposite. Yakumo and Nobuharu are used for comic relief. 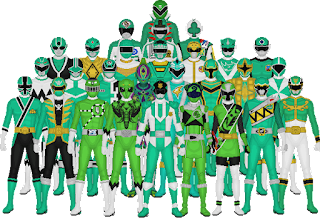 Green
Green usually represents nature, growth, hope, youth, sickness, health, spring, money, and envy. In many folklores and literature, green has traditionally been used to symbolize nature and its embodied attributes, namely those of life, fertility, and rebirth. Green Rangers usually represent nature, growth, hope, youth, health, and envy. Most Green Rangers are the comic relief, stubborn one, or the decent one. Hanto, Sen, and Don are a few that represent comic relief. Most of the time when a Green Ranger has a elemental power, it is to do with nature, Magiranger had Nature and Shinkenger had to do with Wood/Forest. Don was nervous, smart and comic relief. Souji is cool and calm. Hikari is calm but opposes Right at times. Tusk is smart, sensitive and kind. Hammie is sarcastic, hyperactive and self-motivated. Sakuya is laid-back. So Sakuya, Don and Hikari are lax at times, Souji and Tusk are serious when it comes to fighting. Hammie is unique not only that she is female but she is not comedic relief in a slapstick sort of way. Most of them do represent youth. Only Tusk represents nature. Magi (GoseiGreen) and Luna (Midoninger) were only temporary rangers. Luna was bubbly and there was not much to Magi other than he died and was Hyde's friend. 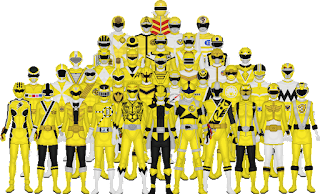 Yellow
Yellow represent sunshine, warmth, fun, happiness, warning, friendship, caution, intelligence, cowardice, love, hope, optimism, imagination, curiosity, surprise and thrill. Most Yellow Rangers are the happy-go-lucky ones. They have represented almost all the properties previously mentioned. There are some Yellow Rangers that are the opposite of happiness and optimism. Moune is strict and perfectionist, Luka is a badass and cocky about it, Yoko is impulsive and stuck up. Mio is a tomboy, Nagi is friendly, Leo is strong but has a bad temper, Spada is the put-together father figure, and Umika is carefree and playful. Nagi and Spada represent friendship. Umika and Mio represent happiness. Leo and Luka represents thrill and curiosity. Moune and Yoko represent precociousness. 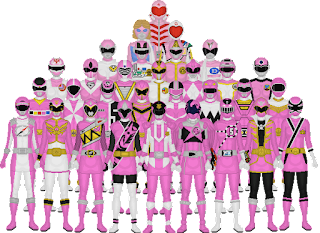 Pink
Pink has represented girls, love, health, fairies, beauty, cuteness, and glamor. And all the Pink Rangers have in some way represented all those aspects (fairies only to a few). The majority of the Pink Rangers in Sentai had to represent feminine side, be super girly. Eri is bubbly and super cute, representing love, beauty and cuteness. Ahim De Famille is regal and polite, but not above fighting. Amy is free spirited. Kagura tells tall tales and her imagination is huge. Kasumi is a girl sharp-tongued genius. Raptor is a cute dreamer. Tsukasa is calm and collected and has a plush toy collection. Eri, Ahim, Kagura and Raptor represent the ultra feminine stereotype. While Tsukasa and Amy are feminine tomboys if that makes sense. They are masculine/tomboy but not too much, with a touch of feminity. Kasumi is somewhere in the middle. 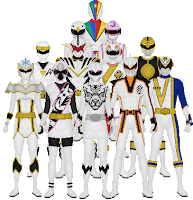 White
Most of the time, White represents bravery, purity, nobility, softness, emptiness, knowledge, snow, heaven, peace, life, clean, air, sunlight, surrender, clouds, frost, angels, weakness, protagonist, winter, and innocence. White Rangers have represented bravery, purity, nobility, softness, knowledge, snow, peace, life, clean, winter, and innocence since more than half have been female and half have been male. The one that represented snow and winter is Miyuki, the one that has been complete opposite is Abare Killer. Fuuka is optimistic and jolly. Amu is cute, feminine and also helpful and brave. I don't know Lucky also is counted as a White warrior but he also represents bravery, angel and light. 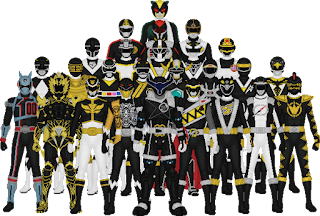 Black
Black has represented darkness, secrecy, power, mystery, death, fear, antagonist, strong, chaos, evil, bad luck crime, elegance, anarchy, rebellion, non-conformity, individuality, and solidarity. Black Rangers have represented darkness, power, mystery, strength, rebellion, non-conformity, individuality, and solidarity. I don't know if DekaMaster and ZyuohtheWorld are counted as black but in some sources they are. The one in between DynaBlack and GoggleBlack is Magne Warrior from Bioman by the way. Agri of Goseiger is tough and willing to make sacrifices. He represents strength, Ian is a Lothario and a bad boy with a past. He can represent rebellion and non-conformity. Champ represents strength, mystery, and solidarity as a noble robot who wanted to find his creator's killer. ZyuOhtheWorld is a sweet kid that was brought into darkness, mystery and power. 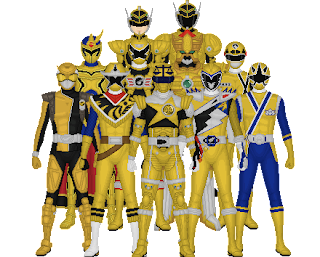 Gold
A cousin to yellow (orange and brown as well BTW) is gold. While green may be the color of U.S. money gold is the color of riches and extravagance. Because gold is a precious metal, the color gold is associated with wealth and prosperity. It can also represent praise, commendation, valuable, positive, superior, outstanding, excellence, and favored person. Most Gold Rangers (save for Marigold and BeetBuster) as Sixth Rangers and are considered the best and powerful. BeetBuster/Masato is odd and playful, Utsusemimaru is seemingly cold and calm but also caring and comforting, Kinji is a naive fanboy who can hold his own. Balance is shady, energetic, and flashy. Patren X hasn't debuted as of yet, so I can't write anything yet. Kinji and Balance represent positive and favored person. The others represent value, excellence and superior. 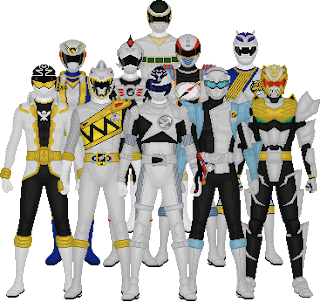 Silver
Silver, especially a shiny, metallic silver, is cool like gray but livelier, more playful. Silver can be sleek and modern or impart a feeling of ornate riches. Silver often symbolizes riches, just as gold does. Silver can be glamorous and distinguished. While women are seen as old, gray-haired men are seen as graceful aging. The silver-tongued is considered witty, eloquent speaker. Most Silver Rangers (except for Stag J. Beetle/StagBuster) are sixth rangers and are considered the most powerful. Patren X hasn't debuted as of yet, so I can't write anything yet. Only two Silvers have been female and two have been robots. GoseiKnight is mysterious and serious, Gai is the ultimate positive fanboy, Torin is a mentor with a sense of humor, Daigo's dad was mysterious and strong, Naga has no emotion but wants to have it and J is egoist and wants to be cool. So most of them are lively and playful, except for GoseiKnight.

(Art by lunastar2497)
Violet
Purple is associated with royalty and nobility (stemming from classical antiquity when Tyrian Purple was only affordable to the elites). A mysterious color, purple is associated with both nobility and spirituality. Since there has only been one Violet/Purple warrior in both franchises, there is not much to go on. Gou/Geki Violet was hot-headed, serious and creative, he cared a lot about his little brother. Wolzard who was dark and mysterious. The original KyoryuViolet was a little flashy but also caring and strong. Yayoi is smart and reserved and has a crush on Daigo. Shou Ronpo is Ryu Commander, is like an old man who had a habit of missing the point, is goofy and doers have a serious side. While Shou Ronpo represents nobility, the Conductor/Toq7gou does not but he is mysterious at times.

Orange
Orange represents desire, fire, engineering, determination, compassion, endurance, and optimism. Fire is repeated from Red and Optimism is repeated from Yellow. The first orange warrior in Sentai is BattleCossack, he was good at science. DekaSwan was also good at science (engineering) but also compassionate and optimistic. Akira is no-nonsense and carefree but somewhat suicidal by his catchphrase. Bud/ZyuohBird is stalwart and mysterious. Stinger is quiet, serious and short-tempered. All of them can stand for compassion and endurance and determination. Akira and Stinger can stand for desire. 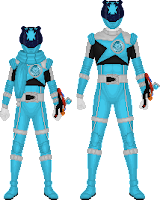 Cyan
Cyan is a restful, calming color that symbolizes relaxation, especially that shade of cyan known as bright turquoise which can be the color of the water in lagoons in tropical countries. Cyan not only counts KyoryuCyan and Ooguma Skyblue but also Blue Swan, Blue Ninja, Hurricane Blue, MagiBlue and ZyuOh Shark. Ramirez is brave and caring. Kotaro is optimistic and impulsive. Most of them are cool and relaxed.

Grey
Gray is a cool, neutral, and balanced color. The color gray is an emotionless, moody color that is typically associated with meanings of dull, dirty, and dingy, as well as formal, conservative, and sophisticated. The color gray is a timeless and practical color that is often associated with loss or depression. Tessai represents emotionless and calmness. Shinya has to find courage. Naga/KyoryuSilver also is emotionless.