Power Rangers: Former Cast - who is a mamma and papa? 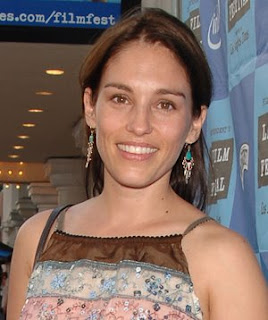 Recently, it has been revealed that Amy Jo Johnson is pregnant and engaged to Oliver Giner. She is 37, she is the upcoming CTV and CBS "Flashpoint" in July. So I wanted to check which other Power Rangers alumni have kids.
Surprisingly, not a lot.

Jason David Frank (Tommy) - He married Shawna in 1994 and had two boys (Jacob and Hunter Sebastian) and had a little girl named Sky, then divorced in 2001 and married Tammie in 2003 and has daughter Jenna Rae and stepdaughter Shayla. He is 34.

Nakia Burrise (Tanya/Yellow Zeo and Turbo Ranger) apparently according to Actors in Spandex has one child. She is 34.

Tracy Lynn Cruz (Ashley, Yellow Turbo and Space Ranger) is married to Javier Leon with three sons (according to Wikipedia). She is 32.

Justin Nimmo (Zhane, Silver Ranger) married Michelle McCaskill on May 22, 1999. They have two children. He is 34.

Jason Faunt (Wes, Red Time Force Ranger) has one child with his wife Stephanie who he married in September 6, 2002. He is 34.

If you know of any other I missed, let me know.

In Episode 19 of Go-Onger, Jum-bowhale, the ninth Engine was quickly introduced, not formerly, at the end of the episode. The Sixth and Seventh rangers had been revealed in episode 17, I think it is rather quick from the 9th mecha to already appear. But of course, this one will help make up the robot for the two new Rangers--Seiku-Oh. It seems to be a pattern to have mecha built of three mecha in this series. The main three make EngineOh and the black and green ranger's Engine combine with the sixth Engine to make GunBirOh. And, of course the combination of all nine Engines will also be in the movie, premiering August 9th. 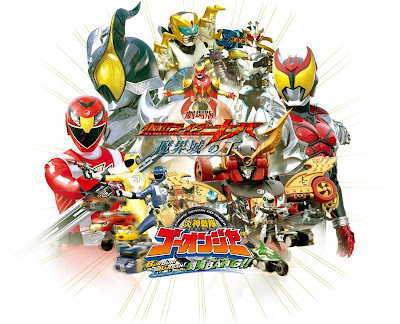 I guess these characters were revealed quick enough so they could appear in the movie. Because last year in Gekiranger, the fourth and fifth rangers were not revealed until after the movie premiered August 4. GekiViolet premiered in August 19 and the last Ranger GekiChopper premiered on September 9. Also, Gekiranger only had 13 mecha. Go-Onger appears to will have more, probably 15. Of course 3 are re-paints, the 'evil' mecha above--DaiShogun, which will appear in the movie as well. Of course, this whole thing about what and who appeared in which episode can't be determined, as Gekiranger is evidence--nothing goes in accordance, characters and mech can be introduced at any time. But there is such a thing as timing and character development, so having 7 rangers by episode 17 compared to having only 5 (and 2 evil sort-of rangers) by episode 28 is pretty smart.

Posted by Lavender Ranger at 11:21 PM No comments: