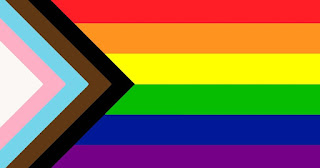 I was eleven when Power Rangers first aired in 1993, and I came out as bisexual when I was 14. I am now 39 and openly gay. I never figured we would have an openly gay character, let alone a Ranger on Power Rangers, because of the moral guardians and whatnot. Most of the time, the Power Rangers show is meant to be geared towards children ages 3-11. Sometimes, that changes. In Space to Time Force were suppose to be for children 7 to 11, while Wild Force seemed to be for Children 3-6. Anyway, I digress. The following is a SPOILER (for Dino Fury), so skip this if you do not want to know. 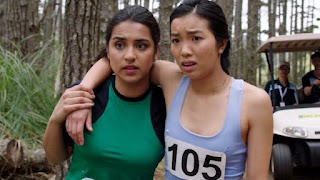 In the episode "Matchmaker," which aired in France but might air on Nickelodeon on October 9th. Javi thinks Izzy has a crush on a boy but finds it out it is actually on a fellow athlete Fern (who previously appeared in episode "Winning Attitude"). Some fans previously guessed Izzy was supposed to be gay. Some of those fans even saw her removing the skirt as evidence of her being gay. I didn't think so because it could have all just been a coincidence and also I didn't think Power Rangers would dare to do this. So I am happy to say I was wrong, I didn't expect it to be so. Having watched the episode, Izzy doesn't say "I am gay" but she holds hands with Fern and they walk away to go to a restaurant. Amelia and the others cheer them on so it is pretty obvious. The guy Javi thought Izzy likes signals him to see the two women. What would have not been counted would have been them just holding hands and leaving without the cheering and the moment between the guy and Javi. 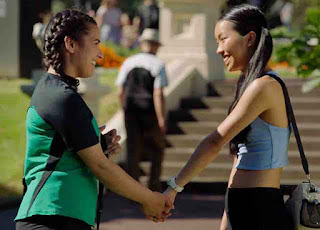 Now, let's talk about queer coding. Queer coding is the subtextual coding of a character in media as queer. Though such a character's sexual identity may not be explicitly confirmed within their respective work, a character might be coded as queer through the use of traits and stereotypes recognizable to the audience. Now, many mistakes queer baiting and shipping with Queer coding. Queer coding more falls under the writer's and producer's intent. Many hopeful fans mistake just regular relationships for an actual romantic connection and intent between characters with their own hopes. For example, they might want Stiles and Derek together in Teen Wolf and mistake moments for actual coding and swear the two characters are gay. It might have been unintentional. Queerbaiting is a marketing technique for fiction and entertainment in which creators hint at, but then do not actually depict, same-sex romance or other LGBT representation.

Queer bating is not an active thing in some shows but fans still accuse shows of being so. Now, I don't see Izzy as queer baiting, I see this as a legitimate attempt of telling stories of characters who previously have been ignored. Now let's talk about the other LGBT characters in Power Rangers that also happen to be female Power Rangers. Some fans don't consider these as canon as they are not in the main continuity of the show. We can discuss canonicity some other time. 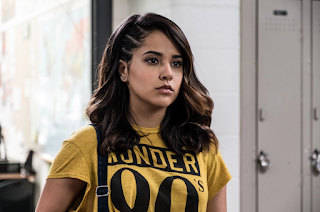 Trini (Power Rangers 2017)
In the 2017 Lionsgate movie, Trini (Becky G) is alluded to be gay, she doesn't actively say it in the movie. Zack asks her if she has girlfriend problems and she gives him a look. She talks about how her family is 'normal' and not will understand. I did like this inclusion but would have liked them to go further, that she would at least have a girlfriend on screen. I am not asking for a kiss or hand-holding, but at least a scene. 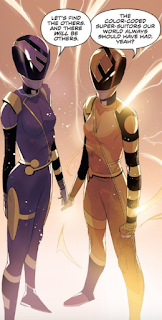 Ellarien and Remi (Power Rangers comic)
In the arc "Beyond the Grid" of the Power Rangers comic, the Rangers (assorted team) meet Ellarien the Solar Ranger and her friend Remi. At first, it is seen they were close friends but it was specifically said until the end of the arc that they were in a romantic relationship.
The following are not canon relationships and as of 2021, Producers have not said if the characters were meant to be gay or not. Only the actors have expressed their intent. 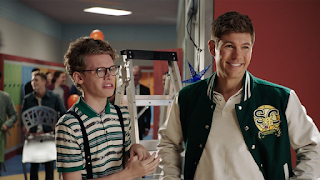 Victor and Monty (Ninja Steel)
Victor Vincent is the Big Man on Campus (or at least wants to be) in Power Rangers Ninja Steel. Monty (Caleb Bendit) is a hanger-on, he is devoted to Victor. They are both bumbling characters and are meant to be comic relief. Not once, Victor expresses any romantic interest in Monty nor are they in any romantic scenes. Caleb Bendit has stated that he played Monty as being in love with Victor and 'gay.' As of 2021, producers have not said if they meant the character of Monty to be gay. Even if Monty was gay, Victor was not probably meant to be and hence, they were not in a gay relationship. Caleb did say producers and some fans did not like the take he took. I don't see a problem with seeing Monty as canon gay, because it was just innocent worship. 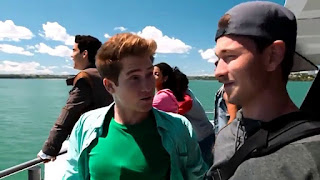 Riley and Chase (Dino Charge)
Riley Griffin (Michael Taber) was the Green Ranger in Dino Charge and Chase was the Black Ranger. They were friends. They sometimes had conflicts. Chase had an interest in women and had a girlfriend on the show. Riley didn't have any female romantic interests. Michael Taber years later admitted he played Riley as gay. I don't know how I feel about these straight actors claiming they played characters as gay. Now some fans ship these two characters and consider them canon gay. That I know of, the producers didn't intend them to be gay. I don't think they were actively trying to Queer Code or Queer Bait. We can debate until the cows come home but the only confirmation we have is Michael with his intent. But also keep in mind, he did not like his experience and has retired from acting. I am not saying to disregard his statement but to take it with a grain of salt.