I covered this before but I thought it would be nice to web searchers who only see one of my posts to have one simple post on this topic. For those who don't know this or never noticed it as a kid, some Yellow Rangers had no skirts like the Pink Rangers. 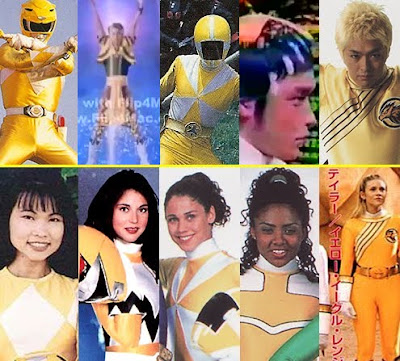 In five Super Sentai series that were adapted into Power Rangers, there was just one female in a five-ranger team, so a yellow male ranger became female. So that is the reason why some Yellow Rangers had no skirt. Contrary to popular belief, most Yellow Rangers in Japan are not female but male. Funny Enough, this gender switch was only done during the Saban era and never for Disney. It could be said that Disney was really lucky that Toei didn't have a team with just one female. In the case of Ninja Storm, Dino Thunder and Jungle Fury---the teams started out with 3, so Disney never had reason to gender switch a Ranger. And every other team had two females in the team. 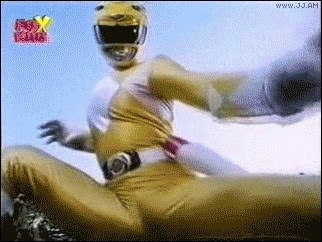 Another funny thing, back when in MMPR, there was special footage made by Toei for Saban that had the Blue Ranger being smart, Pink and Green's relationship, but Yellow was not made female. In one episode using that footage--"Bloom of Doom," you can clearly see the Yellow Ranger's crotch. Also, many of the stunt people for the female Yellow Rangers were male. 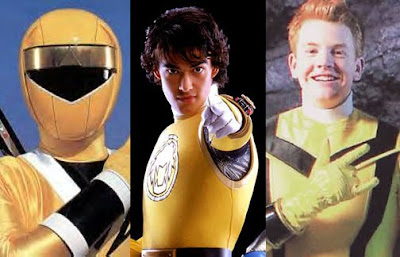 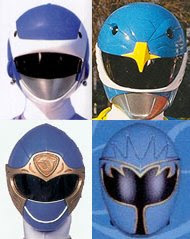 And how many female Blue Rangers? Four in Super Sentai and two in Power Rangers, but you already knew that. This for people unfamiliar with current Power Rangers.

I can't help but notice that you never mention the Hanarangers when talking about ranger colors. When you talked about different shades of green, you didn't mention HanaGreen(made up name, I know) being an olive-ish. Whenever you mention GekiViolet, you never mention that there was HanaPurple. Etc,etc.

Thank you for this post! I am rewatching Season 2 of MMPR and I noticed the Yellow Ranger didn't have a skirt and thought that was weird since the Pink Ranger did.