Do we really need a male PInk Ranger? 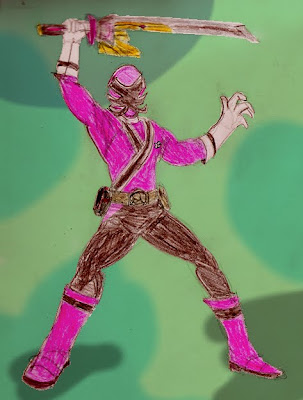 I know I have a poll up asking if you would want a male Pink Ranger or a female with colors never done before, but I have been thinking, do we really need a male Pink Ranger? Females haven't been allowed to be in more colors then the men have. Pink is the only color the girls have over the men. Females haven't been let to be Black, Green, Violet, Crimson, or Navy. I wouldn't mind it either way unless they even the playing field. Above is my rendition of Shinken Pink as a guy. It would be cool to have a male Pink Ranger, because I hate pink being discriminated against. But what I hate the most is discriminating females, so I rather girls get more colors before. It is silly to say one color belongs to one gender, because it is just a color. Pink has existed for years and only until after World War II, pink was assigned to girls. I covered most of this in my Kamen Rider Decade post about him being pink.
Related Topics: Super Sentai Gender Bias: Feminine Colors | Kamen Rider Decade: Pink, Magenta or Red? | It's a Girl! The REAL Shinken Red
Posted by Lavender Ranger at 9:17 PM

Not really. The designated Pink color is, will & always be a primary color for a female.

agreed. pink will always be female. cant see a male wearing that!

Pink is too girly for boys.

There are male superheroes who wear pink already, and people love them. We don't NEED a male Pink Ranger, but it wouldn't kill anyone to have one. Personally, I think it would be cool. Gender discrimination is BS.

I'd rather first see a female Green and/or Red before seeing a male pink.

Female green all the way... Not male pink though...