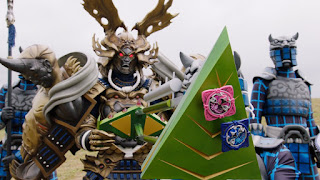 Cosmo Royale recaps the events of the last episode. The Rangers go to Galavanax who wants the Power Stars. The Rangers morph and fight the Bashers. Galavanax gets the magnet and takes the stars of the Rangers and dimorph them. He kidnaps the Rangers except for Brody who escapes. Red fries the magnet. Mick arrives and helps, they leave with the Ninja Cycle. 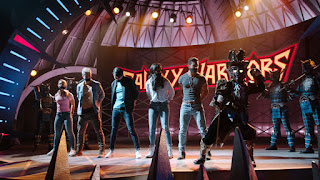 The kidnapped Rangers are taken aboard the ship. Monty and Victor are working on a new bigger magnet. Odius wants to destroy Galavanax which the two are okay with but not with destroying the Rangers. So they decide to dress as Kudobots. Brody wants to fight back. Redbot tells them that the asteroid is close to the Earth. Mick says they can melt down the Ninja Cycle star to make a new Astro Zord Star. Galavanax shows he put the Ninja Stars on his belt. The others arrive but as prisioners. Brody makes a decision like his dad did and uses his sword to destroy his Power Star. Out of the smoke come out the Prism with three Red Ranger Power Stars which the Rangers wonder about. 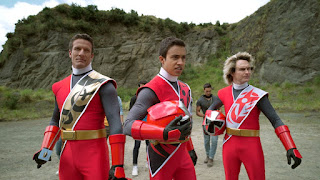 The two Red Rangers come out to fight and reveal to be Brody and Mick. The Rangers escaped the Kudobots. Brody says the Prism protected him. Galavanax is about to attack nwhen the third Red Ranger takes him down and his belt. The Rangers take their stars back. The third Red Ranger reveals to be Brody and Levi's dad. He says he was injured but the prism healed him and kept him safe. The others morph. The new Red Rangers show their moves. Galavanax drinks the melted Ninja Steel and has more power. The dad fights Galavanax. He is pushed back. Cosmo makes Galavanax big. 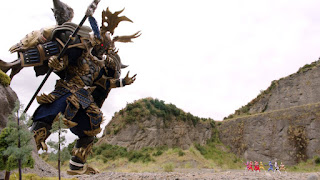 Victor and Monty hide out as Kudobots. Monty feels sick because of the alien food he ate. They stumble across the stage and are revealed to be humans as Monty passes gas. Galavanax is defeated by the eight Rangers flip around like Ninja Stars. Odius tries her betrayal but the space ship gets flipped into space for its trouble. The Rangers celebrate. Later, Levi tells his dad how the villains made an android with his memories. Mick makes everyone sad by leaving the planet to go back to the Lion Galaxy. At the end we see Odius' hand coming out of the rubble. 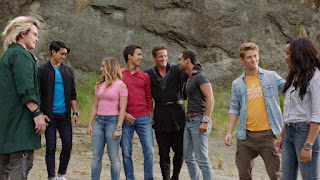 Review:
That was a cool Zordless Zord battle with Galavanax. Everything got wrapped up but we know that is not the end.

Posted by Lavender Ranger at 6:18 PM No comments: 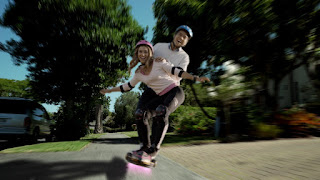 Summary:
Preston and Sarah crash on her hoverboard and Preston help her think of the idea of using it for her Shop Class project. At home, we find out her mom is just like her, an inventor who Sarah finds distracting. She tells her she doesn't need her mother's help. Her mother grabs her battery. A new force field monster has been selected to fight the Rangers. Preston and Victor has a magnet that can attract metal and it ends up attracting almost all the scrap metal in the junkyard. Victor and Monty are stuck within in. 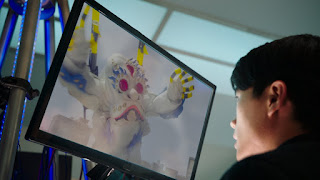 Sarah's mom comes in with a supercharger for her battery. She says it will power it 10 times more. Sarah says its too much. She inserts the battery and the hoverboard flies off. Sarah berates her mom, causing her mom to be sad. In the hideout, some Rangers train and Calvin thinks Sarah was too harsh on Sarah. Sarah says her mom is over interfering. The Rangers go after a monster. They morph. Red dons his Lion Fire Armor. Gold and Blue fight the monster Force Fear. Red blasts him and kicks him back. Red throws Blue and Gold at him and they bounce off the forcefield. The others reunite. The monster will blow him up but they retreat. Madame Odius comes and he wants to be giant so his forcefield is bigger. 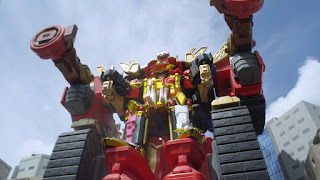 The Prism tells them to combine the zords. They only have one piece of Ninja Steel to make a new star. Mick has been scanning for Ninja Steel through the universe. Mick throws the star in the prism and it doesn't work. Redbot gets mad at Sarah, she says she was just trying to help and realizes what she did to her mom. She realizes what she did to her mom, realizing the super charger might help. The villains make Force Fear giant. Sarah throws the star in the prism. Lion Fire Mechazored is formed to fight. The other two megazords arrive. Mick gets the new star and throws it at them. 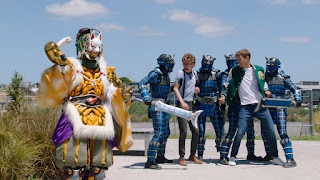 Ninja Ultrazord is combined. They break the Forcefield. Red gives Pink his sword and strike the monster on his own, They do the Ninja Ultrazord Blast. The monster is destroyed. Sarah apologizes to her mom at home. She wants her to help her with her board. Helping is not a bad thing. Her mom promises to ask her first before she fixes something. Later, Monty and Victor are disappointed with their machine. Victor pumps it to max and points it at the school. An astroid is found to have ninja steel. All the Ninja Stars fly out of the base and hit Victor's machine. This freaks out Mick and Redbot. The villains see this. Galvanax arrives at the school and kidnap Victor and Monty. Galvanax is mad the Power Stars aren't there. 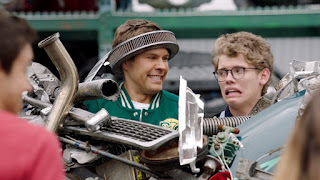 Review:
Some good points. The mom's accent wasn't too bad. Amazing to see another parent, last season we did get some parents but it is rare in Power Rangers. We only met Tyler and Shelby's parents and Kendall's grandmother. Here we have met Brody's dad, Preston's dad and Sarah's mom.
Posted by Lavender Ranger at 5:05 PM No comments: