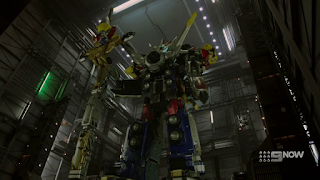 Summary:
Cyber Gate is almost created. Mayor confronts the commander about Devon being a Ranger. He meets Ravi and realizes he is a Ranger. Zoey explains about Evox's plan. She tells him Devon was trying to stop him. Mayor asks how he can help. Commander says no. Ben and Betty begin the test and open the dimension portal and something wrong happens. Betty is sucked in and becomes flexible. She returns to normal, now she has stretchy powers now. Ravi wants to go in with a beacon inside. Commander says no. Mayor Daniels grabs the beacon inside and enters the portal. Everyone is shocked. Steel wants to shock them. Zoey says they need a bigger zord. Nate says he has the Ultrazord ready. Scrozzle sees Morph-X enters Evox's new body. Blaze wants him to hurry. Devon is left alone and a brick is dropped next to a Tronic. The tronic turns and is hit in the head by Mayor Daniels. He tells Devon is quiet and he takes him away. Tronics realize Devon is gone. 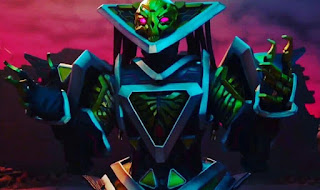 Ultrazord is ready to be made and the Rangers dissemble the zords. The other zords are combined and Ultrazord is formed. The Ultrazord is teleported away. Scrozzle detects the,. Blaze asks for an army of Gigadrones. Gigadrones are assembled. The Gigadrones blast at the Ultrazord. Devon and Mayor hide in brick walls. They catch up. Devon tells him that it is against the rules to tell him. He apologizes for giving him a hard time and he couldn't be more wrong, that he is a hero.The Ultrazord does the Ultra strike and destroy a,ll the Gigadrones. Evox is formed. He teleports in front of the Ultrazord. 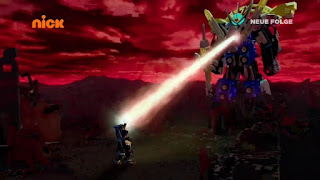 Evox blasts at them and the zords come apart. Devon and Mayor reunite with the Rangers and Beast Bots. The zord are damaged. Evox confronts them. Mayor hides for safety. Devon morphs. Evox blasts them and they de-morph. Evox glows and grows. Evox heads off. Steel says he might want to merge with the Morphin Grid. They make a plan. Devon and Cruise use the Racer Zord while the others stop Scrozzle. Devon morphs again. Evox enters the transporter. Blaze hurry up Scrozzle. Scrozzle sends Tronics. Red and Cruise enter the Racer Zord and get to the Morph-X Tower. They find a new Gigadrone inside the tower. Blaze is piloting it. The Megazord fights the Gigadrone. The Rangers fight Tronics. Nate, Smash, Mayor and Jax goes after Scrozzle. 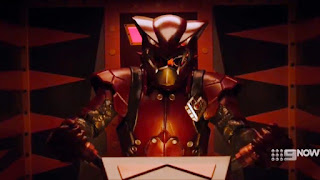 Nate blasts at Scrozzle. Scrozzle teleports away with some gear. Nate tries stopping the teleportation. Red does Hyper STrike and takes down the Gigadrone and Blaze at once. Nate tries to reversing the teleportation. The tower becomes unstable/ The Rangers reunite and they go back to the cybergate portal entry. The Megazord becomes Racer mode and an explosion occurs that wipes out Evox. The cyber gate opens and the Rangers run in. Mayor looks longingly at the portal for Devon. Morph-X comes towards the mayor and the portal is full of green fog. Devon and Cruise come out of the mist. The portal closes. Betty is still flexible. Mayor says he is proud of Devon. Blaze awakens and a technician finds him. 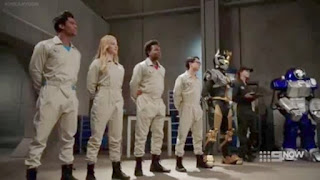 A week later, the Rangers get a medal of valor. Mayor was re-elected. Ben and Betty also get something. Betty is in a bubble suit. They get medals and their dad cries. Betty goes flying everywhere. She is then fine. Steel wants a selfie. Mayor's hand glows purple.

Review:
Devon gets the acknowledgement that many kids want from their parents. I am not sure if the Megazord footage was all new but some of it was pretty good. It is a good episode. I wish this was the season two ending because it is hard to top, that is what happened with the Ninja Steel finale. The Ninja Steel finale was better than the Super Ninja Steel finale. The Dino Charge finale at least let the door open for Dino Supercharge. This doesn't seem like a mid-season finale even though the next season won't have 'super' in it. Also, there is no indication what place Roxy and Blaze will have now that they have been saved.
Posted by Lavender Ranger at 1:30 PM No comments: 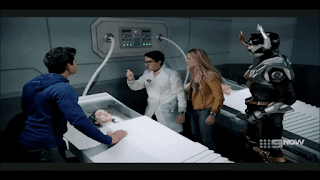 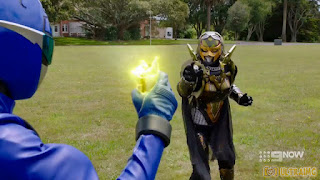 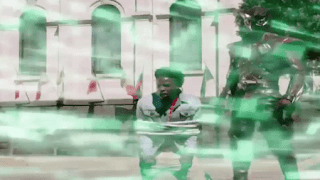 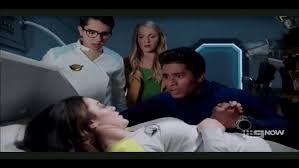 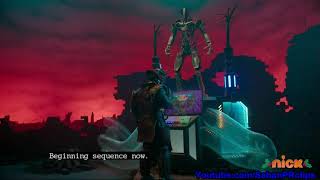