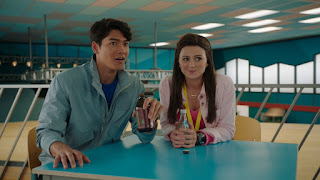 Drakarok and Mucus enter Area 62 and find Void Knight making Boomtower, it needs the Nephrite Orb. Ollie and Amelia take Zayto to Amelia's job for a reporter job. They meet Javi, who wants the job to get a Keytar. Javi is sent to research the Nephrite Orb at a museum. Zayto is sent to interview athlete Izzy Garcia. Zayto reveals to Izzy that he is a knight and a reporter. Izzy says no interviews. Zayto gives Izzy a tip in javelin throw which she does and it succeeds. She calls him "Mr. Knight" and agrees to the interview. Izzy says her stepdad is a park warden--Amelia identifies as the guy who restricts them from going into Dinohenge. Javi interviews a professor in the museum when Boomtower, Fungus, and Drakarok arrive. People run and Javi hides. 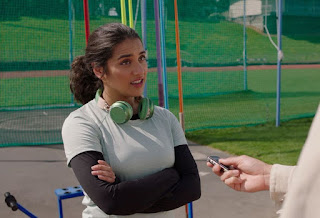 Javi calls the Power Rangers hotline. Ollie gets a call from Zolon while Zyato and Amelia interview Izzy. They leave Izzy and Ollie tells them about the museum. Doomtower has the orb. The park warden arrives, saying to put the orb down. He is knocked out by Doomtower. The three Rangers arrive and morph. Javi watches from a safe area and spots the warden. The Rangers use the Gravi, Sprint, and Sheild Dino Keys. Ollie blocks Boomtower and AMelia goes fast. They're knockdown. Zayto ties Doomtower and Draknok with his gravi ball and chain. Javi takes the warden's truck with the Nephrite. Mucus follows the truck. J-Borg arrives at the museum. The Ranger teleports away with the warden. J-Borg reads the teleprompter and juice is drop on the keyboard and J-Borg reads the wrong words. 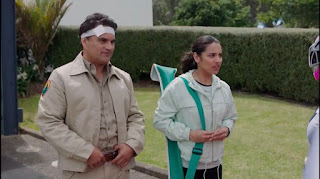 Izzy greats her father. She tells the Rangers she is a fan. Warden says his son is Javi and took the truck. Izzy says Javi goes to a secret spot to practice music. Javi stops at the park and Mucus teleports away. Doomtower and Drakarok advance on Javi. Izzy and the Rangers arrive at where Javi and the baddies are. Javi throws the Nephrite Orb and Izzy and he finds the Dino Keys. They become Green and Black Rangers and help fight with the Rangers. Boomtower leaves. Drakarok grows. The zords are deployed. All five in the cockpit and the Megazord is formed. They fight Drakarok. Zayto uses his saber and they destroy the monster. The zords go back to normal and the Rangers pose. Zayto gets the Sporix. Teh give unmorphed in the base. They are meet. Zayto says humans like Zords. They meet Solon who offers a snack. Izzy confirms Zayto is actually a night. Javi laments the orb is destoryed. Izzy says there are plenty of jobs. Meanwhile Jane and J0Borg do a report about cattle ranchers. J-Borg is electrecuted. The Rnagers enter Buzzblast. Jane meets with them, they apologize. Jane says Javi protecting the orb takes guts and she hires Javi. She says Zayto didn't get it. Zayto and Javi shake hands. Jane wants him to find the first hamburger. 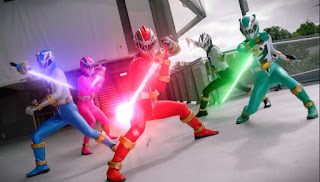 Loving Izzy, she has great one liners and attitude. With Javi, there is plenty room to grow. There is more to know about him. I thought he would be more cynical but that seems to be Izzy. I just realized Ravi and Javi rhyme.