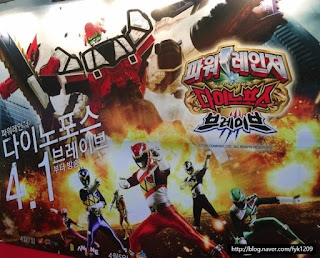 At first I didn't know what to make of this South Korean production but after seeing some footage and the opening sequence, I am impressed. South Korea production company Daewon Animation will produce a 12-episode sequel series to Kyoryuger as Kyoryuger was dubbed as Power Rangers Dino Force. This is the first time South Korea makes their own production. They are not only cast new actors, have new villain suits, shooting new actor scenes, new fight scenes, but also zord battles. What didn't impressed me was re-colored suits and zords. But the opening sequence impressed me at the production value, looking like Sentai. I am not sure if Toei is in charge of the zord battle footage. 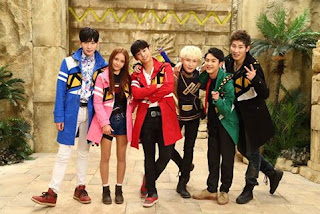 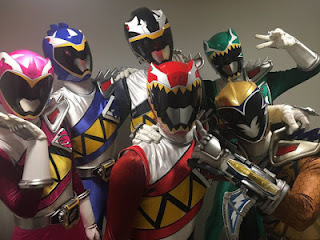 The Stegosaurus now belongs to Black, called Stegotoup with a chainsaw. The Triceratops is now Blue and called Forekkera. The raptor is now pink and called Raptorax. Parasazier is the Parasaurus and green now. Even thought their helmets have not changed. 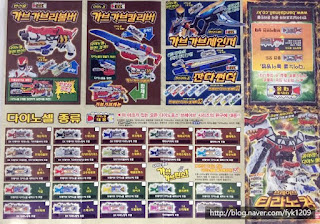 
LAVENDER RANGER'S OPINIONS ARE HIS OWN 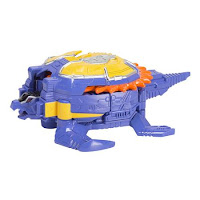 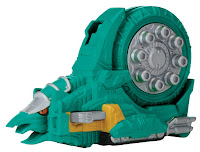 It's my own personal opinion but it would've been cool if they did new suits based on the other Zyudenchi (Dino Chargers) like Bandai America did with the zords. For Dino Charge and Dino Supercharge, Bandai America made new molds: Ammonite Zord and Archelon Zord. They also recolored a Raptor as a Oviraptor. Now the reason they probably didn't do this was to cut costs and just re-color existing suits and zords. Also, the Dino Charge franchise is owned by Saban. Daewon probably only licensed Toei and Bandai Japan. But it is curious that Daewon uses the 'Power Rangers' title. But Saban does not exclusively own the name 'Power Rangers' for certain regions. That is why it is labeled as 'Saban's Power Rangers.' Bandai and Toei has Super Sentai toy sales mixed with Power Rangers as 'Power Rangers' for international records. So do we consider this Sentai or Power Rangers? Now some people wonder why Saban hasn't made their own zord footage and it is because it is very expensive. They would have to commission it again like they did for Zyu 2. Saban hasn't done their own Zord footage since Power Rangers Lightspeed Rescue. Disney did their own footage for SPD. Anyway I digress. 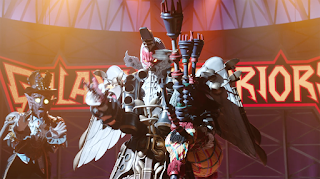 Episode Summary:
Victor is dreaming to impress the ladies with dancing but last year he tripped into the dance bowl. Redbot reads a fairy tale about going to a dance. Hayley thinks Redbot doesn't understand friendship. Redbot wants Hayley to go with him to the school dance which she refuses, thinks is a joke. She leaves and he says it wasn't a joke. Back at the Galaxy Warriors, Scottish-accented Bagpipes hypnotizes Cosmo and the grunts into dancing. Hayley helps set up the dance. Victor calsl for music, he dances and trips into the punch bowl dropping on Hayley and Brody. Hayley and Brody clean up, Brody asks Cody where Redbot is, Cody barks, Hayley says she doesn't know dog. 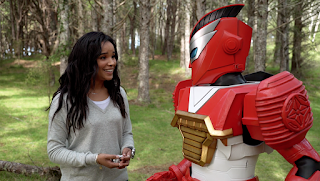 Hayley learns Redbot is advanced when she tells Brody what happened between them, making Brody believe she hurt his feelings. She denies it. Brody is about to go look for him when Hayley and Cody go to look for Redbot. Cody tracks the footprints and they bump into Bagpipes. He plays music and she almost gives him her power star when Redbot kicks him. Hayley is thankful. Redbot is not affected by the music. She morphs into the White Ranger and fights the monster. Redbot saves her once again. Cody throws dirt on the monster. Redbot and Hayley fly away.  They crash and Hayley de-morphs and Cody finds her. 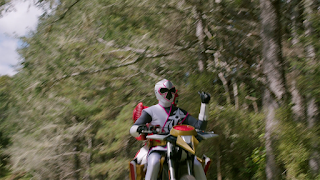 Redbot malfunctions. Her Ninjacom is broken, she goes it to Cody and sends him to the others. Redbot reboots and Hayley is happy. He apologizes for crashing, she asks how she can thank him for saving her. She figures out he does have feelings. Redbot says Brody says he is special. She apologizes for rejecting him. She says he is human, being able to laugh, cry and love makes you human. She calls the Megamorph Cycle and morphs and they race off. Cody takes the Rangers to the monster where Hayley and Redbot see the smoke. Bagpipes is with Ripcon. Bagpipe hypnotizes the four to give him the Power Stars. Hayley blasts the baddies. Redbot hides and the four re out of the spell. Hayley de-morphs due to Ripcon's attack. 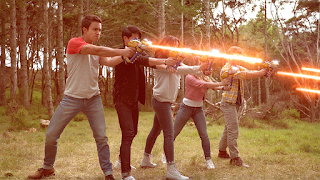 They struggle on the ground. Cody comes and snags the bagpipes. The Rangers blast the bagpipes away. The Rangers morph. The Rangers fight the monster while Red fights Ripcon. Bagpipes runs off and the Rangers go after him. Ripcon pins Red, until he tricks him with a scarecrow. Ripcon makes Re dfalla agin. The monster fights the Rangers at the beach. Red does an attack on Ripcon and kicks him down. Ripcon retreats. Red goes to the others. Blue and Pink do their arrow attack and the monsters make him bigger. The Rangers regroup and call the zords. Ninja Steel Megazord is formed and they don Master Mode. They fight the monster but then call the Rumble Tusk Zord to morph. They combine noses and break his off. 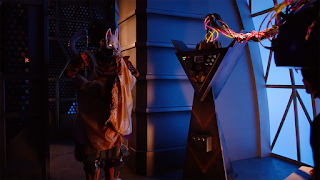 They break his fan. They do the final attack and destroy Bagpipes the monster. Back at the spaceship, Galavanex is made at Ripcon and kills a grunt. He tells him he is next. Madame Odius laughs and in her secret room, she has a man tied to a strange device. She holds the gold Ninja Star. She says she is transferring something. She says they have no idea what she is capable of. At the school dance, Nico.. I mean Calvin dances well with Sarah. Meanwhile, Victor waits for Monty in his "Dances with the Stars" outfit. He brings him automatic dancing shoes. Vitor dances well until the shoes malfunction and he crashes in the hallway. calvin asks Hayley to dance, she says there is something she has to do. She goes to the hideout and asks Redbot to dance. The others come and they have a private party. 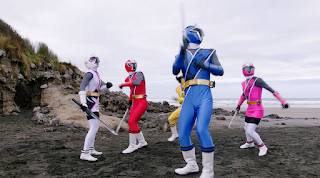 Episode Review:
I used to work in television production and they always say don't work with kids and animals. I have seen good dog 'actors', but Cody seems to be a fickle dog to work with. I do love the speech Hayley gave Redbot about being human, it was good writing and felt heartfelt. The only writing flaw is that Hayley didn't have to dance with Redbot at the same time as the dance, she could've done it at any time. I guess it is the thought that counts. Honestly the only exciting thing in this episode is the semi-reveal of the Gold Ranger.
Posted by Lavender Ranger at 3:37 PM No comments: