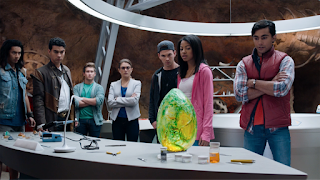 Episode Summary:
Tyler, Riley and Shelby found a weird green egg. At Sledge's ship, Sledge and Poisandra will keep the Dark Energem from Snide when they marry. Snide finds this out. Heckyl is at the cafe and tells the Rangers that the eggs are Greenzillas but planted all over the world. He wants to eat his last meal, They want his help. Shelby tells them that he is the good half of Heckyl and Snide. He doesn't agree. At the base, the Rangers see an egg hatching and destroy it. The other eggs hatch al over the world. They call their five megazords and go to the different cities. Meanwhile, Heckyl enjoys his last day on Earth by skydiving, water rafting, rollercoasters, etc, 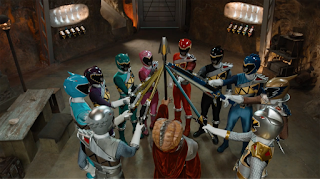 Zenowing in Titano in China, Graphite & Aqua in Plesio in Hawaii, Pink & Blue in Dno Charge in New York, Gold, Green & Black in Pterazord in England and Red in Tokyo, Japan in the SpinoCharge Megazord and Purple in the Base! So screwed up Purple doesn't go in her own zord. Red split back into three zords: Pachy, Ankylo and Spino and beat up the Greenzilla and then went back together. He destroys the monster in Tokyo. The Sledge-Poisandra wedding occurs in the ship. Sledge is having jitters. a Rat appears and the aliens freak out. Poisandra falls unto the cake. Fury tells him that an egg is missing and Tokyo one was destroyed. He sends Snide but he wants Wrench sent. Snide takes the Dark Energem. 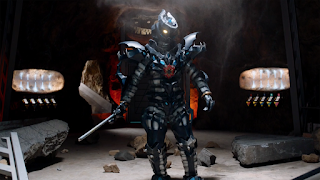 The Rangers strongling wth their Greenzillas. Pterazord does the final attack but the monster survives. Heckyl watches the news, that world leaders call for a state of emergency. People running around. Heckyl sees a little girl without her mom and he leads her to her mom. The woman thanks him and kisses his cheek. He touches it and remembers Shelby telling him thank and that he changed. He looks up and sees Snide's pod and runs towards it. Zenowing is running out of power. Shelby and Koda ask for help and Ankylozord comes to help and they replace Stego. They destroy the Greenzilla in New York. Spinozord helps the Pterazord in English and they make Spino Charge Megazord. Koda, Ivan and RIley join Tyler in the cockpit. Pterazord also blasts the monster and it is destroyed. Pachyzord comes to hep the Plesio Zord and Aqua and Graphite destroy the Greenzilla. The Rangers go to Zenwoing and throw their Dino Chargers in and helps TitanoZord. 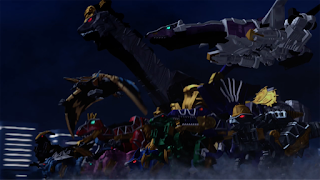 Snide enters the museum. He tries destroying the floor. Kendall is happy about the destroyed Greenzillas but the floor collapses on her and Keeper. Keeper knocks Kendall out of the way and he gets hit. Snide says now he knows the base is under the museum (he did know this but forgot because of a potion). Purple morphs and fights Snide. Purple is knocked down. Keeper comes to him. Snide wants them to touch the Dark Energem. Heckyl comes to the rescue. Heckyl and Purple go out to fight and Pink and Blue join in. Aqua and Graphite and Silver arrive. Red, Green, Black and Gold are in the Ultrazord. Snide wants the Manga Beam, Sledge says no. Heckyl and the Rnagers point their weapons at him. Ultrazord calls the Titano Canon. Red calls the Dino Saber and they hit Snide. Snide blows up. 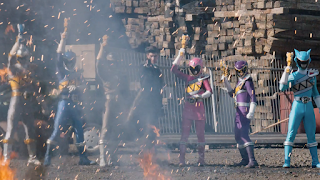 Poisandra and Sledge marry until they find their is no Dark Energem. Snide sends Fury to get it. The Rangers look through the rubble and find Dark Energem. Tyler says it is not even scratched. Heckyl says Shelby was right and he wants to help. Tyler says he is one of them. Fury is in the base and they all run. 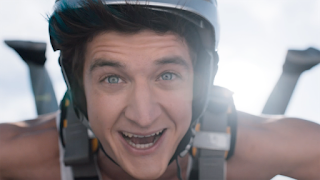 Review:
Good episode, I like the international feel, mostly from the source material Kyoryuger. I don't like that Purple was not involved but I guess someone had to be with Keeper when Snide attacked. Watching Spinozord combine with other zords was cool.
Posted by Lavender Ranger at 12:30 PM