Missed it yesterday because of Rangerstop Con in Orlando, FL. 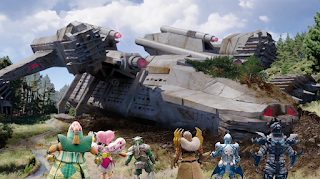 Sledge is upset about his ship being a wreck. Poisandra slaps him in the face for not telling her he survived. He found something special in the cells, a glowing egg. He let go Heckyl. He took the eggs and planted them throughout the Earth. He wanted to know if Poisandra was okay. Poisey was miserable, he says the world wasn't fun and we see pictures in the opposite enjoying Hawaii, Japan and China. James Navarro watches this. Snide gives Sledge the Dark Energem. 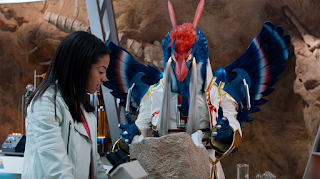 Zenowing says he created the zords with geodes as eggs. Shelby can't believe it. He says it works like the Energem crystal beds. He tells her he will teach her how to creat eit. At the cafe, Koda wins a pie eating contest. Kendall doesn't liek this, telling them James found the dark energem location. Back at the base, Keeper says the dark energem has to be destroyed. James tells them about Sledge. Chase says to hit them with all the megazords. Shelby says there is no way to be sure. She says to surprise attack on the ship and crush the energem. They agree and say no megazords. Back on the ship, Sledge gives Poisandra flowers and she crushes them, saying she wants to get married. 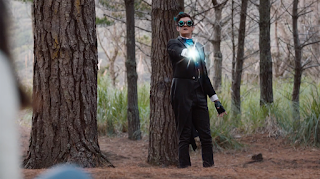 He says as soon as the ship flies. She leaves. Snide and Fury tell him that the Rangers are coming. Fury goes get a monster called Badussa. The Rangers are found out by Viviks in the forest. Badussa turns Zenowing, Koda and Kendall, Ivan and Riley into statues. Viviks throw Shelby away. Chase and Tyler are turn into stone. James, Philip and Shelby escape and hide behind a tree. 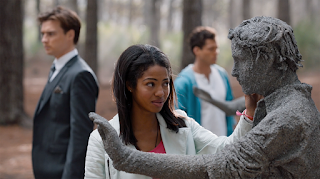 Heckyl arrives to rescue, saying he knows how to lose a world. Badussa escapes. Heckyl leaves. Shelby is left shocked. Shelby touches Tyler's statue and tears up. They go back to the base and put the statues there. Keeper says their zords won't work without the Rangers (since when?). Their zords have no cockpits. Keeper tells Shelby to create a zord, she has no confidence. They give her pep talks. Shelby looks through dino bones and chooses the Spinosaurus (not choosing one dino because it looks like a crocodile--hmm). Sledge hurries up Wrench in putting the dark energem in a weapon. 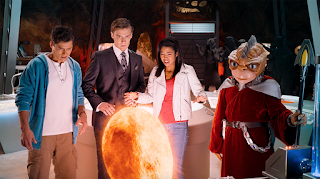 Shelby puts in metal, bones and a crystal in the eggs and with Keeper's soul power. The egg burns up and goes down in the ground. Keeper tells them to follow them. Shelby takes out the Spino dino charger. Poisandra decorates the ship. Keeper and the others stop back in the forest. Philip walks towards a campsite and Heckyl appears behind them. Heckyl says Snide is after him. Heckyl tells them they split up. Shelby says he saved them. He says he wanted to destroy Badussa, he says Arcanon destroyed his planet. Keeper is surprised he survived the end of Sentai 6. Heckyl wants to restore the planet. Badusa arrives and Shelby smashes his amulet. Philip, James and Shelby morph and Pink, Graphite, Aqua and Keeper fight Badussa. She is about to destroy the amulet, Heckyl wants to work together. They both blast it and the Rangers are restored. 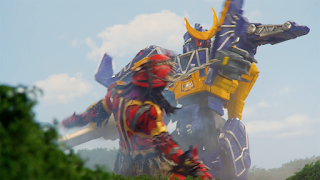 Shelby sends them her coordinates and she thanks Heckyl. Heckyl tells her to get off the planet. Badussa knocks the three away and calls the mangabeam. Philip asks how they can destroy him with no Megazord. Keeper's staff glows. He says the Spinozord is alive, it emerges from the ground and hits Badussa. James says good job. The Rangers call Ankylozord and Pachyzord. Shelby throws the Spino charger and make Spino Charge Megazord, the four appear in the cockpit. Keeper helps fight. He has a red base with Spino as his symbol. Badussa is destroyed and shrinks down. The Rangers arrive. They leave Keeper. 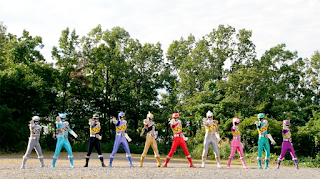 The Rangers reunite. Badussa arrives with Vivicks and the blue guards. The others morph. The ten Rangers fight the villains. Badussa fights Red. Red goes Super. Shelby gives him the Spino Charger and he gets Stego spino Formation. Badussa throws an attack and he throws it back with the Spino Boomerang. The ten Rangers do a final dino strike and Badussa explodes behind them. Sledge's ship is up and flies away. Kendall figures he powered it with the Dark ENergem. 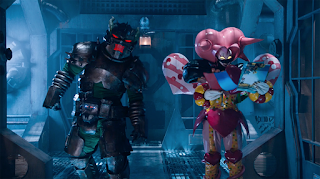 Poisandra wants to honeymoon in Hawaii, China and New York. Sledge says it won't exist when he is done, maybe the Milky Way. She leaves. Snide and Wrench arrive with the Dark Energem, Sledge wants to see the destruction. Zenowing offers Shelby to be an appertance, she declines. Shelby tells Tyler she did it for the ones she loved to fix up her messed up plan. Tyler tells her it doesn't matter, she did good. Shelby tells them that Heckyl said to get off planet. Ivan says that Sledge's plan is so huge, they have to get off planet. 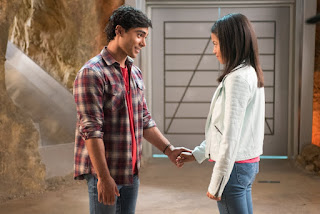 Review:
We got Spino Charge Megazord and Deathryuger's monster form but no Talon Ranger. Way to get our hopes up again. (First was Super Megaforce) I do like that Shelby created the zord as this works on her character since she wasn't even allowed to touch the equipment in the beginning of the first season. I was disappointed at the statue quality, the Madison statue from Mystic Force was better and that wasn't so hot. Why I care? Production values. But TV, there is not much budget to make realistic statues of the actors. Also more rules that make no sense like the zords won't work without the Rangers, the Pterazord worked without Ivan and the other zords work plenty of time without James, Philip and others. Heck, Plesiozord worked without Albert.

It's a shame th direction and writing is taking a back seat and what's crazy is we are getting close to the season finale and they are just fooling around with this hack and slash plot. I hope Ninja Steel can stay more focused. I love Dino Charge but yet again we see this bull crap laziness that the Neo Saban Era has been trying to either hide or let run loose in these seasons.

Main body Zords can be controlled by anyone, but limbs rarely matter.

Didn't the price of cement and whatever stuff to make sculpture raised recently?

It's actually rare to see a Power Ranger villain to have fun. Now if only Marvel movie learn how to do that.