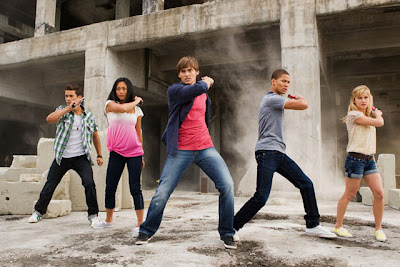 Saturday, October 1 at 12 p.m./11 Central - Power Rangers Samurai Finale Part I: “Broken Dreams”
Episode Description: When the Gold and Pink Ranger fall under the spell of a dream-inducing Nighlok, the other Rangers must enter the Dream World to save them.

Saturday, October 22 at 12 p.m./11 Central- Power Rangers Origins Special Part II
Episode Description: As  the  teens  continue  their  transition  into  their  new  secret  lives  as  Samurai  Rangers,   Yellow Samurai Ranger Emily  reveals  a  surprising  truth  about  herself.  Meanwhile, after  a  Nighlok attacks,  the  Rangers  combine  their   Zords to  create  the powerful  Samurai  Megazord to  protect the planet from the monster.

So we still have a month until DaiGouyo appears.

finally octoroo gets hit in the face with an ugly stick

haha, well...currently I wait for the torrent file...for today episode...