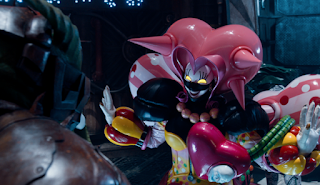 Summary:
The Viviks have hazmat suits on to carry some explosive liquids. Poisandra is leaving the ship with luggage. Sledge has one energem and Poisandra isn't waiting for all ten. He promises that if he gets one more, they will get married. Sledge puts the purple one in a special gun. A mobile machine called the GetBot finds Tyler's red gem in their base to test it out. 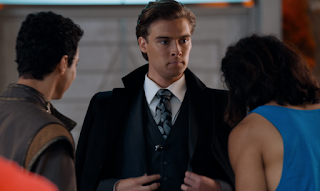 Prince Phillip walks in and says he is ready. Kendall detects transport pods, the Rangers race off. Kendall and the morphed Rangers arrive at the coordinates and see the pods. Ivan and Kendall go to place the GetBot. Sledge freezes the six Rangers, Ivan leaves Kendall and she plaes the Get Bot in the pod. Sledge tries taking the red energem but Keeper blasts him off. 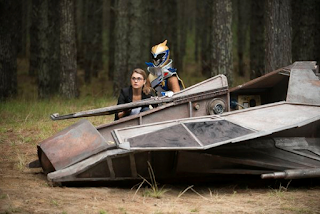 Sledge takes Keeper hostage in the pod and takes Tyler's gem. Kendall fights a Vivik and climbs in the pod and the pods fly off into the ship. Tyler fights off Sledge and frees the others. Pterazord flies  by and the Rangers jump into it. Sledge flies away. Tyler says Keeper is powerless without a pod. Kendall tells them that she went after Keeper. A giant monster arrives. Tyler says he will go with Shelby to the Plesiozord to space. Dino Charge Megazord is formed and the others pilot it. Tyler and Shelby take the Plesiozord. Tyler says how dangerous it is will not stop him. 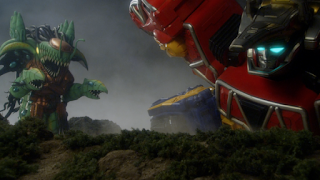 Kendall arrives in the ship and Getbot seeks the energem. Kendall spots the prisoners and gets in a Hazmat suit. Wrench inadvertently gives Kendall the purple Energem and she takes it. Sledge comes in and wants a laser cannon with the Red Energem. Poisandra walks in and berates Sledge for lying. He says he is so close. Meanwhile, the Rangers try the Ptera formation. Plesiozord docks with the Sledge ship. Wrench makes the laser cannon. The security alert comes off and Kendall turns it off. Wrench have the Viviks de-mask her and sends her to the trash room. The five boy Rangers are about to use the Stego Saber but go down. Getbot seeks the Energem as Kendall and Keeper are taken to the incinerator. Kendall grabs the explosive liquid. Sledge comes in and gloats. 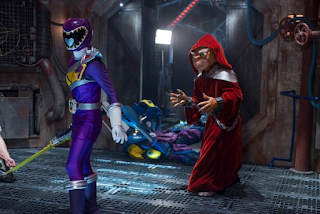 Kendall drops the liquid and makes a hole in the ground. Keeper and Kendall jump in and fave Blueheads. Kendall fights the monsters. The purple energem bonds with her and instamorphs into the Purple Ranger. Keeper says it is a wise choice. She fights off the monsters. Shelby and Tyler come in and Kendall takes off Keeper's shackles. Shelby is shocked. The Rangers run off when they hear the signal. On Earth, the Ankylo-Pachy formation is made. Kendall informs the Rangers. Tyler splits up and hides and hears what Wrench and Sledge done with his Energem. Tyler reunites with the others and tell them what happened. Tyler splits with them, Shelby tries to convince him not to and the doors close in front of her. 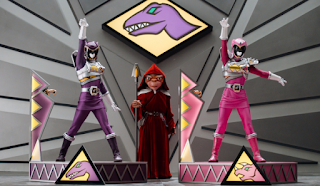 Tyler walks out of the prisoner hall in Sledge's ship. Kendall and Shelby pilot the Plesiozord with Keeper inside towards Earth. Phillip uses the wrenching ball against the monster but it is too powerful. The Rangers go down on the floor of the cockpit. Plesio Charge Megazord is formed. The male Rnagers go out of their Megazord and watch the girls fight the monster. Keeper teleports in and tells them that Tyler needs help. Kendall says controlling the megazord is amazing. A Vivik spots the GetBot and Tyler kicks it out. Tyler enters the bridge and takes down Viviks with his morpher. He finds the red energem and tries taking it out. Sledge blasts him down. 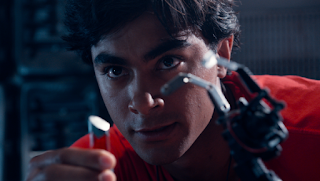 Wrench is locked to the Megazord and Sledge tries using the laser but the GetBot already got the energem. Tyler instamorphs and fights Sledge in his own ship. Sledge is knocked back on controls. It destroys the navigation. The ship says to evacuate. The ship falls and Red tries running out. A Vivik go in one last pod. Tyler opens the door and falls out of the ship. Poisandra calls Sledge a half-brain, he says after 65 Million years she figured it out. The ship crashes. Tyler is caught by the Pterazord. The Eight Rangers reunite inside the Ptera Charge Megazord. Shelby is happy that Tyler is fine. The T-Rex combines with the Plesiozord and Pachyzord to make Plesio Charge Megazord Pachy Rex formation. 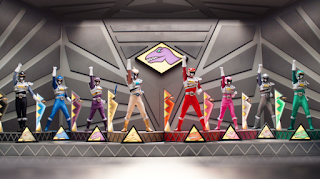 They take down the monster with Galatic blast and it explodes over the ocean. Back at the base, Kendall puts the purple Energem in the base part. Keeper says Koda, Ivan and Kendall will help find two more energems.  The others are free to go. Phillip says it was an honor. Ivan says he will miss them all. Koda calls them family and hugs them.  Chase is returning to New Zealand. Outside, Tyler tells Shelby he is still looking for his dad and asks her for help. She agrees after the usual Ranger suspense. They spot Riley struggling with his scooter. They go in the Jeep, Riley has a theory on where the last two are. Meanwhile in the crashed ship, a yellow-eyed monster inside the danger door cackles that it is his turn now. 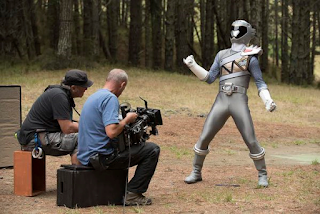 Review:
It was an action packed episode, I just wish it was two parts and the monster they fought was more complex and spoke. But the smoky and light effects were interesting but that was from Kyoryuger of course. It was nice to see Philip but it would've been nice to see him explain a little where he has been doing. It was nice the Rangers were sent home, it reminded me of the season finale of Samurai. Some have complained Kendall should not be a Ranger because of her behavior as an ally like telling Riley to leave his friends when Puzzler trapped them and her distaste for Shelby. I think it falls on the writers, different writers and their take on the character. Do I look forward to Dino Supercharge? More than Super Megaforce but not as much as the second half of RPM.
Posted by Lavender Ranger at 5:30 PM