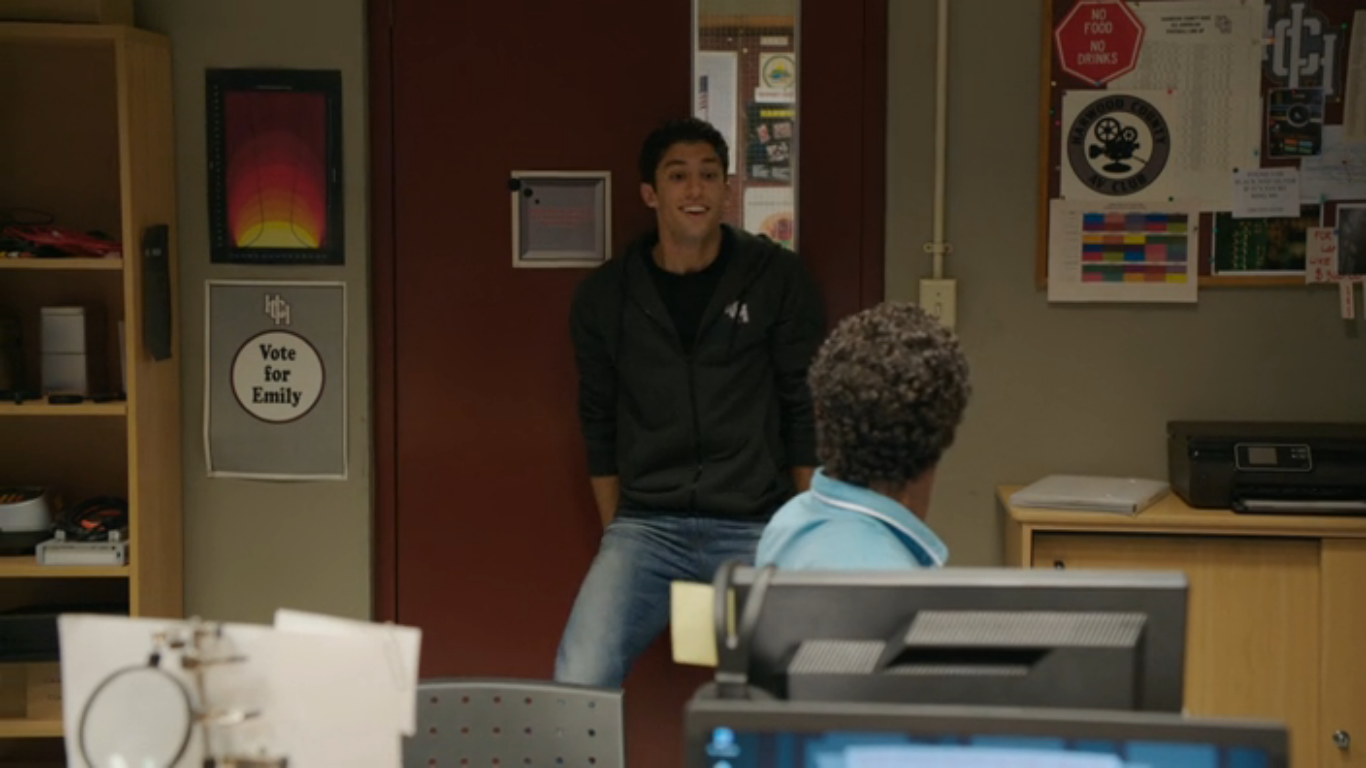 Summary:
Noah is working on dual-blaster in the school computer lab when Jake sneaks in and tries to hide Emma. He told Emma he was going to the Butterfly Sanctuary. He wants to trade places with Noah. Noah can't, he has to send work to Tensou. He asked Orion but he is working at Ernie's. Emma walks in. They hear screaming, morph and attack a blue and orange monster. The two go to Super Mega Mode. A man takes the Ambassador out and the monster is about to swap him with an X-Borg when the other Rangers arrive. Noah and Jake fight the monster. The monster Transferor takes Noah in his arms. Noah and Jake trade blasters. Jake blasts him off. Transferor swaps Noah and Jake and they fall on the ground unmorphed. The monster retreats. 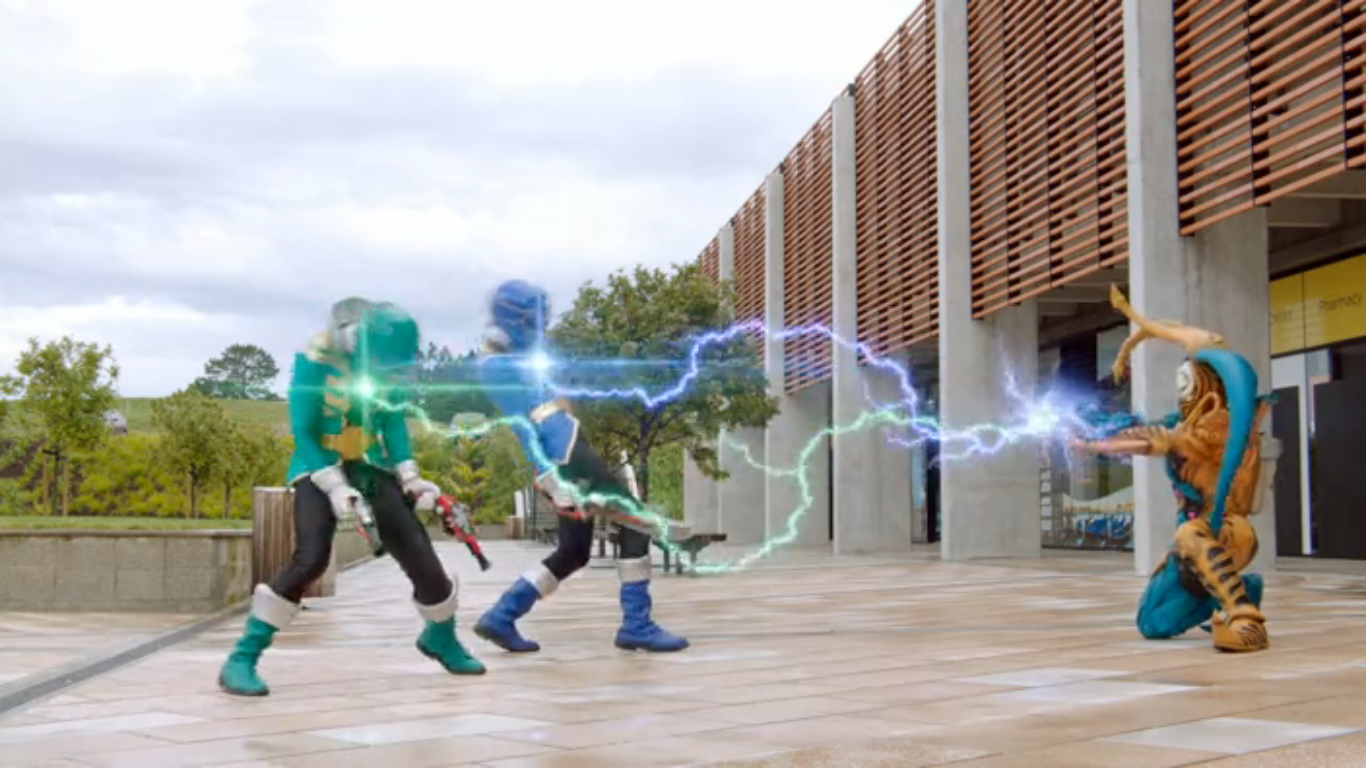 Jake's body has glasses and they realize they swapped bodies. There is a flashback for some reason. Back at school, Jake is his own clothes on Noah's body and Noah wears his clothes in Jake's body. Jake tells Noah to be more confident and smile, Noah does a creepy smile with Jake's body. Mr. Burley teaches Astronomy and he sees only Jake answers the questions. Mr. Burley takes Jake into his office to talk about his class performance, Jake as Noah tells Mr. Burley that Jake is smart. Gia asks Noah about planets and mistakes Noah for Jake in an embarrassing moment for her where she confuses them. 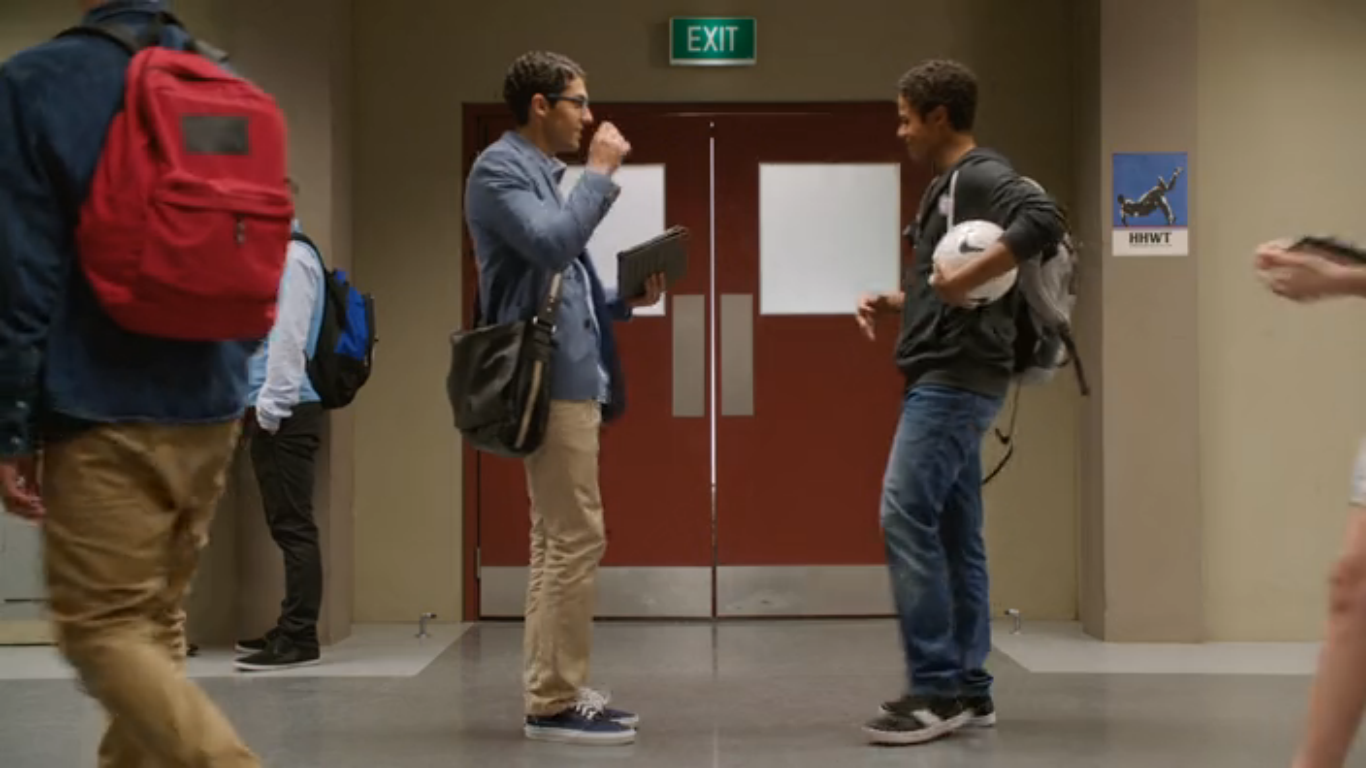 At the ship, the body-switching monster is berated by Vekar. Vekar tells Damaras to do as he plans. Levira says the Rangers will be destroyed easily. Vekar tells him to come up with a plan. In the Command Center, Noah works on the blaster. Emma and Gia says its wears. Jake says try standing in his shoes, Noah says they are his shoes. Tensou can't get a signal on Orion. The Super Megaforce Rangers are outside and Green blasts a rock away with his dual blaster. Damaras sends a seconder commander that is indestructible. Green gets blasted at and it's the second commander. Green says it's too soon to use the blaster. The other Rangers arrive and fight X-Borgs. They try fighting the monster but can't. They try their final strike but it is reflected back. Even Noah's dual blaster doesn't work. 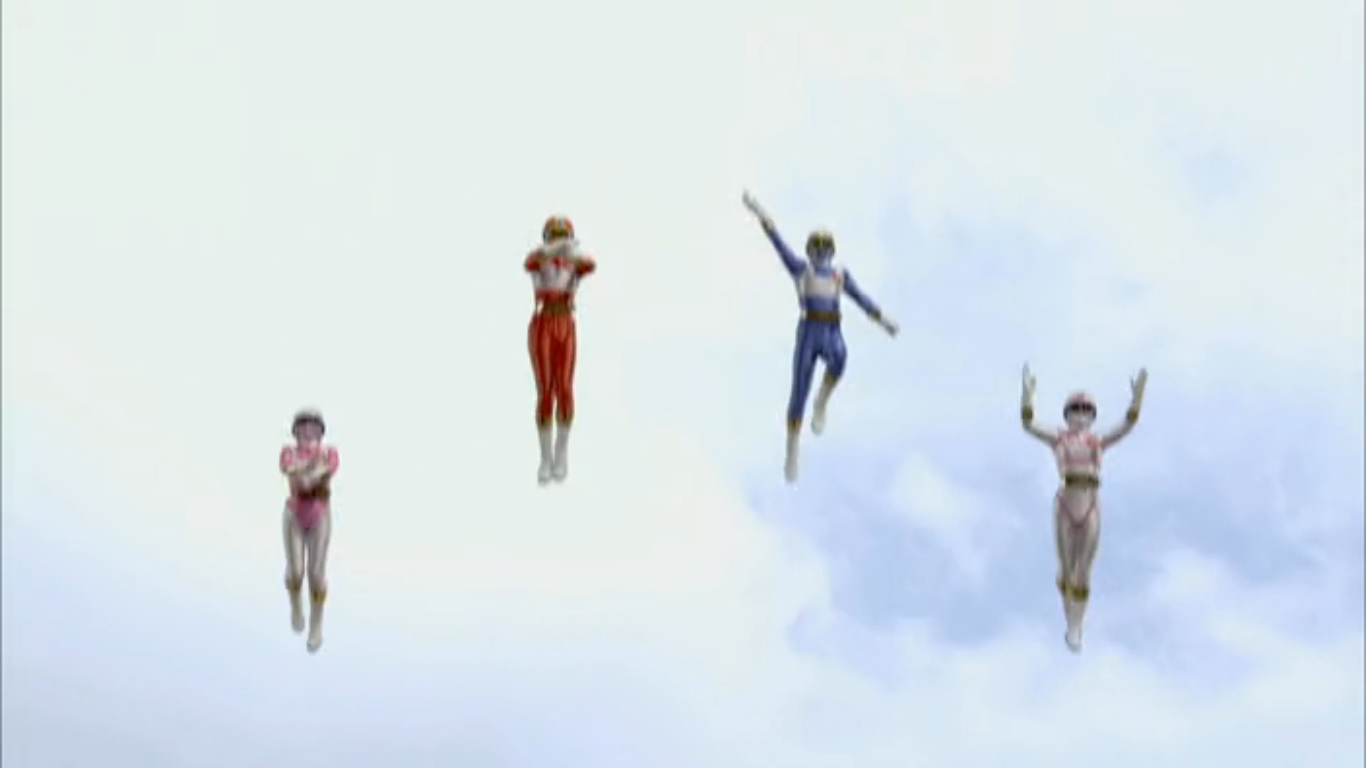 The dual blaster breaks and the monster blasts at all five. They become Alien Rangers and disappear. Noah says the only way to make the blaster to work is to build together so the other Rangers help to make the cannon like holding it and feeding Noah and looking intense and backing away when there is a blast. The alarm blasts. They wonder which monster it is. They leave without Noah. They jump out from the Sky Ship (weren't they in the Command Center?) and turn into Jungle Fury to fight the Bruisers. Vekar asks Transferor if he is ready. The four try the claw booster attack but it doesn't work. Troy says to tap into the Dragon power and they change into Changeman. They fail and fall. Noah gets the cannon working. 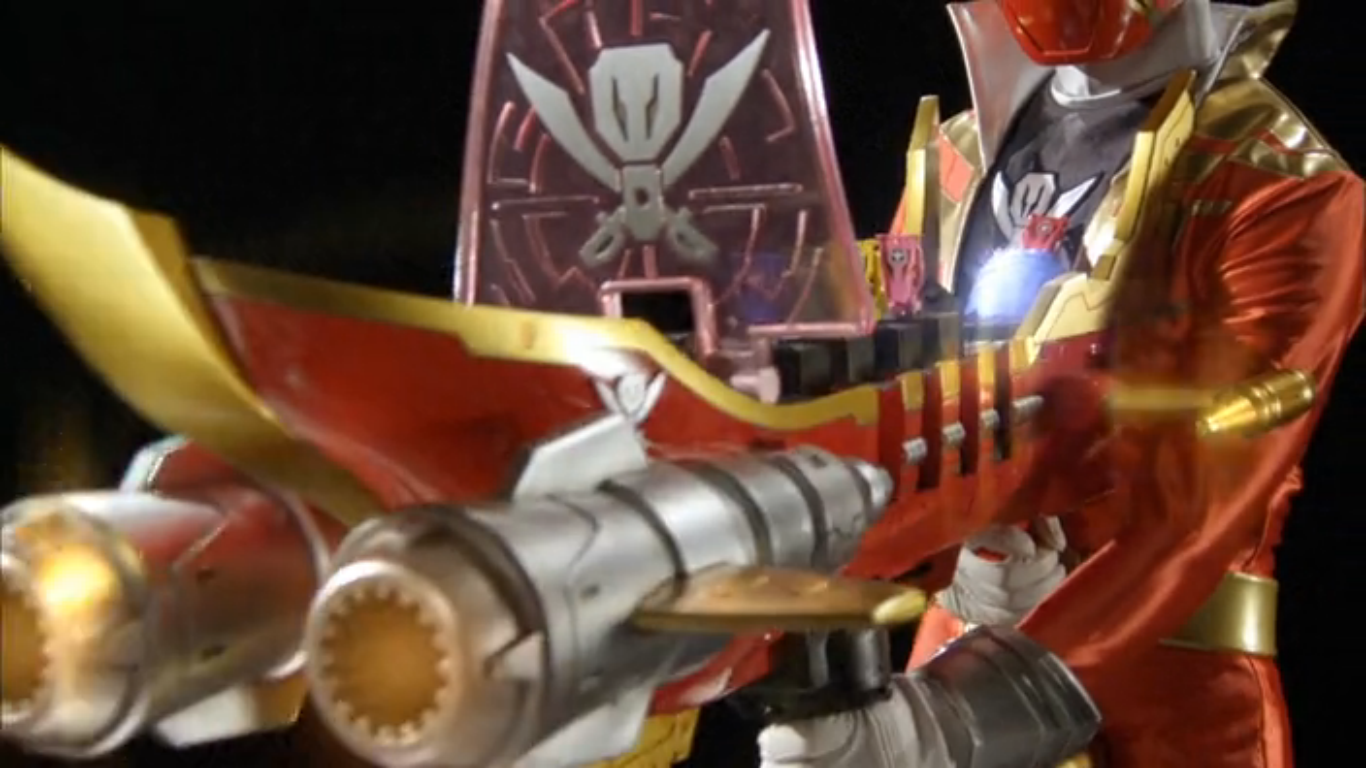 The monster blasts the four Changeman (they call them Dragon but only one has a Dragon) back into Super Megaforce. Noah runs in with the cannon blasting at the monster. He hands it to Troy. They put their keys and defeat the second monster. Damaras is shocked. Vekar sends Transferor who crashes a summit. The Rangers crash in. Orion is there too. Jake blasts Transferor. They all get out, the Rangers go after them. Gia and Noah fight the monster. Gia falls and Jake catches him, Gia calls him Noah. Noah and Jake double-team Transferor. The two trade weapons, Green with two swords and Blue with two blasters. They blast the monster. They switch back bodies. 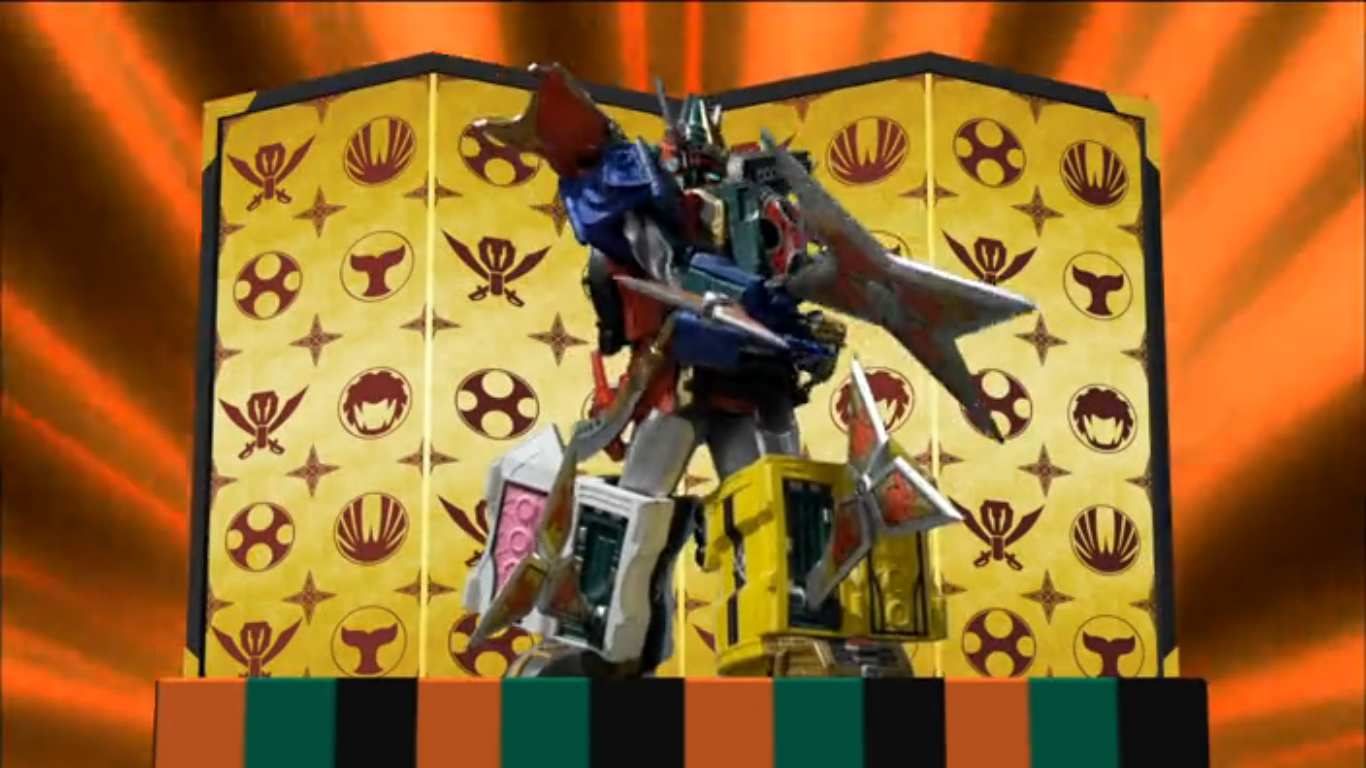 The Rangers re-gather. Transferor becomes big and Q-Rex and Legendary Megazord are summoned. They unlocked Ninja Storm powers somehow and call the Ninja Zord (quickly) and form the Legendary Ninja Megazord. They do a Ninja Storm final strike that the Ninja Zord multiples itself and destroys the monster. Later, all six teenagers. Jake says Noah doesn't quit. Noah says he can't do it without them. Orion says he was fixing the pod. Emma wants to go to Sanctuary and Jake says he is Noah and takes his glasses. She says nice try and grabs him. Episode Review:
Good try, funny moments but it is infuriating that they include Pre-Zyu teams like Changeman and omit the Extra Heroes, Lightspeed, etc.  I swear I saw new footage of the second commander so why not reshoot Changeman and replace it with Ninja Storm? I think the reason they used footage from two different episodes was to excuse the Green Ranger hold the cannon, so they said he switched places with Blue. But that's silly as they had to shoot new footage of them switching in the first place. The above picture, Troy is Mask Red briefly when the monster attacks them, but it is not mentioned, it is just skipped over from Gokaiger.
﻿
Posted by Lavender Ranger at 12:30 PM

I think the story writers need to go back to school to learn how to writes stories because they seem to have trouble prioritizing how the rangers should be in each episode. I mean the simplest thing to do would be to just have a Ninja Storm tribute that coincided with with Jake and Noah switching bodies at least then they can see the past team get a lesson from them then unlock their zord so it won't feel like they are unlocking it from doing absolutely nothing. Also nice review, and whoever was on production and never spoke out about the inclusion of Sentai teams never seen in the U.S. I'm deeply ashamed because it's very simple to not include them and the production did, 20 years my foot.