Power Rangers Dino Charge - No Matter How you Slice It - Review 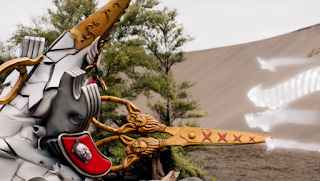 Summary:
Curio and Poisandra are friends and it is cut by the Monster of the Day in the cells. Sledge is mad at it. He wants the Rangers to cut their bonds. It is Riley's birthday and he doesn't want Koda to tell anyone. The Rangers slide down sand dune. Shelby lost her phone. The MOD snips their friendships, except for Koda and Riley. They start fighting. Koda and Riley encounter the monster and fight it. Chase doesn't help them. They fight the Viviks. They break the scissors and Shelby's phone captures this video. Koda gets the phone. The Rangers fight in the kitchen. Ivan dumps the vanilla frosting on Chase and the gour fight. Kendall whistles and Riley and Koda shows her how they are. She tells them to go to the base. 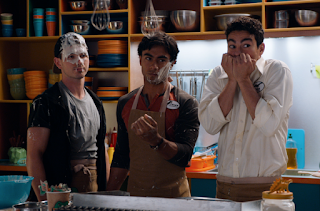 Chase says the monster has nothing to do it. Shelby says friendships don't last. Riley says they can build them again. Later, they tie together their legs in a three-legged race. It doesn't go well. Koda picks up Riley when he falls in a trust exercise and it goes bad for Shelby and Tyler and Chase and Ivan. Chase and the others give their Energems back and leave. Shelby doesn't care about Sledge winning. Keepers says their bonds will break with the gems and no longer be Rangers. Riley keeps checking his messages. He sees the video Shelby took and sees the Monster and his scissor broke when he tried to cut Koda's friendship bond, he says they are like family. Kendall needs a scissor piece to reverse the effect. 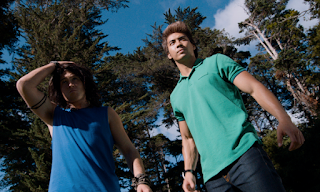 Wrench fixes the scissors. Sledge threatens him and sends Curio and Wrench with them. Koda apologizes Riley about his family forgetting his family seemingly. The monster's scissor breaks when he tries cutting Riley's bond and they were tricked as Koda and Riley switched clothing. Kendall takes the piece and they leave in a van. Meanwhile the others are in a bus station. Koda monitors the Energems. Chase asks for a bus for the airport. Koda and Riley blast the four with new Dino Chargers and fix the bonds. The gems glow and go back. The six morph. The Rangers fight the baddies. The monster targets Riley. Chase calls Dino Steel and protect Riley with Ivan. Ivan gives Riley his Pteracharger and they do an attack together. The monster is defeated. 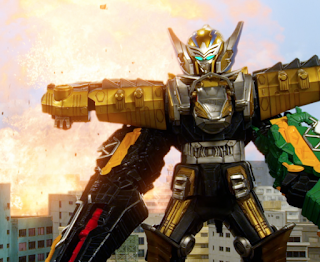 Viviks become Vivizords. They call the main Megazords. The five enter and call Dino Drive. The monster is big and calls another Vivizord. Ivan in Ptera Charge Megazord comes to the rescue. Black and Green call their zords to combine: Para Raptor Formation. Riley and Chase enter the cockpit and help Ivan. The others are freed. The new formation fights the monster. The main MZ destroys the Vivizords. The new formation destroys the monster. 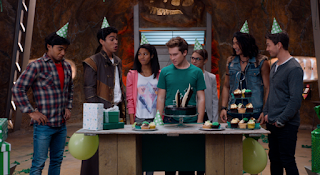 Sledge is mad at Wrench and Fury comes in saying he found the purple energem. Riley is sad he has no messages and then he gets a green-theme Birthday surprise party from the Rangers. Riley wished his family could be too. Ivan takes him, he gets a message from his family via a hologram message. 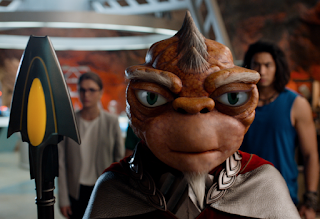 Review:
Cute episode. For some reason, it is hard to feel sympathy for Riley but I did get 'feels' when Koda said his friends were his family. It was interesting to see the actual family of Riley. It is interesting they added Fury to the tail end to mention the purple Energem.
Posted by Lavender Ranger at 7:13 PM