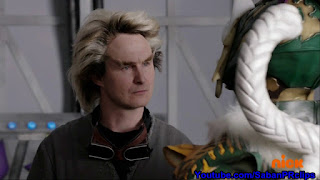 Mick has made a satellite to mind control. Brax asks for another chance. Odius says they will be watching tv instead. Dane gives a ride to his sons to the school. They have an audition for a TV show. Calvin comes late and Hayley is upset. He had engine trouble and forgot her props. Preston doesn't help. Hayley auditions. Vic and Monty audition. It ends up being funny, getting them the audition. Hayley and Calvin have an argument. The Rangers then see the audition guy turn into a monster and kidnap Vic and Monty. The Rangers morph and fight Gorrox. Brody dons Fire Armor. 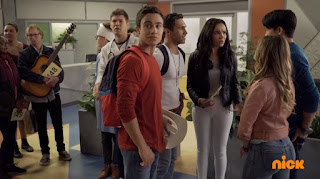 Brax returns. Cosmo makes both big. The Rangers call Ninja Steel and Ninja Blaze Megazords. They form the Ultrazord. They do their finalizer. Gorrox is destroyed. Brax hits them hard. Red forms Ninja Blaze Ultrazord. Sarah and Levi wield the Ninja Steel Megazord and attack first. Brax apologizes to Badonna and is destroyed. The Rangers return. Calvin tells Hayley she could've end up on the ship and says she shouldn't be mad. She is still angry and argue more. Preston tries to but in. Hayley thinks they need space. Calvin leaves. 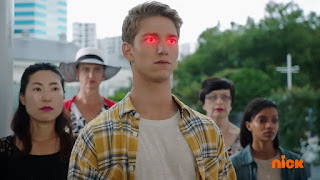 Badonna mourns Brax but goes nuts for the clowns (Vic and Monty). Vic and Monty aren't so happy but are  threatened. They are pushed to perform. Cosmo threatens them with a spike ball. They broadcast it to Earth to hypnotize them. A teacher tries changing channels but gets hypnotized for their trouble. Redbot finds the signal. Sarah asks Hayley if she is okay. Sarah and Hayley girl-talk while the guys keeps going. Sarah tells her she is a good performer and that she was a bit over the top. Hayley realizes Calvin was right. Sarah tells him he is better than he used to be. Hayley calls Calvin, he doesn't answer her and gets hypnotized too. The Rangers find the school is locked and the hypnotized principal tells her to go home. They see Basherbots inside. The Rangers talk to Redbot, he tells them of the show beaming to Earth and not to watch it. Redbot tells them about the mind control signal. Mick arrives, they see him bowing to Odius. They realize he is under her control. Badonna lets the army out and sent to the ship. To Be continued...

Review:
People were criticizing that Sarah says Calvin was 'better than before' like that old excuse abuse women say about abusive men. I like there was a riff between Hayley and Calvin. It was subtle all season with Calvin being forgetful and Hayley getting miffed and it now all coming to a head. It could've been handled with better tact though and stronger arguments for them sticking together. Sometimes two people aren't meant to be a relationship and better off as friends.

Posted by Lavender Ranger at 6:52 PM