Saban and his toys 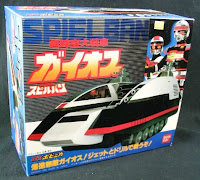 VR Troopers
But when both series were made into VR Troopers (1994), it did not air on Fox Kids like Power Rangers. VR Troopers was syndicated and surprisingly, the toys were not produced by Bandai. The reason is unknown for this but the toys were made by Kenner, best known for being the first to produce the Care Bears in the 80's and also Batman. They were mostly new action figures produced. I don't know if the vehicles were the same mold, I doubt it. Some theorized Bandai Japan didn't have the molds anymore since the series were old (7-8 year difference) and Bandai America didn't want to make new molds, but that didn't stop them to do Masked Rider toys. 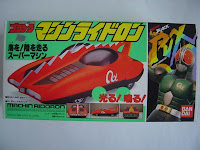 B-Fighter / Beetleborgs
B-Fighter (Early 1996) became BeetleBorgs (Late 1996) and Bandai stayed on board, dunno if they were new molds, looks like yes. Maybe not the ATVs. I never owned any of these toys. 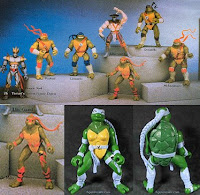 Mystic Knights of Tir Na Nog
Since Mystic Knights (1998) was completely original series with no Tokusatsu footage, Bandai America had to make new toys. Only one toy has been repackaged for Power Rangers, and that was one of their dragons for Mystic Force (2006).

Posted by Lavender Ranger at 8:26 PM

I recently came accross your blog and have been reading along. I thought I would leave my first comment. I dont know what to say except that I have enjoyed reading. Nice blog. I will keep visiting this blog very often.