UPDATED 9/4/14
Now that Power Rangers is ending, I thought we look through the years and see what ethnicities have been used.
Who knows what heritage Alyssa (PRWF) was?
Jessica Rey is Filipino, Angie Diaz (Vida), Rhoda Monymayor (Rose), and Jeffry P. (Trent) were also Filipino. It was never mentioned on the show what Alyssa the character's heritage was. Her father was Native-American, we may never know. 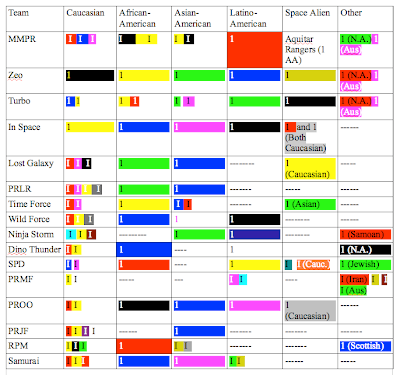 Hey I realised you keep missing out every details about Cam the Samurai Ranger. He is one of my favorite so I noticed.

I researched this before and Angie Diaz(Vida), Rhoda Monymayor(sp)(Rose), and Jeffry P.(Trent) are Filipino. And when I was on your RT(as magnusX)someone said that the actress for Maddie is half filipino.
Please respond to me on what you think on my myspace provided below
http://www.myspace.com/sandairinjyu
you have to friend me to talk.

oh you forgot Jessica Rey ( PRWF White) she is filipina

Firas Dirani, red ranger in Mystic Force, is the only Arab/Middle Eastern to play a power ranger, he is of Lebanese origin (though his character was of "mystical" parentage).

silverlining, thanks for the comment but I already know this, its the actor but I was talking about the characters. Do you guys want me to cover the actors as well? I'd be willing to do that but with help.

Sorry for not getting back to you Gerald until now.

Well I guess going through every actor's ethnicity would be quite tedious, I'd never want you to go through the trouble love.

Thanks for the great blog !

Kendrix was not an alien; KARONE was (you show Karone in the pic, but named Kendrix; no biggie, just happened to catch it).

Trey was an alien, who was the Gold Ranger. Therefore, an alien HAS been Gold.

I think its safe to says if the race of the character was never explicitly stated on the show (like Tommy), then they are the same race as the actor. So I guess that makes Alyssa, Blake, Trent, the Rocca sisters, Rose & Theo Filipinos. So that adds 7 people the the Asian rosters.

I think we should say that the black power rangers are not all african american, because that refers to americans of african descent. But in the case of blue Dino thunder and red SPD who are African Canadian, it's also similar to Red RPM and white Ninja Steel who are African Australian and African Kiwi, so maybe we shouldn't have used the term: African american, but maybe "Of African descent".