Greener on the Other Side: Why You Should Watch Super Sentai

Sure, it is in another language, a hard one to understand and a completely different culture, but I think everyone should give Super Sentai a chance. For those who have steered cleared from knowing what Super Sentai is, 'Sentai' means 'team' or 'fighting squadron' in Japanese. It started with the series Himitsu Sentai Goranger (Secret Squadron Five Ranger) in 1975 but the franchise wasn't officially called 'Super Sentai' until Battle Fever J in 1979, which every year afterward the series got a new title, cast, costumes, villains, plot, etc. ever since. In 1993, the 1992 series Zyuranger (pronounced in English as 'Juu-Ranger') was adapted into Mighty Morphin Power Rangers.
5 Top Reasons why to watch Super Sentai... 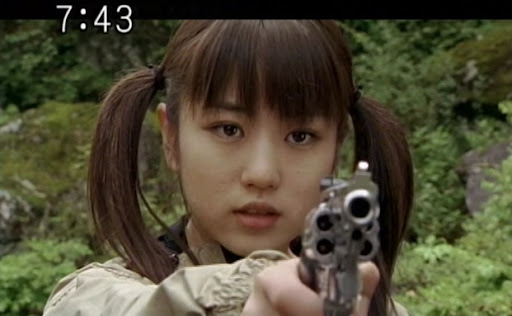 5. Guns
For one thing, there is a lot more violence. Guns are used prominently. This might not seem like much but a gun has never been shown in Power Rangers, unless held by a villain but it would shoot a laser. Above is a hero, Natsuki/BoukenYellow of Boukenger (2006), which was adapted in PROO. Why are guns being in Super Sentai so important? Because it shows realism in the series, the Japanese culture are not shy of showing children the real dangers. Super Sentai is most prominently aimed at Children but has humor and situations that Adults can relate to or enjoy. 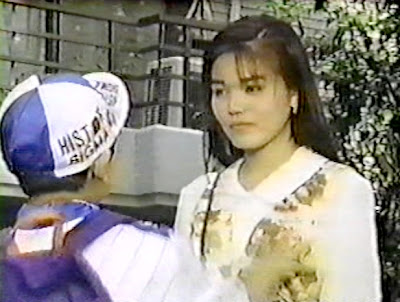 4. Perversity
Above is the Kibaranger (white) groping Houhouranger (pink) in Dairanger when he first meets her. Perverts are common in Japanese programming like Anime and live-action shows. Super Sentai has plenty. Not only villains, monsters, but also heroes and allies. For example, in the 2007 series Gekiranger (Jungle Fury) had an elephant anthropomorphic ally named Elehan Kempo, who was a pervert, always touching the Yellow Ranger inappropriately. Again, not a great moral choice but it always wise to show real human faults. Sometimes shown for laughs, perversity is not always taken lightly, it is punished most of the time. 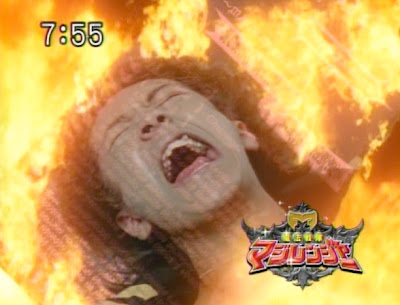 3. Storylines and Writing
The writing is much better and there is more consequences. For example, in Power Rangers--mainly the first seasons, a Ranger would do bad things due to a spell and then be redeemed by the end of the episode, but in Super Sentai, when you do something wrong, you pay the consequences and sometimes there is a long road of redemption. While in later seasons of Power Rangers, there is periods of redemption like in Wild Force (2002) with Merrick feeling bad for things he did as the wolf demon Zenaku and not hanging with the main crew and Operation Overdrive (2007) when Mack finds out his life is a lie and treats his 'dad' like crap for half the season. In Magiranger (2005)--(Mystic Force) above, Tsubasa was warned not to use black magic and he did so and then got a chasm on his chest and then in the next episode, paid more consequences. But in Mystic Force, his counterpart just got a 'evil spell' on him. 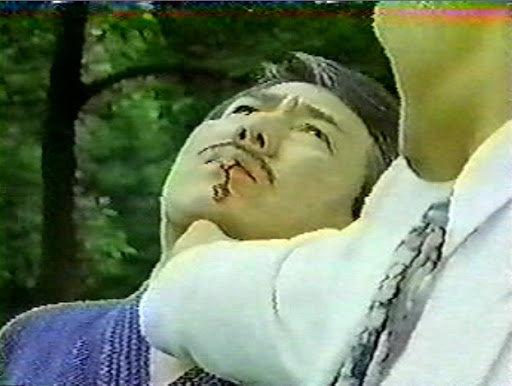 2. Blood
Blood and lots of it. Dairanger (1993) has the most blood of any Sentai series, parents complained and blood has been reduced but not disappeared. When Rangers are beat up or blown up, there is blood. Most of the time now it is found on the corner of their mouths. And now when a Ranger gets injured, they stayed injured for at least a episode or two. 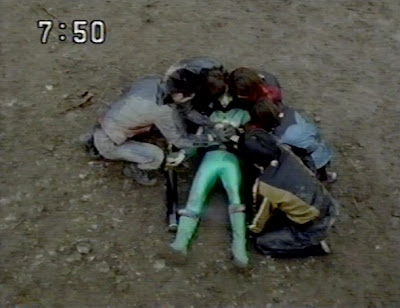 1. Death
Yes, heroes die in real life and they do so here too. The first hero to die was in Battle Fever J, Battle Cossack, who died in battle. The second one was Mika/Yellow Four in Bioman (1984) was killed in battle by the 10th episode. Third: Gai/Black Condor of Jetman (1991), who was stabbed three years after being a Jetman. Fourth: Burai/Dragonranger of Zyuranger (1992)--(MMPR), died of complications with being cyrogenically frozen. Fifth: Shurikenger (above) of Hurricanger (2002)--(Ninja Storm) who died in battle. Sixth: Mikoto/AbareKiller, who was not all hero, but died in an explosion cause by his transformation device in Abaranger (2003)--(Dino Thunder). And two main characters died in Gekiranger (2007)--(Jungle Fury): the main human antagonists Rio and Mele. A Sentai producer has stated that they wouldn't be killing any more heroes in the meantime of war and immediate danger in the world.
Censorship 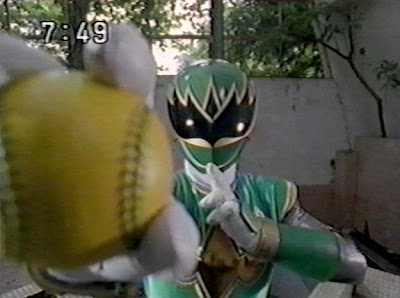 Shurikenger used his sword as a baseball bat and used baseballs in attacks, this was omitted from Power Rangers Ninja Storm in fear that children would imitate this and hurt someone. Furthermore in PRNS, the rangers would shoot lasers out of their morphers... well, in Hurricanger, they would throw ninja stars. The Dekaranger (2004) bullets were also replaced with lasers in SPD (2005). 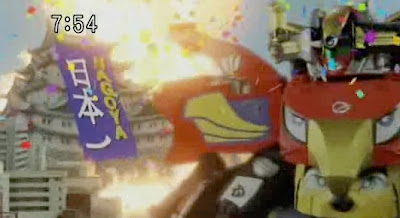 Things that turn off many PR fans from Sentai is quote 'how goofy it is.' It is true that Sentai is more serious than Power Rangers, but it is also somehow goofier than it as well. Its humor is very diverse. Carranger (1996)--Turbo, was more of a parody of Sentai with its exaggerated-looking monsters. And Abaranger had serious moments and ridiculous ones as well (As shown in the Dino Thunder episode "Lost and Found in Translation"). It is a cultural thing and you get used to it, sometimes it is stuff you can just put up with because it is Japanese.

Posted by Lavender Ranger at 9:22 PM

I should correct you. I think it was Ki Ranger 2 who died first stabbed by Can Opener Mask.

Btw I do agree that sentai story lines are better especially in moral assessment rather than just being under a spell- it's putting on what decisions we make.

Also, I think it should be mentioned about Ryu "peeping" at the girls as a classic example of consequences.

I kind of think that Guy's "death" is still left to debate. It's in my blog.

There was a gun present in an episode of Lightspeed Rescue when Dana was riding on a bus to see a volcano. It was a small gun, and wasn't fired, but still a gun none-the-less.