The Power Ranger Series That Never Was 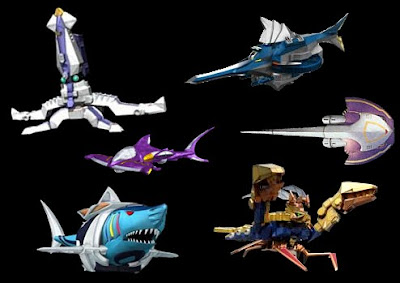 Since Power Rangers moved to New Zealand, it has been closer to Japan and this has helped with getting more props and sets from Sentai to Power Rangers. For Toei's Magiranger (2005) and Gekiranger (2007), some footage was shot in New Zealand. Normally a Sentai Series is shot one year and then adapted as Power Rangers the next year. When Super Sentai footage was shot in New Zealand, it sprung up rumors that the same elements (theme, costumes, props, robots) would simultaneously be shown in Japan and America at the same time in 2007 instead of waiting a year. It was a plan being worked out by Toei and Disney. It was a dream to have both series working simultaneously. So for example, it is if SPD and Dekaranger were made and aired the same year.
Meaning, the same theme would be on the same year, two different series, one Super Sentai and the other Power Rangers. This would have been done in order to make it smoother Power Rangers season and for Disney to be control. Allegedly according to one of my sources and I don't fully believe it, the series was to have an underwater theme and the title was allegedly “Power Rangers Atlantis,” based on the Altantis mythology. The Rangers were going to be have ‘sea friends’ and their base of operations was going to be in Atlantis. There was to be a scientist for comic relief. They were going to ride stingrays, have a mermaid friend and an Orange Ranger based on an octopus.

This is not my fabrication because I have would come up with something better. I don't like the idea of an Orange Ranger in a Sea-based series. Maybe if it wasn't going to be for the same year, or a reverse of what has been going on for 17 years, a Power Rangers series that became a Super Sentai series. This was Disney's plan but eventually they dropped it. One reason could be that is was dropped is that Disney didn’t want to produce essentially an entire Toei series. I got this rumor in 2006, meaning this came before thoughts of an Animated series. I thought it would be interesting to finally put this out there in the ether since this most likely won't happen, and that MMPR is being re-aired in 2010 and there will be no original series for 2010. I always wanted a sea-based series, and it would have been interesting.

Fans think the reason Toei has never done a sea-based series is because it would probably cost way too much to produce. But apparently Disney had high hopes in doing it (due to the high concept) and making their own series. So if this rumor is true, then Disney did think of making of their own series without Sentai footage and the deal was to give the footage to Toei, as a trade-off but like I stated before, Disney probably didn’t want to produce a whole Toei series and the costs would have been enormous. Disney has cut the budget of Power Rangers now because costs were too high and they have Sentai footage, imagine how big the budget would be without Sentai footage. This whole rumor sounds a bit believable because Disney does want to be in control and this sounded like a compromise to Disney wanting control but I guess it wasn't cost effective. But, times changed.

Posted by Lavender Ranger at 11:42 PM

that would hav been dope... Disney has gotten terrible... they used to never care about money but now its all about money. if they aint making money than they stop it


what happened to the audience's opinion