UPDATED 7/16/14
I have a very gracious thank you to the legendary and hard-working Sir Stack.

Snow Monster
In "Storybook Rangers," they faced a snow monster, which was a re-paint and wigged out Primator. Primator was from the new batch of monsters made exclusively for Power Rangers by Rainbow Productions. 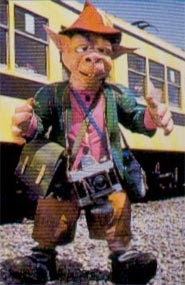 Turkey Jerk
A re-fitting of Dora Cockatrice (Chunky Chicken). It is rumored that there was some of Pudgy Pig in there but it is debatable.

Repellator
Repellator, basic repaint of Ikazuchi but with a big tongue. Appeared in Season 3 episodes "A Friend in Need." 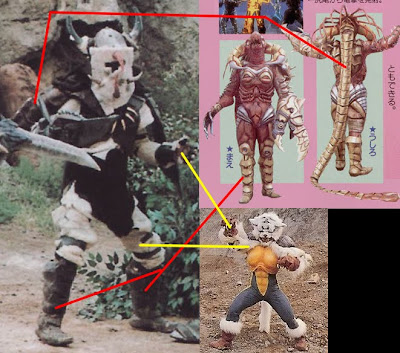 Part of the Plague Patrol on Edenoi in "A Friend in Need," this one was had the tail and boots from the Lami Scorpion monster and claws and re-fashioned arm fur from Bakeneko (Kakuranger) as leg covers. 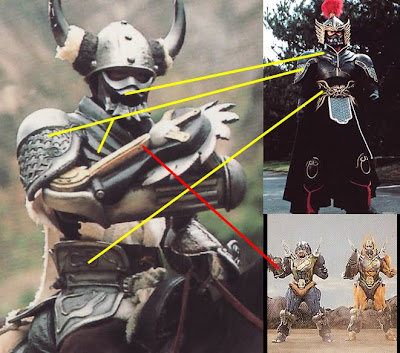 This one had the armor and face plate of Iron Face Zhang Liao, Ryou's father in Dairanger and the chain saw from Shuten Douji Brother of Kakuranger. 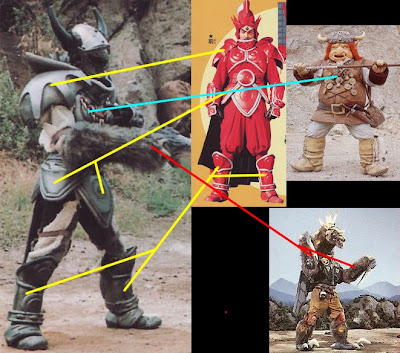 This guy had most of the silver version of Jiaxu's armor from Dairanger, chest plate and some other things from Dora Goblin (Gnarly Gnome) and the furry arms from Kamaitachi of Kakuranger. 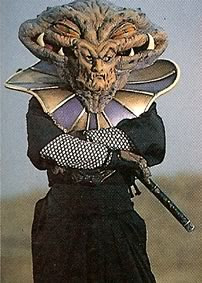 Incisorator
Incisorator of MMPR Season 3, made from Nurarihyon Kakuranger, the arms and legs of Shuten Douji Brother from Kakuranger and the cape of Bird Cage Vagabond from Dairanger.

Majority of the monsters made of other monsters was for Power Rangers Turbo, Power Rangers in Space and Lost Galaxy were only background characters. I will not cover them because the majority of the pictures that can be found are in Grnrngr.com. There were plenty of them, most of them hung out at the Onyx Tavern, different planets and with Divatox's army. 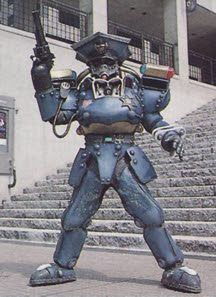 Electrotramp
Electrotramp who fought the Ninja Turtles and the Space Rangers, he was made from Bara Ivy and Bara Police from Ohranger. 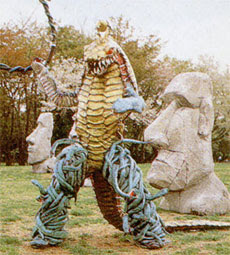 Cobra Monster
The Cobra Monster from Lightspeed Rescue was made from Dora Ladon of Zyuranger (Snizzard of MMPR). 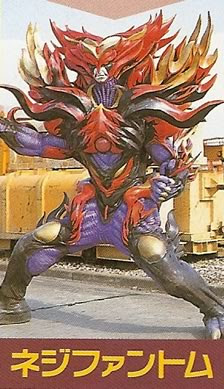 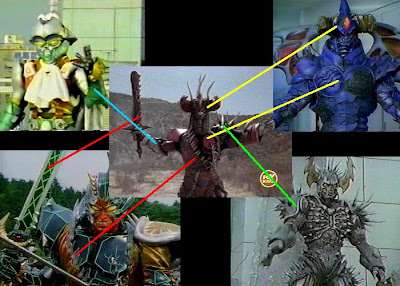 Rofang
Thank you to Sir Stack for the corrections! One of the MutOrgs, came from multiple places. The chest slice thingy and legs was from Giga Guirail (Megaranger); spikes from Raima (GoGoV); arm cuffs and boots from Kaiser Buldont (Prince Gasket); and head, neck and inside chest of Underworld Nejilar of Megaranger. 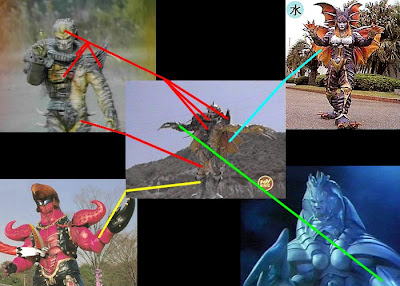 Kired
Majin Biznella from Gingaman made most of the body, the head, chest, shoulders and legs; the boots are from Kolshizer of Gingman (not arms); the wings from Zairen of GoGo-V; and his right hand is from Monster Melzard of B-Fighter Kabuto. Thank you Sir Stack for the correction! 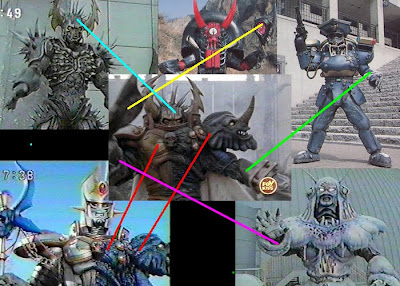 [No Picture]
This unnamed monster from SPD had the head of Biznella (Gingaman) and the body from Boribaru from Timeranger vs. GoGo-V and some part of Death Nejiros from Megaranger.

that is impossible for the lead mut-org cuz magiranger didnt come out yet. i think you mean moto mantis from lost galaxy

It's not just Rofang's cuffs that come from Prince Gasket, but both his boots, as well.

Takach's left hand and wrist is from Bara Police (you can see it right in the picture), and his right arm comes from Jeeruda.

Hi, my name is Masanori,

Wow, is Inpressive you know?

Off course, who knows the part of the Plague Patrol on Edenoi in Mighty Morphin Power Rangers season 3; there is a combination of the Kaleido Rider´s vilans (my brazilian super hero´s creation)!

I like the Mix and match Power Ranger´s monsters & Villans!!