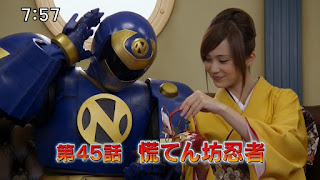 Episode 45:
Awatenbou Ninja (Confused Ninja)
Airs- 1/8/12
Ninjaman appears from the jar in Megakure Shrine! Since he was sealed, and does not know of the Legend War, the Gokaiger explain old battles to him (sounds like a clip show). Ninjaman was sealed into the jar 10 years ago by the Sanshinshou, due to a certain incident, and as such, was not able to participate in the Legend War. The Gokaiger will try and get the Kakuranger power from Ninjaman, but it seems like a difficult task. Ninjaman decides to live with the Gokaiger aboard the galleon, to observe them. In other words, they have to impress him to get the power. 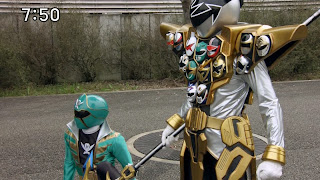 Episode 46:
Hero Goukaku (Hero Success)
Airs- 1/15/12
The evil in the hearts of Don and Gai is magnified by the powers of the new Action Commander, Evil Spirit Faith Healer Jyujyu. With Ninjaman observing the Gokaiger, what is about to happen?! 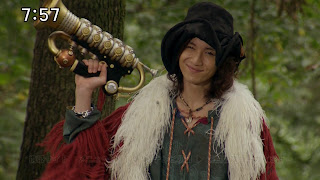 Episode 48:
Shukumei no Taiketsu (Showdown of Fate)
Airs- 1/29/12
Second part of the final fight with Basco.

Posted by Lavender Ranger at 9:03 PM