I'm typing this from my new Dell laptop. That's right, I've gone from Mac (since 2006) back to PC. I've had a PC since 1994. Pictures from Samuraicast.com 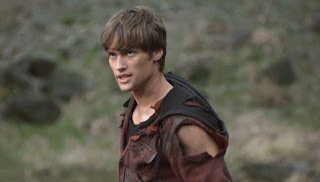 Summary:
Xandred says Dayu should have embraced her Nighlok life. Dayu says her human heart never allowed her to do it. Xandred merges with Dayu and holds her dress, and shocking the Rangers. Xandred asks for the Red Ranger and Lauren arrives. He says "What can a little girl do?" He sends an attack and Antonio and the others defend her. She gives Kevin the Black Box and Shark Disk to Mike to distract him as she seals him. Xandred rapidly takes care of the five. He goes after Lauren but the others hold him off. Lauren writes the sealing symbol. Jii hopes his training was enough. Light Zord comes in and defends Antonio. Jayden fights Moogers. 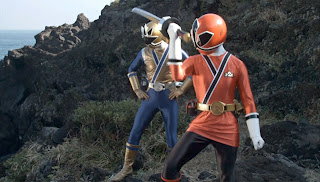 The five are knocked down. Lauren is almost done when Jayden arrives. Xandred and Lauren slash at the same time. Xandred is pushed back but not sealed. Lauren goes down on her knees. Xandred comes out of the fire, surprising them. They notice a white patch on his chest that he got from Dayu, He doesn't need Sanzu River water anymore. He knocks the six down. Lauren falls and de-morphs. Jayden runs to their aid and teleports them all away. 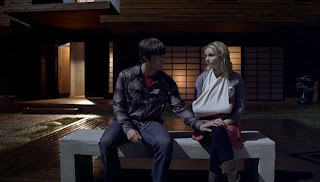 The Rangers are feeling down at the headquarters. Emily feels sorry for Lauren as she spent her whole life learning the symbol. Jayden talks to Lauren outside in the dark. Lauren has a sling on. She says she let everyone down, even their dad. She is handing the leadership back to him, the right thing is to lead them. He says he'll do his best, time to finish what their dad started. Lauren calls for a meeting. The Sanzu River is about to overflow, Octoroo and Xandred talk. Xandred drops the Dayu dress into the river. 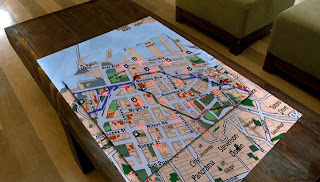 At the meeting, Lauren announces handing the leadership to Jayden, which Mike likes. Jayden tells them that he has a plan, to take him out with brute force. They chuckle. He has a weak spot---Dayu's white patch, They need more power.,. Lauren gives Jayden the Shiba Fire Disc, loading it with enough fire symbol power from Lauren since she is too hurt to fight. Jii prays they come back.  Buildings glow red, people scream and a giant invasion to the city occurs with the sanzu river flooding in and Moogers plying out. Then Lightning McQueen flies over a canon, oh wait, that was a commercial. Sorry, this ep needs comic relief but Bulk and Spike didn't appear. They will next week! 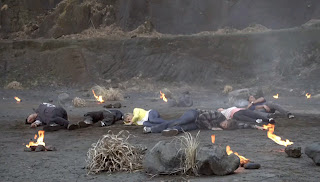 So Xandred and Octoroo ride on their ship. The six Rangers dressed in Samurai training clothing, including Antonio (it is the first time I remember seeing him in it outside of the morphing sequence), When the Moogers notice them, the six morph and fight. Jayden goes Super Mode and the Rangers plank around him to get to Xandred, at the end of a horde of Moogers. Spitfangs attack Antonio and he destroys them. Xandred pitys them. The moogers are clear and Kevin and Mike take an attack for Jayden. Jayden uses the fire disc and points it in the white spot on Xandred, Xandred holds the sword and says the old speil ("can't defeat me that easily"). The disk breaks. The Rangers de-morph. They won't give up. Xandred wants to capture Lauren. Jayden faints. To Be continued.... 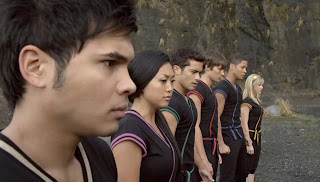 Review:
Favorite quotes? "Epic win for you," Octoroo says. Also Mike's "Booyah" in an inappropriate spot. Two episodes left! The finale next week and then the Christmas Special, which most likely takes place before the final episodes. I'm proud to announce that Lionsgate will be bestowing the 20 members of Power Force the 20 episode 3-disc Blu-Ray Super Samurai full season box set. Some of us don't have Blu-Ray so keep an eye out for giveaways and eBay sellings.
Posted by Lavender Ranger at 1:30 PM