A.K.A. Show off the Mega Mode because let's sell off the last remaining Samurai toys before Megaforce starts
http://www.samuraicast.com/gallery/thumbnails.php?album=569
Pics thanks to Samuraicast.com 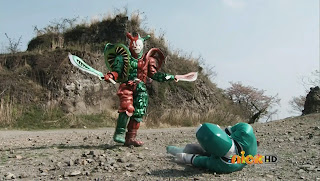 Summary:
Jii sets up the CHristmas Tree, the Rangers fight Gred (half Red and Green Nighlok--who imitated Shinken Green in Shinkenger) in a quarry. Mike fights it off and then they destroy it and fight it with the Battlewing Megazord. Once the monster is destroyed, they are stuck in the Megazord and must find a way out. So the flashbacks start. Kevin recalls Antonio programing the Clawzord. Jayden reminds Kevin that Kevin was able to help them with his plans. 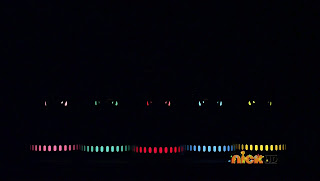 At the Shiba House, Mentor Ji opens the door to find Bulk (dressed as Santa) and Spike (dressed as an elf). Spike wants to deliver a present meant for Mia. Jayden remembers the time when Kevin and Mike were stuck together. Mia asks Emily what they should wear for Christmas. Mia remembers the time they went on a shopping spree in the "Strange Case of the Munchies" episode. Bulk asks if 'drill sergeant' is at the dojo. We see a flashback of Emily training Bulk and Spike. 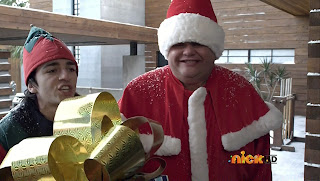 Bulk and Spike help Mentor with the tree. Jayden calls Jii about what is going on. Mia and Emily cheer up Mike with a flashback of Antonio's concert and when Mike took a pic of Kevin in a ballerina outfit. Spike attempts to put the angel on top of the tree. Bulk and Spike remember the day they saved the cat. Jii tells them they are heroes and gives them cookies. Bulk tells Mentor that they have helped the Rangers. We see a clip of Bulk and Spike running from Moogers. Mentor replies that they are all lucky that the Rangers protect everyone. 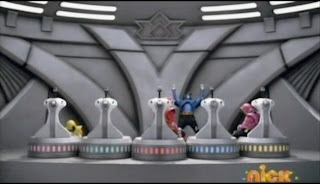 Clips of several battles where the Rangers defeat the Nighloks (including the Origins episode) are shown. The Rangers say they owe a lot to Mentor. Mia thinks he is lonely all alone. Spike tells Mentor how he met Mia and she told him to never give up.  Bulk says Mia introduced them to a young fisherman named Antonio. Jii didn't realize it was so late. Kevin continues on the Megazord repairs. Almost everyone is sleeping. 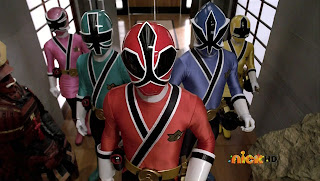 He fixes the problem with red and green wires, saying it is a Christmas miracle. Emily screams "Merry Christmas." Jayden calls Mentor that they are on the way. Mentor asks for a quick favor on their way home. Bulk and Spike wake up and want to sneak out before 'the drill sargeant' returns. Mentor Ji stops Bulk and Spike and tells them that he has a surprise for them. The Power Rangers (morphed) walk inside the Shiba House, shocking the two, and thank the two for their help. The duo leave happily. The Rangers close the door. We see Santa fly across the moon and then we see Bulk and Spike fly in a motorcycle and they say "Merry Christmas to all." 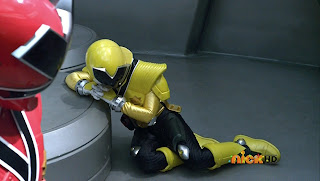 Review:
People have said how they have liked "Party Monsters" and early reports say they like this episode. It is funny how the only popular episodes these two seasons are clip shows. "Strange Case of the Munchies" is also popular, because it is funny and a bit out of the Shinkenger mold. I think the episodes that mix Bulk and Spike with the Rangers. But I heard that Tony Oliver wrote the Bulk and Spike stuff separately so maybe it was hard to get them to mix it up. I think it was a good episode but I would had love to see the Green Ranger in Shogun mode. The flashbacks were okay but if there were less, they could had fit in more Mike stuff. I kinda am disappointed that the footage episode they  used was not a fully-used episode. It had great character development for the Green Ranger.
Posted by Lavender Ranger at 1:46 PM

I don't know if you noticed yet, but part of the post is surrounded in a white box. Just giving you a heads up.