SPOILERS
SPOILERS
These are spoilers for Power Rangers Megaforce...

Today is 12/12/12 and it is the last day we will have until 2101 that will be the same number for month, day and year. Anyways, last night we got this picture from fellow Power Force member DarkBlaze found this pic. It has been cropped to take out crewmembers. This series hasn't even started and we are already getting spoilers. 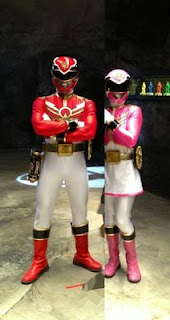 Here we have Red and Pink Megaforce Rangers. To the right of Pink, we see four solid-colored figures that look like Ranger Keys. Some people think they are not Ranger Keys but I think they are. Other people are thinking they are Magiranger keys or other keys but I think they are just solid-color keys. Other people think it is a Command Center and that it is bad looking. But we don't know what it is. My theory is that the Megaforce Rangers will touch the keys and become the Super Megaforce Rangers (Gokaiger) and the keys will take form (black legs).But why filming this so early? Could they already be done with the first 20 episodes? Who knows?
Other people are thinking the green key is for Gosei Green but I think it is for Gokai Green. That is hopeful thinking. Other Power Force member FuryDiamond says his source says the Goseiger suits will be used for both Megaforce seasons. But I think it will be the Gokaiger. With the auditioning for an actor for the Silver Ranger (which people think is GokaiSilver)--it is thought that they are pulling a season 2 of MMPR where Kibaranger of Dairanger (white ranger) was with the five Zyuranger (MMPR). But I don't like the image of the white-legged 5 Rangers with the black-legged Silver Ranger. But who knows? Again, I say it. So its all just speculation right now! It is anyone's guess really now. 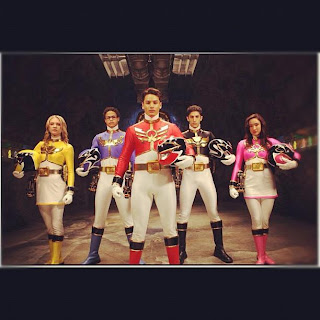 The Power Ranger Instagram has added this new pic of the Megaforce Rangers without helmets in the same base as before, it seems this will be the headquarters. On the right side, there are the Ranger figures, one is green and on the left side we see yellow and black so come to your own conclusions.
﻿
Posted by Lavender Ranger at 6:39 PM

I really do think people are getting their hopes up too much. The disappointment is going to ensue quite quickly when they learn that things are not what they want them to be. Personally, I don't believe they are ranger keys. If they are, I don't think they'll function the same way that the Gokaigers uses them, especially if they use the Goseiger suits the entire time, which is what the picture is hinting.

Can't have Ranger Keys without Mobirates. Maybe they're just a cameo.

I think for the second half the Rangers may have the Gokaiger suits.