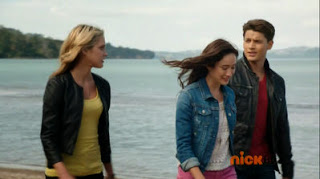 Summary:
In the Command Center, the five enter to Tensou freaking out. Gosei tells them that the Wild Sword had to be sealed because it was uncontrollable. It is trying to break free and is buried in the Black Mountain. They walk outside the building in the beach. The teens wonder how powerful this must be but it had to be if it was buried. They say how freaked Tensou was. Jake says he calmed him down, Gia calls him the 'robo whisperer.' Vrak just happens to be in the forest and hears about the Wild Sword and wants to get it. They see explosions in the city (which happens to be outside of the forest) and head off towards it, even though Tensou doesn't detect anything. 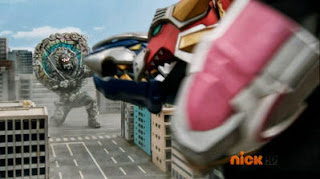 They insta-morph and insta-roll-call. Distractor is a giant and talks to them. They call their zords and form the Gosei Great Megazord. Distractor falls back and acts like they hit him twice. He calls 'phantom creatures,' Psycho Tick, Hisser and two that weren't seen before, they were only in Goseiger (this has happened before in MMPR, Wild Force and a couple other seasons). Vrak lets out the Wild Sword but there is a force field that only good can enter. They slash at the monsters but they aren't hurt. Robo Knight blasts at Distractor, he appears big. He tells them that the monsters are illusions. They find out the monsters are fake. Robo Knight fight a normal sized Distractor, it seems whatever hologram he was producing, Robo Knight goes into the field of his hologram and thats why he appeared big. 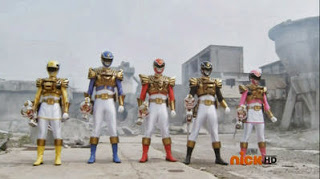 Robo Knight tells the Rangers to go after the sword, they go as he fights the monster. Vrak waits as the Rangers arrive. He says it is his and he fights them. Jake makes a bad booger joke which we saw in a preview for the episode. Vrak retreats. The Rangers go through the force-field and Troy pulls it out and it rebels and flies away. Vrak snatches it. Distractor is telepathically told to finish Robo Knight. Vrak slashes the Rangers back with the sword. Distractor and Vrak retreat. The Rangers struggle out of the hole. Vrak blasts at some buildings in the city. The Wild Sword resists Vrak so Vrak shocks him with electricity. Robo Knight attacks them. The Rangers arrive as well. 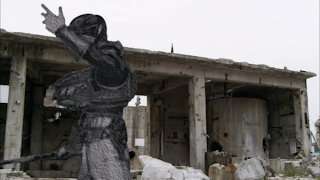 Vrak powers up Distractor, he calls more Phantoms, two more monsters that were not in Megaforce and they can actually hit the six. The Rangers fight the monsters. Robo Knight fights Psycho Tick. The Rangers go down. Distractor attacks them with his eight legs. Vrak and the monsters line up. The Wild Sword resists again. It blasts everything around it. The Rangers land in rubble. Gia says it is fighting against his wishes. Troy figures out the Wild Sword wants to be good, that they must tame it, that they are worthy. Troy drops his sword and grabs the Wild Sword as Vrak let's go a blast. The gang believe in Troy. In another dimension, Wild Sword speaks to Troy and he tames it. 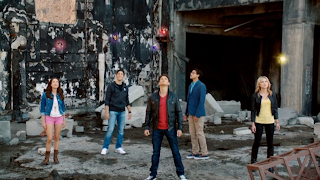 Vrak knocks Troy down. Troy calls it and the Wild Sword comes to them, Gosei says they must take control of their Ultra Zords. They appear around the five and they receive their Ultra Swords. They change into Ultra Mode. Vrak fights them. They knock him down and gets striked by Troy thrice. Distractor comes in and has his monsters fight them. Vrak leaves. Robo Knight watches. Hisser turns Jake to stone and he breaks free. The mummy tries wrapping Emma and she burns it with her Phoenix Flame. Gia bites Psycho Tick. Noah fights the blue monster and Troy fights the two ugly ones. The five unite their Dynamic Strike and destroy all the monsters. 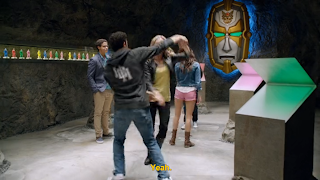 They de-morph and the Ultra Zords swirl around them. Troy says they must use this power that they won't let the monsters hurt the Earth. Back at the command center, Gosei congrats the Rangers. Jake says he thought the dragon would eat Jake. Noah says he was brave. Jake says to celebrate and has Tensou play music. Jake and Gia dance even though she protests. Troy goes to look at the Keys. Jake turns around,m Gia trades places with Emma. Jake notices, Emma shurgs. Gia asks Troy whats wrong. He says he was thinking. She tells him he was brave and that he should relax and enjoy the party. She drags him in to dance. 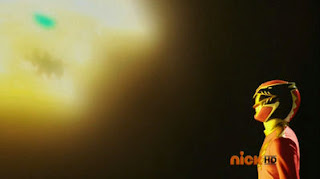 Review:
Good ep, now we got locations and a better understanding where everything else. The new Command Center is at a beach near a forest outside of the Ranger's city. I liked the ending, has some potential Gia-Troy shipping. Screen caps are clearly from Hulu, I apologize for them not matching the descriptions but I am kinda busy. It is an admitted rush job.
Posted by Lavender Ranger at 10:30 AM