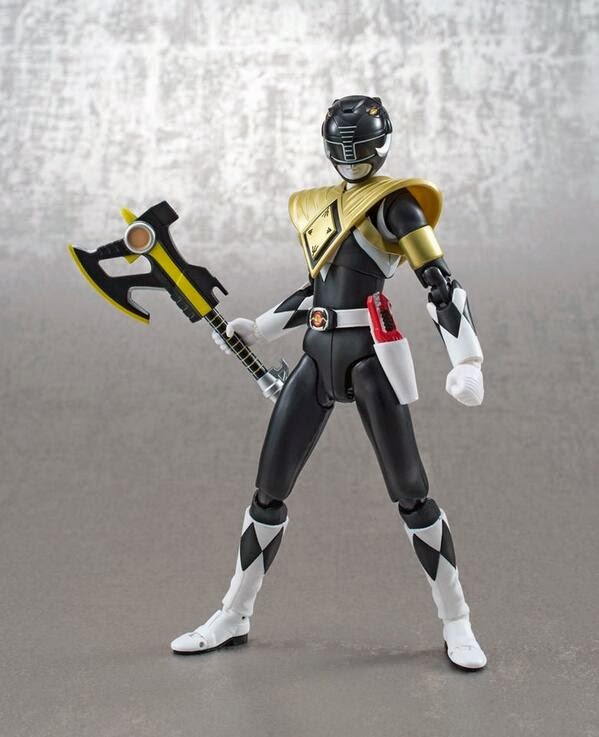 Tamashii Nations has announced that for this year's San Diego Comic Con, they will have the S.H. Figuarts exclusive of Mighty Morphin Power Rangers' Armored Black Ranger. He was seen in "An Oyster Stew" in the first season of Power Rangers, Tommy gave the Dragon Shield to Zack, which was exclusive Power Rangers footage shot by Toei and is called by fans as "Zyu2" and was not in Zyuranger. Some people were commenting that he does not have a good Power Morpher like the Armored Red Ranger and Green Ranger but on the show, he had a silver one. People wonder about this, my theory--in a show way, it is that since Tommy transfer his powers from the Dragon Coin to Jason, then his morpher became gold as well. But in this episode, Tommy just lent Zack his shield and not his powers completely so his morpher remained the same. A price hasn't been announced yet. The possibility of this figure was mentioned at a previous convention before. Lord Zedd was also mentioned, hopefully we'll see him some time in the future.
For more information and photos:
https://www.facebook.com/Tamashii.USA/posts/800176410001526
http://blog.samuraicast.com/tamashii-nations-san-diego-comic-con-2014/﻿
Posted by Lavender Ranger at 11:01 PM