This is my idea for a Power Rangers themed park. Must I say this isn't real? Yup, it isn't real. It is inspired by a fan drawing of a Star Wars Land. 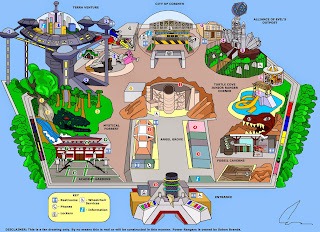 I have discussed theme parks before but here is my full blown idea. 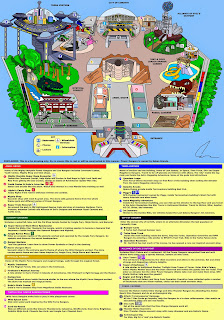 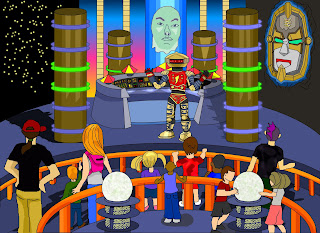 1 Mighty Morphin Super Mega EncounterInside the Command Center, help Alpha and Zordon in Rad Bugs to fight Lord Zedd and Rita from getting the Zeo Crystal, similar to Island of Adventures' Spider-Man ride. Gosei makes a surprise appearance in which he begins to speak but Zordon tells him to keep quiet. 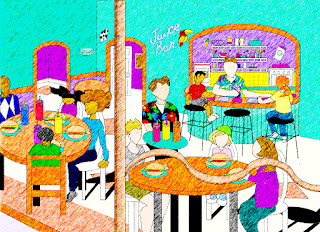 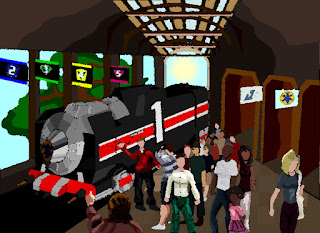 5 Super Train MonorailGo around the park in the Lightspeed Rescue train and stop at Academy Gardens, Terra Ventura, between Corinth and Alliance of Evil's Outpost and between Fossil Caverns and Turtle Cove. ACADEMY GARDENSIncludes a waterfall, lake, and the Pai Zhuq temple hosted by Jungle Fury, Ninja Storm, and Samurai. Meet and Greet with Green and Black Power Rangers.Pai Zhuq TempleA replication of the Pai Zhuq Temple from Jungle Fury, inside find the Jungle Karma Pizza, Storm Chargers Store and Shiba Clan Theater.6 Super Samurai Stunt Show SpectacularInside the Shiba Clan Theater, watch a training session to become a Samurai that becomes a battle between the Samurai Rangers and Nighlok.7 Jungle Karma PizzaEnter an accurate replica of the pizzeria worked and operated by the Jungle Fury Rangers. Go upstairs and discover the secret headquarters. 8 Ranger GardensTour the gardens. Learn how to draw Power Symbols or Kanji in the clearing.
9 Storm Chargers StoreSouvenir shop in the extreme sports theme of where the Wind Rangers worked. The store carries sports items and also items inspired by Jungle Fury, Ninja Storm and Samurai.


MYSTICAL FORESTHome of the Mystic Force Rangers and magical beings, walk through the magical forest. Meet and Greet with Yellow Rangers.RootcoreInside Rootcore, there is the Fireheart's Mystical Journey, Rockporium and Mystical Desserts.


10 Mystic TreehouseIn the Magical Forest, kids can play in the treehouse.
11 Fireheart's Mystical JourneyA ride similar to Harry Potter in Islands of Adventures, ride Fireheart to fight Koragg and the Master.12 RockporiumMusic/Souvenir store inside Rootcore similar to the one where the Mystic Force Rangers worked. The store has musical and magical items. 13 Ernie's Brain FreezeErnie's FroYo Dessert shop from Megaforce inside Rootcore.TERRAVENTUREName of section and the building, home of Lost Galaxy, In Space, Time Force, SPD and Super Megaforce Rangers. Travel to far off planets and interact with aliens. The 'city' inside the top main pod is just a photo, inside it holds the Astro Megaship Adventure. Some of the pods are fake and some hold attractions such as the Piggy's restaurant and Galactic Arcade. Coming soon: hotel resorts in the other pods. Meet and Greet with Blue Power Rangers.
14 Quantum LeapsTime Force-theme Souvenir shop on first floor of the building when exiting the elevator from the Astro Megaship Adventure.


17 Astro Megaship AdventureInside the Terraventure building, you can ride up the elevator to the top floor and you travel in the Astro Megaships like Star Tours in Hollywood Studios. Travel to Mirinoi, Eltar, Aquitar, KO-35, Sirius, and Andrasia.

18 Jet Jammers Similar to the Dumbo Ride, ten vehicles based the Lost Galaxy Rangers' Jet Jammers. This is outside of the Terra Venture building. CITY OF CORINTHEnter the domed city of Corinth, where in an alternate dimension the last populace of humanity has existed. Meet and Greet with Sixth Rangers.
19 Turbo Race Track
Inside the main building inside the dome city, help the Turbo, Operation Overdrive and RPM Rangers by entering a ride similar to EPCOT's Fast Trak. Ride in the Turbo Falcon Zord. 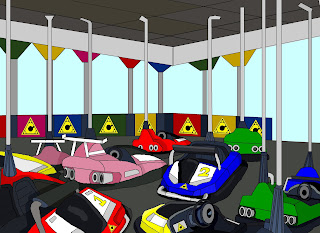 
21 Operation SouvenirsMr. Hartford has lost much of his money, he has opened a race car-inspired souvenir shop. ALLIANCE OF EVIL'S OUTPOSTIncludes Rita's Palace and a restaurant. All the Power Rangers vanquished foes and arch villains have taken over a spooky hideout, beware all who come. Meet and Greet with your favorite bad guys. 23 Tower of DarknessInside Rita's Palace, a ride similar to Hollywood Studios' Twilight Zone Tower of Terror. Enter Rita's Palace, where Mystic Mother says she has been reformed and invites the guests into her hotel. They enter an elevator but the other Power Rangers villains take over and make them drop. Can Mystic Mother help save the guests?22 Onyx TavernThe evil tavern frequented by the vilest monsters and aliens in the universe. Eat and drink strange and disgusting culinary delights. 24 Keglar and Norg's ShackKeglar from Lost Galaxy and Norg from Operation Overdrive have collected quite a number of knicknacks that are villain-related, check out their small souvenir shop. TURTLE COVE JUNIOR RANGER CORNERWild Force Rangers invite kids to play in this playground corner. Meet and Greet with Pink Rangers and other female Rangers.25 Wild Splash ZoneKids mini water park inspired by the Wild Force Rangers.26 Zord-Go-RoundRide on different zords like Unicorn Thunderzord, Catastros, Giraffe Zord, Deer Zord, Brightstar, Dolphin Ninja Zord, Phoenix Zeo Zord, and Jungle Fury Cheetah Zord.FOSSIL CAVERNSUncover the history behind Dino Charge and Dino Thunder Rangers by attending the Dino Museum and do an archeological dig. Meet and Greet with the current team of Power Rangers. 27 Attack! Tyrannosaurus' RampageAll the T-Rex Zords go haywire, help the Dino Charge, Dino Thunder and Mighty Morphin Rangers in a in-door rollercoaster. Also watch an educational video and see real fossils.28 Dino CafeEat at the same cafe that the Dino Charge Rangers work at!29 Thunder Strike SouvenirsDino Thunder-theme souvenir shop with many dinosaur and pre-historic items. 30 Archeological DigFor kids, dig for a 'real' pre-historic fossils.
Posted by Lavender Ranger at 7:48 PM

To be honest, I actually had this idea for a Power Rangers attraction at Disney's Hollywood Studios (when Disney still owned the rights to Power Rangers, of coarse)

it's called "the Power Rangers Super Battle Chamber", it's basically like the Medieval Times restaurants, with watching gladiatorial combat while eating a meal, only have the food be food from McDonalds and more, the whole place filled neon lights and techno stuff, the knights would be replaced with power rangers, and the king and princess is replaced with Zordon, Alpha, and a mysterious alien warrior named The Chancellor of Champions, who offers a "special prize" at the end of the day to winner of the whole tournament

the way it'll work is that 6 8-man tournaments with the random rangers from previous teams, and the this would work is that the first round will be just martial arts and their team's standard weapons, the second round with let them use their signature weapons, and the final round will get other rangers of the two finalists' teams in one big battle, and what makes this special, that you can buy a ticket and choose one of the 8 rangers for that ticket to represent (they'll also be monitors showing bios of all the rangers competing, and if that ranger wins, you get a chance to win a prize after the tournament which you can redeem when you leave the park, and also they'll be a championship tournament for the day, where the 6 winners of the previous tournaments will fight for a chance at the "special prize", the tournament is the same, except the first round will be two matches of 3 rangers with one being eliminated from each match, then it's the same with the one ranger from one match fighting another ranger from the other, and then the final round happens, and at the ceremony to get the prize, it turns out the Chancellor of Champions was really Lord Zedd trying to get the rangers to fight eachother for his amusement, this leads to all teams of the 6 finalists coming together to fight a bunch of various foot soldiers from different seasons, and the winner of the whole thing's megazord fighting Lord Zedd, also during the championship tournament, if you originally placed a ticket on a ranger that made to championship, if that ranger wins, you get a chance to win a big prize (like a trip to Disneyland or a Disney Cruiseline Vacation)

what do you think is that a good idea?