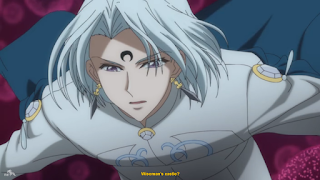 Summary:
The Sailor Senshi tell Pluto they are going into the space storm to get Mamoru, which is a dangerous task and she finally gives in. Mercury has her visor on. The six Sailors walk in the storm. Pluto says you need a time key in the area they are. She thinks Chibi-Usa had no key and got lost in the storm. Usagi thinks he went after her, she says she knows what he is thinking, that Chibi-Usa is precious to him. Her tears hit her arm. She is mad they are separated again. Luna-P falls in Pluto's hands. Pluto wants to go back. Usagi faints. Meanwhile in a cave, Demande and Saphir wake up. Saphir wonders for Rebeus. Black Lady tells them they are under the reactor. The fires of the planet Nemesis have begun to react. They ask who she is. She grabs Saphir's hand and they float down into the interior of Nemesis. 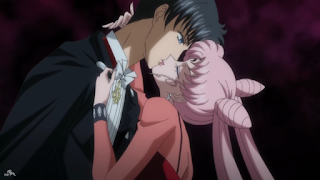 She shows them where Wiseman's new castle will be. Wiseman welcomes them. Wiseman indentifies the woman as Rabbit. Demande is surprise she changed sides. Black Lady says Wiseman's will is true. Saphir asks for Rebues, she says Wiseman finished him. Demande asks who Wiseman is. His eyes glow and attacks Demande but the attack goes to Saphir. Wiseman then hits Demande, he tells them to serve him. Saphir and Demande are now under his control. Black Lady snaps her fingers and they get stronger black crystal earrings. Wiseman has the silver crystal now, he wonders why it doesn't show off power. Black Lady says it belongs to the queen. Wiseman wants the queen and Sailor Moon, he hands the crystal to Black Lady. Demande and Saphir don't have faith in her. Black Lady wants to launch another monolith. 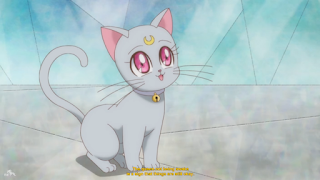 She shows off "Endymion," Tuxedo Kamen who seems to be in a daze. Saphir and Demande see Nemesis glow. Black Lady kisses Tuxedo Kamen. Usagi dreams of an adult Chibi-Usa with Mamoru, she wakes up in her own room with the girls and her mom. Her mom thinks she tripped in school. Luna P arrives and it was fixed and it erased her mom's memory. The girls are happy to see Usagi smile. Usagi wants to bring Mamoru and Chibi-Usa back. The girls say she can count on her. Luna is happy Usagi is strong. Back at the Crystal Tokyo castle, King watches over Serenity. Diana talks to the king and tells him to cheer up. In the past, the girls leave Usagi and see the sunset. Usagi prays for her love ones. The Space-Time Key falls and glows, everything is distorting. 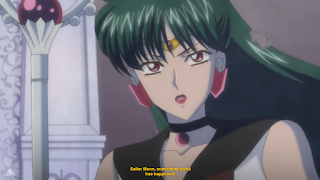 The Sailor Senshi transform. They run to Pluto, she open the door and find there is a second Black Crystal in the desert. Black Lady appears before the crystal-ized Queen Neo Serenity. King faces her. She says she is Small Lady. King says it can't be. She says only members of the Silver Millenium can come, WIseman granted her power. Sailor Moon arrives in. Black Lady tries grabbing the brooch and is kicked out of the palace. King and Sailor Moon run out. The Senshi see Black Lady. She says she is no longer teeny, Wiseman appears and she introduces herself.
Review:
I like how Sailor Pluto is getting more coverage in this anime than in Sailor Moon R. It could had been that the anime had to come out in a specific time and the manga was going too slow for their taste and couldn't fit her in. Now that the manga is a thing of the past, they can delve into much closer like Pluto lighting up in presence of King Endymion. Also, this episode goes further than the original  where Black Lady actually hypnotized Mamoru and kisses him. His future daughter under an evil spell transformed into a woman and is now kissing him against his will. Now we can officially say Sailor Moon Crystal is deliciously dark and has edge. I like the arrangement of the logistics and battles better here than in R.
﻿
Posted by Lavender Ranger at 9:13 AM