Why Swords and Weapons seemingly not selling in the US? 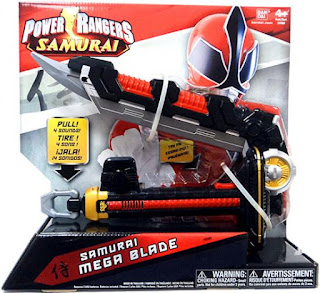 In 2011, the Samurai Mega Blade was considered one of the top ten most dangerous toys of the year as it was pointy. I saw a lot of them sitting on shelves, some stores removed them from stores.
http://www.reuters.com/article/2011/11/17/us-dangerous-toys-odd-idUSTRE7AG1IX20111117

I have a sneaking suspicion that weapons aren't selling well in the United States. I noticed that there are still Super Megaforce Mega Sabers on shelves at Toys R Us, Wal-Mart, Target, Ross, K-Mart and other stores. Toys R Us even had a sale on them a month ago. Now Miami, Florida where I live isnt the best gauge of what is selling as all markets are different but it has been reported by other fans that the Super Mega Saber is also still on shelves. I mean the deluxe one, not the smaller one. I did not buy either for my grandnephew in fear of him poking his little sister in the eye. 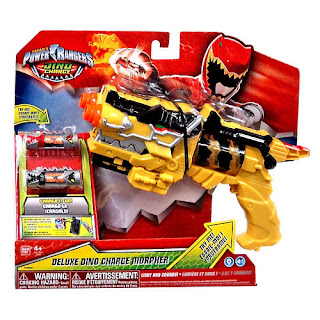 The Dino Charge Morpher grew concerns from fans that being a gun/laser, Bandai and Saban would replace it with glasses like Disney did with Jungle Fury as they replaced knuckle gauntlets with Solar Morpher glasses. It did not get replaced. Recently Toys R Us had a sale on the morpher to get free charger set. And months ago, Target lowered the price on it for a while. I don't know the exact figures but my theory is it isn't selling well but the Super Megaforce Legendary Morpher also sat on shelves. 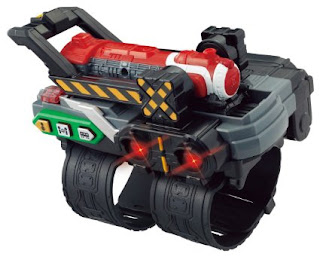 The next series after Dino Charge to be adapted is Toqger, they will have a brace. The series after that is Ninninger, their henshin device or morpher is a sword (below). Rumors are that Saban Brands thinks trains won't sell well so they might skip Toqger like they skipped Go-Busters. It is not yet known what will occur. I don't like the idea of using weapons as morphers, I don't think they will sell well in the United States. Because the ones buying it are parents, not kids. Sensibilities are different in the west than in the east. We can have a big debate about Bandai or whoever are the big wigs in charge afraid of making toys that are 'pointy' or 'violent', but they go by what sells. 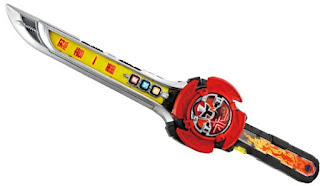 In Japan, I am guessing a lot of kids aren't reported being stabbed by toys. They are raised different and the culture is different. Now that I have my grandnephew and grandniece and am an elementary teacher, I am wary of buying them or giving them a sword or a gun toy. Originally I didn't want to give my grandnephew a black gun but was fine with red or yellow but his mother, my niece is against it too. I mean, sure you guys hear a lot "Now that I have kids, it's different..." I am not saying they shouldn't make them. I am not saying they are bad. This is just my theory as to why they might be selling well and might be sitting on shelves.

Posted by Lavender Ranger at 8:48 PM

The weapons don't sell because they make them undersized for toddlers. They hardly ever make them big enough to bother buying.

The basic roleplay swords are pathetic. I saw a kid who couldn't have been more that seven with a spin sword a few years ago, and even in his tiny hands it looked more like a larger knife than a sword.

Then there're the so-called "Deluxe" weapons, which are larger but as you noted, tend to become shelf warmers almost immediately. It's like BoA just can't win.