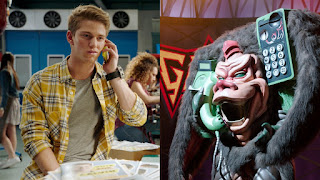 Summary:
Calvin is late for picking up Hayley. They arrive to school and both Clavin and Hayley want to run for class prsident. Brody and Sarah agree to help Calvin and the others for Hayley. A new monster is copying their voices and repeats them to trick them when they battle Bashers. Calvin does a good speech and Hayley apologizes for saying he was lax before. Calvin still wants to run which surprises Hayley. Calvin gives out cupcakes that are Hayley's mother's recipes which upsets her until she one-ups him with her cake. Monty puts hot sauce on the cupcakes. Then he starts a food fight. The two teams blame each other. 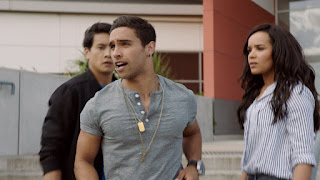 Principal Hastings comes to stop the food fight. That night, Calvin gets a call from the monster pretends to be Levi saying Hayley started the fight. Calvin goes to meet him but gets caught by the monster and his ninja star. Sarah and Brody gets tricked too. The monster kicks down the two and they take their Ninja Stars. Preston and Hayley get called by the monster and they talk to Mick. Mick tells them just because they heard something doesn't mean its true. They bump into Levi, Levi says it sounds crazy. Levi gets a call... from Hayley---which is the monster. Levi has a plan. 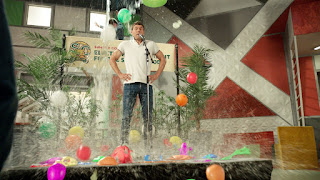 Calvin, Sarah and Brody are tied up. Gold and White come on their bikes and fight the monster. Preston beats up the Bashers in his ninja outfit. White tries trapping the monster but fails. She traps herself and then rises out for a surprise attack and gets the Power Stars. Preston blasts Bashers and save the three. Hayley returns the stars and they morph. The six defeat the monster and he grows. The zords are called. Kodiac Zord does a howl that weakens the monster's sonic howl. Megazords are formed. Back at the school, the kids apologizes. Calvin and Hayley make up. Monty and Victor have a prank. Clavin and Hayley withdraw from the race, Victor stays president and gets the prank dropped on him. 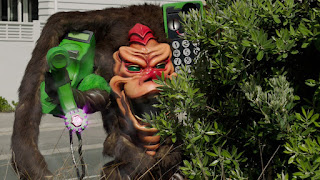 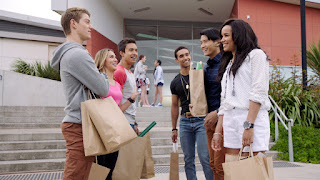 Posted by Lavender Ranger at 1:47 PM