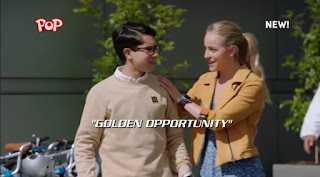 Outside Riptide Gym, Nate and Zoe wait for his parents. It has been four months since they last saw each other. They arrive in a taxi. They hug and they introduce them to Zoe and Steel. Nate told them all about Steel. Steel wants a bedtime story and ice cream and Nate tells him to go so Zoey takes him away. Ben and Betty arrive, apparently, they know them from before. Nate leaves with his parents. Ben and Betty struggle to put the luggage on their cart and they drop one case. Nate wants them to move back home They explain they have to leave tomorrow, stay in one spot but not come home. The parents say what they do is important. They are moving to Costa Rica and want him to move with him. He wants to but says it's complicated. Ben and Betty keep dropping luggage throughout the city. They arrive at the hotel with no luggage. 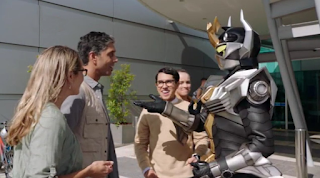 Nate explains the news to the Grid Battleforce. Steel says he can't pass up the chance Devon thinks they can deal without him. Shaw is for it as long as he can train the others. Zoey says Megan can take over the lab, Devon says he can take care of the weapons and Ravi says he can maintain the zords. Steel comforts Zoey. Later, Nate trains Steel to scan flower DNA and talks about missing him. Steel tells him that Zoey and her brother are still close even though he is in college. Roxy attacks them and Nate calls for help. The brothers morph and fight. Zoey and Devon arrive and do Beast X Mode. They do their attacks and Roxy avoids them. She takes the DNA Scanners and leaves. Ravi got stuck under the Zord engine and arrives late. Back at Grid Battleforce, Zoey wants Nate to check her work on a scanner. Nate is excited about their parents' work. 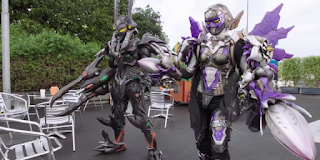 Zoey says she'll miss him and they can video chat. The others arrive and Nate is waiting for his luggage. The Beast Bots tell him they will miss him. Ben and Betty say Nate's parent's luggage were hard to find and invented a device to call their luggage. Nate's luggage explodes in front of them. The Rangers and parents help clean up the luggage. In Cyber Dimension, they make a beetle monster and plan to put flower DNA with Roxy. Roxy thinks it is scorpion. Blaze is jealous. When they find out it is flower DNA, Blaze makes fun of her. Evox says to save it for the Rangers. She teleports away with the beetle bot. Zoey and Steel struggle with the DNA scanner and the weapons short circuit. The Rangers meet the monster and Robo Roxy. They try morphing but fail. Meanwhile, Nate hears what is happening and tells his parents he needs to take care of something. He calls for Cruise. The Rangers are beaten up.

Nate gets all the weapons in a bag at the base and runs with Cruise. Roxy and the monster are shot down. Nate arrives with the weapons. Nate gives the weapons to Cruise. The Rangers morph. Shaw tells them of a Gigadrone, Steel leaves. The Rangers continue the battle. Steel blasts the Gigadrone with his zord. Devon goes to Beast X Mode and does an attack on the monster with Nate, destroying it. Steel asks for help. Devon gets his word and rides the Beast-X King lion. Nate calls the runway and makes the jet crash into the monster. They destroy the monster. Robo Roxy fights Ravi and Zoey. The others arrive with the Ultra Cannon and blast her. Roxy crackles with energy and teleports away. Nate says they have the scanner. Steel and the Rangers tell Nate they don't know what to do and they don't want him to go. Nate's flight is about to leave and the Rangers drive him back. He tells his parents he can't. He explains that a lot of people are counting on him. They say they understand. He admits he thought they didn't love him and now understands what they do is like what they do. The parents say they will see him on Christmas, his mom hugs STeel and he tells them he loves them. The Rangers hug.

Good ep. Sort of bland and repetitive but there you go.