In the spirit of comparing the good guys as they were converted from Japanese to American, I decided to cover the baddies.
Mighty Morphin Power Rangers (1993) and Kyoryu Sentai Zyuranger - 1992 (Zyu is pronounced 'Juu', it means 'Beast'). 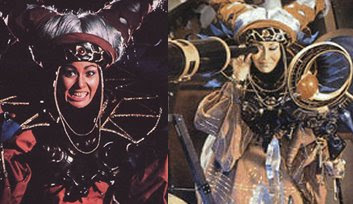 Rita Replusa / Bandora
Ahh, the infamous Rita Replusa. By using the original Japanese footage, we were served a woman whose voice didn't match her lips. After Season 1, this was not done again. We know the basic story of Rita: a evil witch who trapped Zordon in his big head state and was trapped in a 'space dumpster' on the 'moon' and then released. She kidnapped Tommy and made him evil. Once he became good, she made a candle from the time he was under her care. So, she stripped him from his powers as the candle decreased.

Bandora, on the other hand, was a peaceful queen living in age of the dinosaurs. Her mischievous son, who she loved dearly squished some dino eggs and in turn was killed by the dinosaur mother. Bandora swore revenge on the dinosaurs and allied herself with Satan and became a witch. She and her goons were imprisoned on the planet Nemesis by the Shogozyu (the zords) and when the planet came in the orbit close to the Earth, they were released. She allied and betrayed Burai. Bandora constructed a tower to summon Satan from hell. She had to gather thirteen children to be sacrificed. Satan was thwarted but when he returned, he brought her son back to life and they sunk the Shogozyus into the Earth. Eventually, she was defeated and placed in a bin once again and hurled through space.

That wasn't the end of Rita though, in season 2 all American footage was used as Lord Zedd took over and imprisoned her in the dumpster, hurling her into space. She came back and sent once again by the Rangers. The dumpster made its way back, but this time to the palace on the moon. Finster made her look young and restored her size, she married Zedd with a love potion. Once the potion wore off, she discovered he really did love her. Her brother Rito and father Master Vile came by season 3 and she was turned good at the end of Power Rangers in Space. By Mystic Force, it was discovered she was the Mystic Mother (same actress, different character in Magiranger). 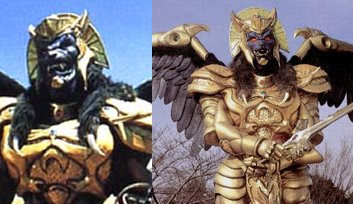 Goldar / Grifforzer
Goldar started as Grifforzer, deadly and evil. Grifforzer went on to have a baby boy with his wife Lami, while Goldar betrayed Rita and became Lord Zedd's right hand man. For some reason, his wings were gone and not explained why but Zedd 'returned' them. Goldar became more of a comically lacky when Rito came along in Season 3 and he was killed by the Zordon wave in Power Rangers in Space. 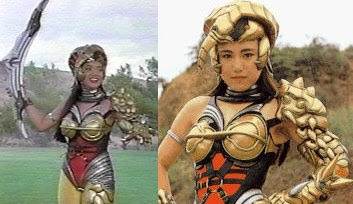 Scorpina / Lami
Scorpina was also primarily Japanese footage in Season 1, only once she was played by an American actress in Season 2 but since Saban couldn't hold on to the actress, she magically 'disappeared' and was never heard of again. Lami was actually Grifforzer's wife. Both had a human form and a scorpion form when giant. Lami was deadly and playful, also was a master of disguises. Scorpina appeared in the episode where Lord Zedd arrived--via footage of when Bandora was captured at the end of Zyuranger--but then disappeared since they didn't have an actress yet. Lami had a human-like child that was captured along with all of them. 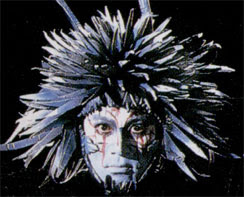 Lokar / Dai Satan
I can't believe I forgot about this guy! Okay, this guy was a major Difference. Lokar was a big head in the sky that Rita would call upon for help to power up her monsters. He is compared to fans as a opposite of Zordon. In Zyuranger, he had nothing to do with Zordon as Zordon wasn't in the show and his counterpart Burai was not a big head. Anyway, Dai Satan was a devil, Bandora worshiped him and turned to the dark side when her son died. He was destroyed, where Lokar just ran away and never seen again. 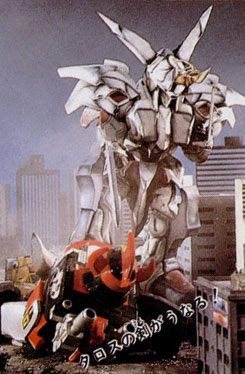 Cyclopsis / Dora Tolas
While it is Goldar's zord in Power Rangers (footage of him in the cockpit was American-made), it was a robot for Bandora's son Kai to pilot with two hypnotized children. In Zyuranger, Kai was killed by a dinosaur and drove Bandora to evil. Kai was resurrected near finale. Originally when MMPR was to end with "Doomsday part 1 & 2," Kai was to be adapted into Rita' son Bubba but that was discarded.

Posted by Lavender Ranger at 5:25 PM