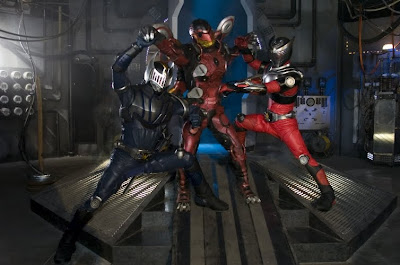 Kamen Rider Dragon Knight has been dubbed in various languages, including Japanese now. It is like cycle, like Kamen Rider Decade Complete Form's headdress. An image within an image. No, they don't say 'Henshin', they still say 'Kamen Rider.' And the 'Sword Vent' stuff has not been dubbed, it has remained in English. It would have been cool to hear 'Sword Ventto' again. I also like how the opening title sequence is in full wide screen and you can see all the graphics and it is not cropped like it is on our TV screens and you can't read their names. I don't know how long this video will remain on YouTube so I am only linking it and not embedding it. Satoshi Matsuda, who played the original Kamen Rider Knight provides the dubbed voice for Wing Knight, playing his character's counterpart.

Here are the links:
Part One
Part Two
Posted by Lavender Ranger at 7:58 AM

Cool. Now lets see if you can locate a Japanese subbed version of Power Rangers RPM.