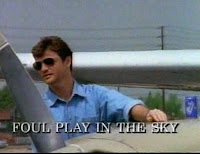 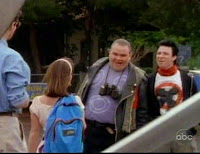 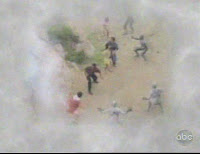 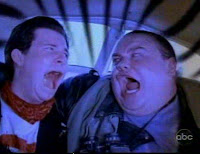 "Foul Play in the Sky"
Kimberly goes on a plane ride with her Uncle Steve (Writer/Producer Doug Sloan) and Bulk & Skull tag along. Squatt poisons Steve to fall asleep and Kimberly must fly the plane with the help of Alpha 5. Meanwhile the Rangers fight the Snizzard (voice played by Bryan Cranston of "Breaking Bad" and "Malcolm in the Middle"). 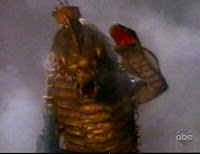 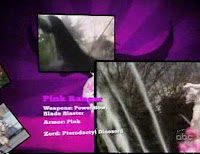 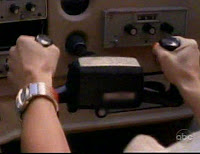 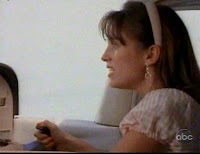 I liked this episode because it showed that Kimberly was just not a bimbo. When Kimberly looks over the mountains, thinking of the time she first met Zordon. When I first saw this, I thought it was going to be a flashback episode, a clip show. But I was pleasantly surprised it wasn't. Because no new episodes aired after this episode for a while, I thought it was like a season finale or something. I mean, I was 11 for god's sake. Anyhoo, love above--Snizzard, that is the suit in new American footage. We never saw Dora Radun in the Bandora's palace, this was a splice-and-dice of old Rita footage with this shot to make the illusion of us seeing Snizzard being made. 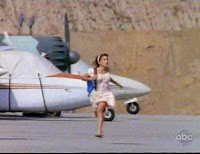 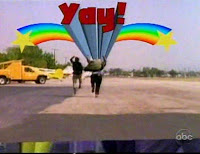 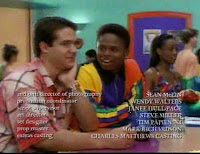 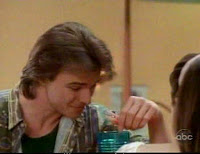 This episode was also the first appearance of my favorite character Angela. Trini and Billy barely appear in this episode. In the end of the episode, some random guy is talking to Kimberly, applauding her for flying the plane by herself. Jason and Zack imitate a woman and a man. And yet more food is dropped on Bulk. In this revision, the graphics are different and more entertaining, except for the hearts--I guess it was also added since the episode airs before Valentine's Day. There is a data card before the commercial of the Pink Ranger and it is dumb because it says 'armor: pink', we know she is pink for god's sake! They could have at least maybe put her hobbies or something.
CUTS:

Squatt putting the toxic in the soda can. I guess they took it out so kids wouldn't get ideas. But that's dumb because he is an evil monster. Anyhoo, I liked this shot because it was another shot of the American Squatt suit. Its the first time we see his face, we last saw original footage of him in "Switching Places."

Posted by Lavender Ranger at 9:20 AM