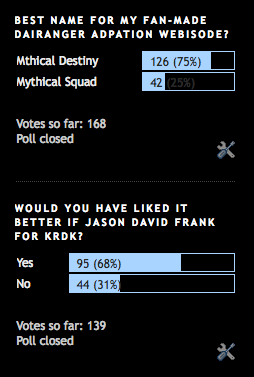 Mythical Squad previously got 57 of 127 votes.

Would you have liked it better if Jason David Frank was in Kamen Rider Dragon Knight?
Yes - 98 of 139
No - 44 votes
I accidentally put James instead of Jason.
Posted by Lavender Ranger at 8:04 PM