Elements of Past Super Sentai in 'Zyu 2' Footage 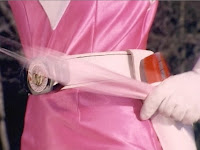 In the episode "Bloom of Doom" which had footage provided by Toei but didn't appear in Zyuranger (now dubbed by fans as Zyu2), Kimberly takes out a string of pink ribbon that she wraps around the foe and electrocutes the beast with. I think it was inspired by past Pink Warriors' ribbon weapons like below Pink Mask of Maskman and Goggle Pink of Goggle V. Maybe there was more that I forgot. 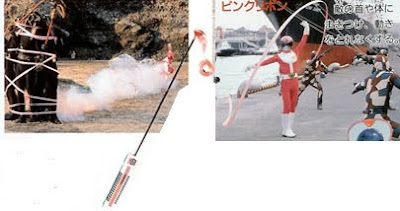 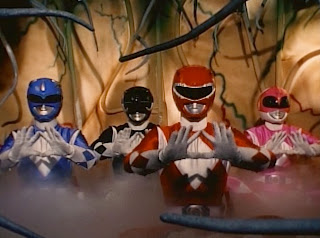 In the episode "Welcome to Venus Island," four of the Rangers ended up inside the Venus Flytrap monster and did some kind of energy tactic that was a bit like when the Dairanger mediate and channel their Chi.

Here are some other exclusive weapons that only appeared in the footage Toei made for Power Rangers: 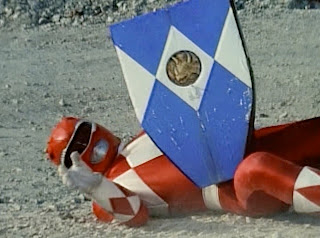 Like I mentioned before, Billy gave Jason a mirror shield in "Power Stealer." It was blue and had the Triceratops symbol. Strangely enough there was two instances of mirrors with the Blue Ranger symbol. 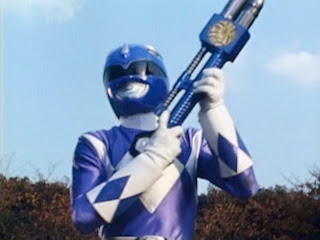 Alpha made a special weapon for Billy in "Grumble Bee" to combat the titular monster. 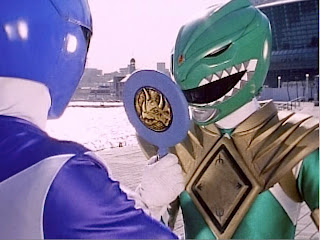 In "Wannabe Ranger," Kimberly had a mirror hidden in the Command Center but it was a blue hand mirror with the Triceratops symbol on it. She gave it to Billy. He used it against the Primator, who was imitating the Green Ranger. 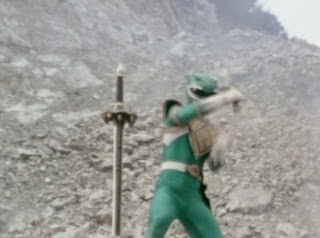 The Sword of Power appeared only in one episode "Green Dream" and the team act like it appeared before but it never was referenced to before. This sword appeared in the Zyu 2 footage.
Posted by Lavender Ranger at 6:27 PM

There was also an episode where the rangers fought clones of themselves (for the second time I think) and the weapons the evil rangers used were the Zyuranger's old weapons before obtained the new ones.

You forgot something about that Pink Ribbon: In FiveMan, FiveYellow Remi Hoshikawa used the Yellow Flute which was transformed into Melody Tact although the ribbon color was Yellow and not Pink! Please update. Thanks!