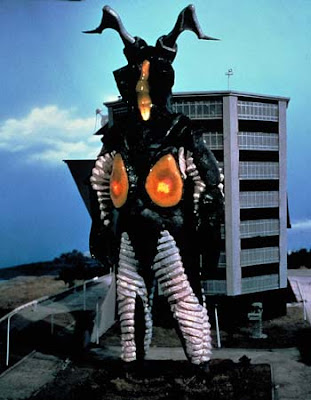 As Ultraman's toughest opponent ever, Z-Ton first appeared in the show's final episode, #39, "Farewell, Ultraman". He was even popular enough to appear again in several subsequent Ultra Series. "Zetton" is also the name of the planet from which he originated, as well as the aliens (Alien Zetton) that utilize him. In Ultraman's finale, an armada of alien ships arrive, plotting to conquer the Earth, and their plan was surely an effective one, almost succeeding where Ultraman's previous adversaries have failed. The aliens target the Science Patrol Headquarters and Ultraman, the only obstacles in their conquest. However, the Science Patrol chases and eliminates all but one of the alien vessels. Adding to the Science Patrol's difficulties, one alien infiltrates the headquarters and subdues Doctor Iwamoto. This alien then shapeshifts to disguise itself as Doctor Iwamoto, knocks out Science Patrol team member Fuji, and sabotages much of the Science Patrol's communication equipment and scientific instruments. 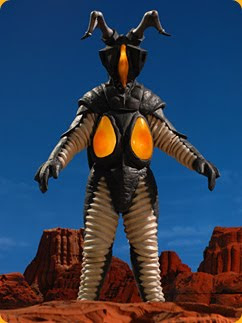 The Science Patrol eventually chases down the alien and kills it. Doctor Iwamoto and Fuji manage to recover. The one ship that evades the Patrol emerges from being burrowed underground and surfaces just outside of Science Patrol Headquarters, releasing Zetton to finish the job. Hayata transforms into Ultraman for one last time. Ultraman and Zetton battle but Zetton easily withstands each of his attacks until Ultraman falls, his Color Timer was damaged by Zetton after absorbing and redirecting his own Specium Ray. Ultraman falls unconscious and, left prone on Earth's surface, faces the prospect of dying without direct stellar radiation to revive him. Zetton proceeds to set fire to Science Patrol Headquarters. However, Doctor Iwamoto presents a newly-developed weapon, and with it, Science Patrol member Arashi succeeds in destroying the Zetton. The Science Patrol douse the charred remnants of their headquarters. 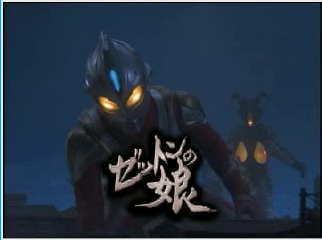 With Ultraman at death's door, he is suddenly saved by his superior, Zoffy, who comes to Earth in a Travel Sphere to rescue him. He not only restores Ultraman's life, but separates him from Hayata's body, restoring the Earthling's life as well. Zoffy and Ultraman then fly back to their home world on the Land of Light in the Nebula M78. However, Zetton was brought back to life as a pawn against Ultraman and his kind in some of the subsequent Ultra Series. He appeared in Mega Monster Battle: Ultra Galaxy, Ultra Galaxy Mega Monster Battle: Never Ending Odyssey, Ultra Galaxy Mega Monster Battle, Ultraman Mebius, Ultraman Max, Ultraman Powered, Redman, and The Return of Ultraman.
Posted by Lavender Ranger at 10:34 AM