We've seen the regular keys, but here are the Sixth Ranger keys.

Dragon Ranger
Green like any other Green Ranger key, with the Zyuranger symbol.

Kiba Ranger
Has Dairanger symbol on key with white.

Mega Silver
His key is a dark shade than the white ones.

Time Fire
Surprisingly, his key is darker red, it is the same shade as Kabuto Raiger's.

Gao Silver
Has the general Gaoranger symbol on the key, not the one he has on his belt.

Shurikenger
No back key that I can find.

Everyone is commenting on the shade of green of Shurikenger but look at him in the promo that came out a couple of months ago where he is a different shade of Dragon Ranger, were in real life they are same color.

Abare Killer
Gokaiger is considering him a sixth ranger, I also found his key in TV-Asahi, the only live-action pic of the sixth ranger keys we've seen.

DekaBreak
Key back not available.

Deka Master
Eh???!!! Wow. Of the Dice-O keys, it seems that the only extra hero to have a key. For those that don't know, Deka Master is not part of the sixths of Gokai Silver. The key seems to be the same shade of Hurricane Blue's.

MagiShine
The back Ranger Key is gold, not yellow.

Gosei Knight
Key is silver, maybe a bit lighter than Go-On Silver and Bouken Silver. Strange to see him stream-lined.

There is debate about the shade of color on the back of the keys.

Interesting, Kuwagata is darker than Hurricane Blue's. And Magi Blue's seems to be the same shade as Gokai Blue and Deka Master. Tricera Ranger, Tenma Blue, OhBlue, Ginga Blue, and Bouken Blue seems to be a regular blue. Strange that Gokai Blue is a lighter shade, since his suit is not a light shade. 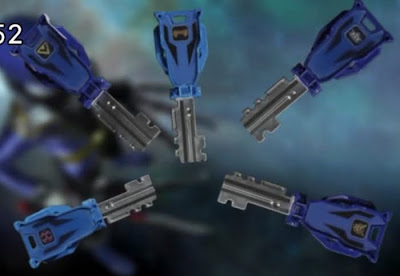 But here Shinken Blue and Gosei Blue's keys aren't the same shade as on the show.

This is the color of the actual key of the toy of Gokai Blue.

Miss America seems to be the same shade of pink, on the show the pink keys are slightly different shades. Miss America, Momo Ranger, Ptera Ranger, and Gokai Pink 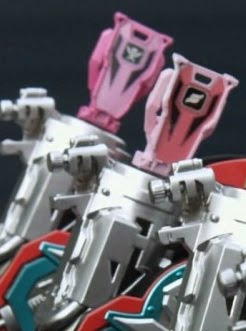 Momoranger's ranger key is a lighter shade on the show.

Battle Kenya, Mido Ranger, Gokai Green
Second Row: Shishi Ranger, Oh Green, and Dragon Ranger
Everyone is upset that the Battle Kenya key is green because he is mostly black. We have to wait and see on the show, but I doubt its really green. It is a darker green than Dragon Ranger, which is a darker shade than the other Green keys.

My own renditions of Deka Break and Shurikenger keys

I made the key light green like the image of Shurikenger seems to be. The two above are photoshopped.
Posted by Lavender Ranger at 10:39 AM

do you think you can hijack the page & get the ranger key pics?

nope i've just been saving them.

Ive featured your articles on my blog, if thats ok?

And not so much as a thank you to me for pointing out that you could access these pictures from the Dice-O site.

thanks so much. yeah, i've been busy.

The Battle Kenya Key is dark green because, at the time, black was a taboo color for a Sentai Ranger (Goggle Black had yet to break the mold).