Wrong Sounds in my Ranger Keys I Bought 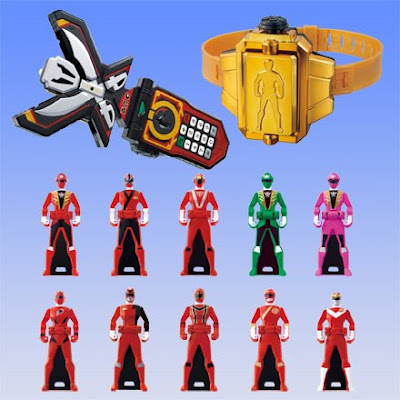 I won the Gokaiger Mobirates and buckle set with 10 Ranger Keys in a Yahoo! Auction and it was sent to me thanks to Celga (you must pay fees). But I realized my keys don't make the right sound. I checked Rangerboard but haven't seen anyone else who has had this problem. There doesn't seem to be anything wrong with the package or toys, it is the official Bandai toy from Japan and of great quality and I used new batteries. Some keys do work. My Gokai Red, Gokai Pink, Magi Red and Go-On Red keys work.

I am not mad, it is interesting, I think it is quirky.

Above are the real keys and below are mine, the grooves look the same and the numbers are exactly the same, they are all identical. 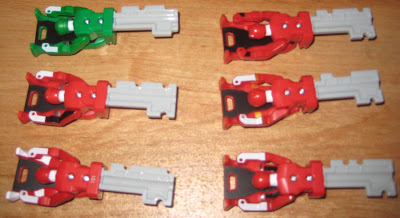 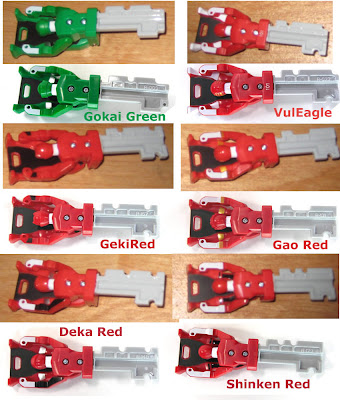 Posted by Lavender Ranger at 10:35 PM

FINALLY, a video with YOU in it!

yeah with my stuttering, I don't like making videos. I do know it is a momentous occasion.

You're voice is much better. I remember one thing you posted here before you were calling into someones podcast and you were stuttering much more than in this video.
Have you been taking special speech classes?
Congrats man!

were those DX or capsule toys? If Capsule someone could have assembled things wrong on purpose to screw with the buyer AKA you.

i think the keys heads (The grey part) may be the wrong ones, did you check this site to see the heads?: http://ooebihara.sakura.ne.jp/gangu2/ganngu636b.html

I haven't, it comes and goes. I just hate talking on the phone, phones suck. With this, I am more under control.

guess my theory was wrong

I just got my Narikiri set too, and when I put in my GokaiBlue Key it said Megaranger. But I found that it's because of how hard you turn the key, at least for my Mobirates. If you just turn it enough without much force, the regular sound is played. Not sure if this helps, but I thought it was interesting.

Interesting, I thought of that and I did it but same thing. I'll have some different people do it and see what happens.