Henshin0 Reviews
Due to personal scheduling conflicts and lines constantly skipping, my review might seem badly done, so I apologize for that in advanced, but please bare with me on this.
Synopsis:
The episode starts off with Emily looking around for the other rangers who seem to be missing. The actuality is that they are sneaking around the Shiba house trying to set up a surprise birthday for her. Mia offers to bake one, but the guys quickly shout "NO!" and save by telling her that "you don't wanna risk it" and Antonio already ordered one from the bakery.
Meanwhile, Octoro warns Dayu about hanging out with Deker while constantly annoying us, the audience with his catch-phrase "ooo-a-ooo". They notice the Sanzu is rising, and the monster, Split-face volunteers to make it go higher.
Elsewhere, Antonio tries to catch a big bass for Emily, and on the way back, he crosses paths with Deker. He mistakes Deker for a shisherman. After being corrected, he offers him lunch and to try his new "baby barracuda" recipe. 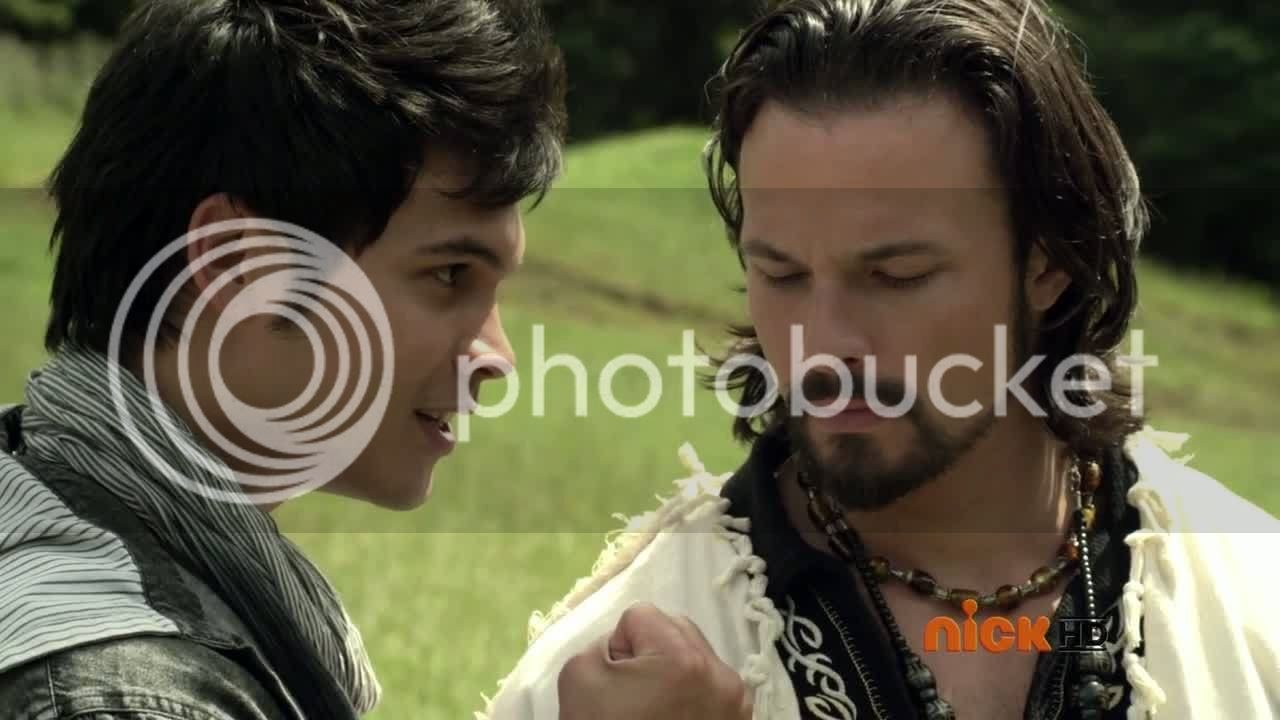 Split-face steals peoples' spirits, and splits his body apart and over-powers the rangers and steals Em's spirit. He tells the rangers that the souls will be permanently his in 24-hrs, up to which time, he'll stay in the sanzu river, where no mortal can enter.

While the victims+Emily are in a coma, Antonio tries to use the "Live" symbol to bring clawzord to life. The Sanzu rises higher, while the team tries to figure out how to get the monster to come out. Deker appears, and tells the rangers that a mortal can pass into the sanzu by becoming a Niglock, reveiling that Deker did that once, though he has no memory of it. 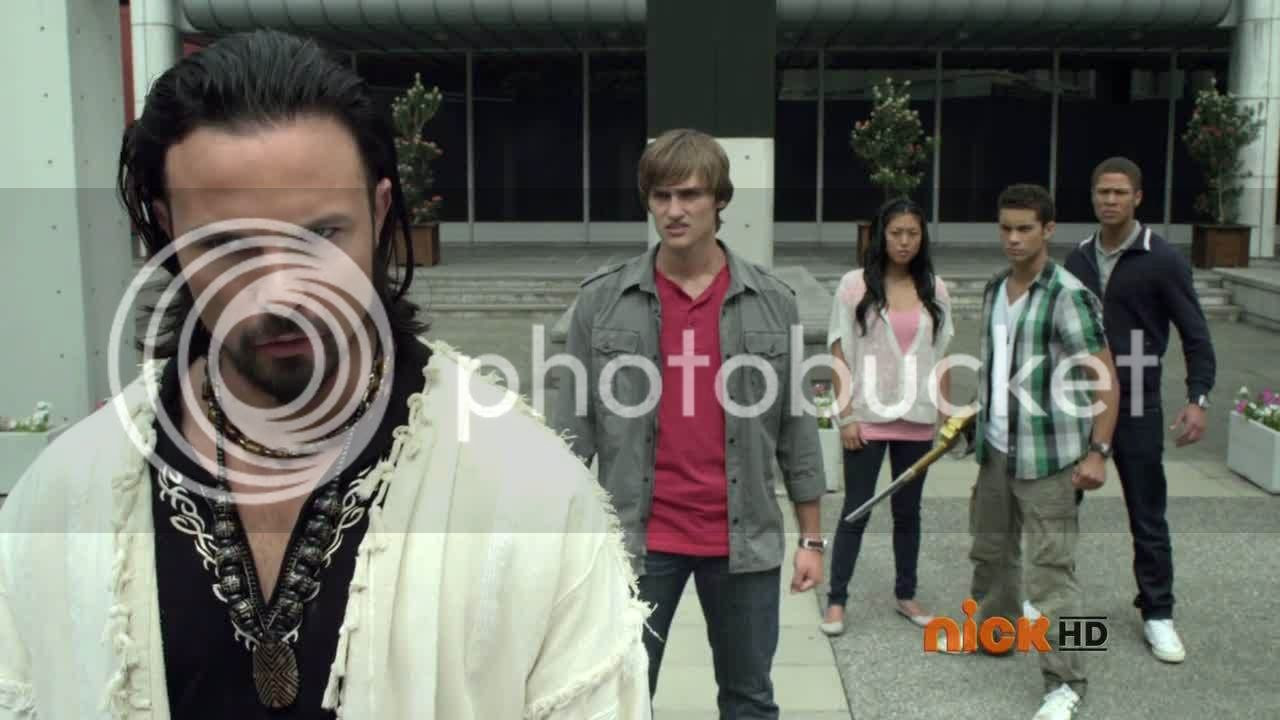 Antonio tells the rangers to use their sybol powers on clawzord. After putting enough symbol power, the clawzord grows to full size, and Split-face is forced out into the human world. As it turns out, in the earlier battle, Antonio marked one of S-F's parts with a program symbol that not only draws him to the clawzord, but also prevents him from seperating, alowing the rangers to defeat his first life. Sadly, they can't use the megazord to fight the second life without Emily. Antonio then summons clawzord and overpowers S-F until he summons giant moogers. Antonio transforms his zord into claw battlezord east and fight some of them off. then he use west and west fan to protect himself, while the lads summon battlewing to fight off the flying moogers so that he can use south and south katanas to fight S-F and finish him with east claws.
Emily and all of the other victims revived, and celebrated her birthday (with the relief of Mia being "busy" while eating the bakery cake.while the octozord WASN'T stolen by a passerby. 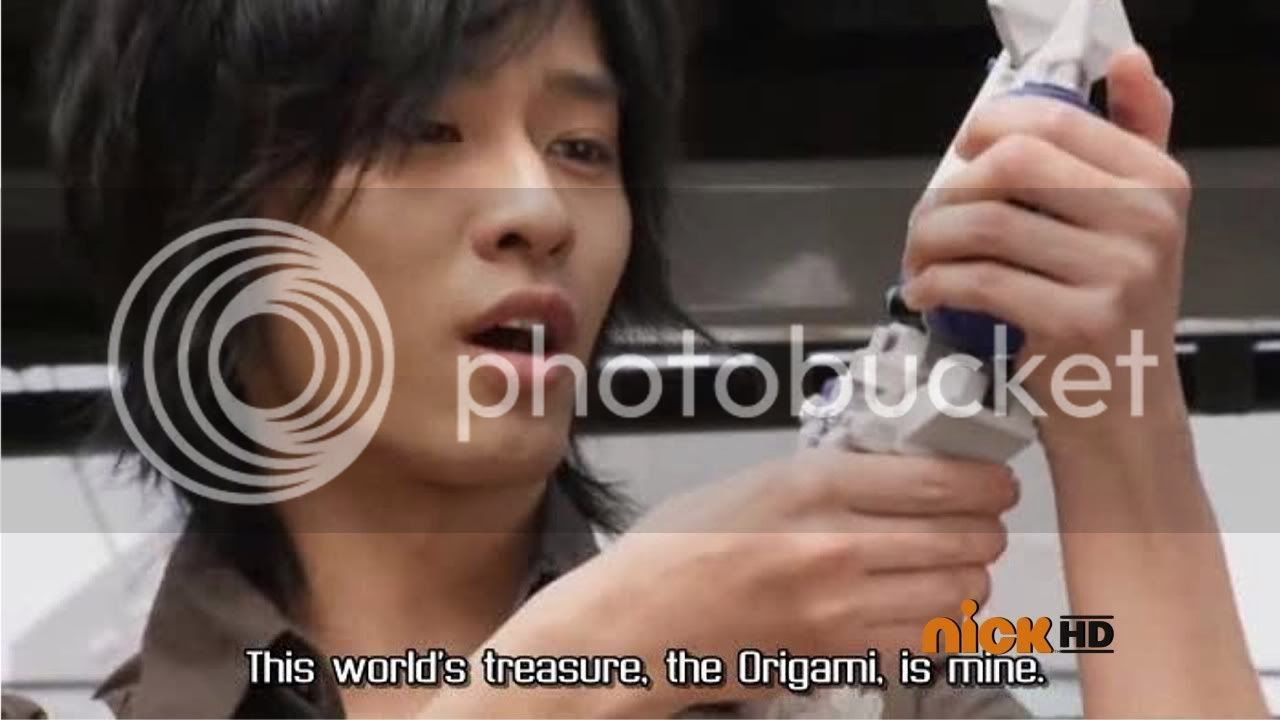 The episode was pretty nostalogic to episode 20 of shinkenger. It does however, feels weird that Antonio and Deker meet so early on in the translation, but it was just as amusing as Genta and Juzo. I'm not surprised that not only was Emily not in a complete coma, but also in the fact that her sister, Cerina is still alive, because PR always had a history of not killing dead people (save RPM). It was cool how Claw Battlezord uses a compass system, just like Ebi origami. There are particularly two things I didn't like about the episode. One, they didn't have Bulk and Spike again; there are so many ways they could have been in the episode, but weren't. The other is that they didn't have Diend kidnap octozord. In the original episode of Shinkenger, Genta walks out and finds Daiki stealing ikagami calling himself "the passerby kamen rider", leading to the interlude of the crossover of Decade teaming up with shinkengers. Saban bought the footage to the episodes, so why not go with it. I also wonder when they will air the skipped episodes. they did infact film shinkenger episode 1. The commercials on nicktoons even has a brief clip the monster saying Octoroo was hit by an "ugly-stick". Speaking of which, why are Octoroo and Octozord called as such, if they are both squids?

For more, check out the Tengen Gate Review
Posted by henshin0 at 5:22 PM

As far as the Octos go, I think it's merely a case of the names rolling off the tongue better than "Squidaroo" or "Squidzord".

first of all, LG body count, is 1, and that one came back, so it doesn't entirely count. but octoroo could have been called "molloskor" and octozord could have been "tentazord"

Given Bandai America's/Saban's/Disney's record of naming things wrong, does it really surprise you that they called two Squids Octopusses? I mean come on, that harkens back to MMPR, with calling the Pteranodon Pterodactyl and the Mammoth Mastodon.
Out of PR examples would be the Digimon Anomalocarimon, called Scorpiomon in the Dub. Or Terriermon being called a Bunny in the Dub. Among others.

terriermon was called bunnymon in the japanese version? but ptera and mastadon are somewhat excusable, because they are too similar to each other, squids and octopi are too different to get the two confused

Terriermon was always Terriermon. But they called him a Bunny in the Dub, when he is clearly a Dog.

Pterodactylus and Pteranodon are both short tailed Pterosaurs, but there is a huge size difference. Pterandon has a wing span around 6-7 metres, while the smallest Pterodactylus Species can sit on someone's palm. Thatt's like saying that a sparrow is the same as a condor.

Mammoth and Mastodon also have a different build. The Mammoth is far bulkier. And in most cases far hairier.

The Hair doesn't, but the build does. And like a I said "usually". The Columbian Mammoth for example is as naked as any other Elephant.

Difference in size does not matter that much when it comes to zords, they are blocky either way. But the core of the issues, is that a niglock is not blocky, and though it is blocky, octozord looks by far more different from tako candroid, Than a robotic mammoth to a robotic mastodon.